Tuesday was a day for changes......Chris and Cherie were vacating their site to move to another site within the park before they head to new horizons later this week....Krash and Karen were coming over, and then Judy and Brian were arriving to replace Gary and Angie who left a few days ago.  To top all that we decided to move from our site into Chris and Cherie's newly vacated site......but I get ahead of myself.

Before we could even think about moving two sites over there was a ton of work to do just unhooking all the stuff I had set up over the past month, so I got to work on that while TLE took care of the inside.  Within 90 minutes we were ready to roll the wheels and move 60 feet south to our new site.  We knew Chris and Cherie were scouting other sites for their move, and would be moving later in the morning, so around 11:30 we decided to take a walk on "south" beach down to the Elk River outlet. 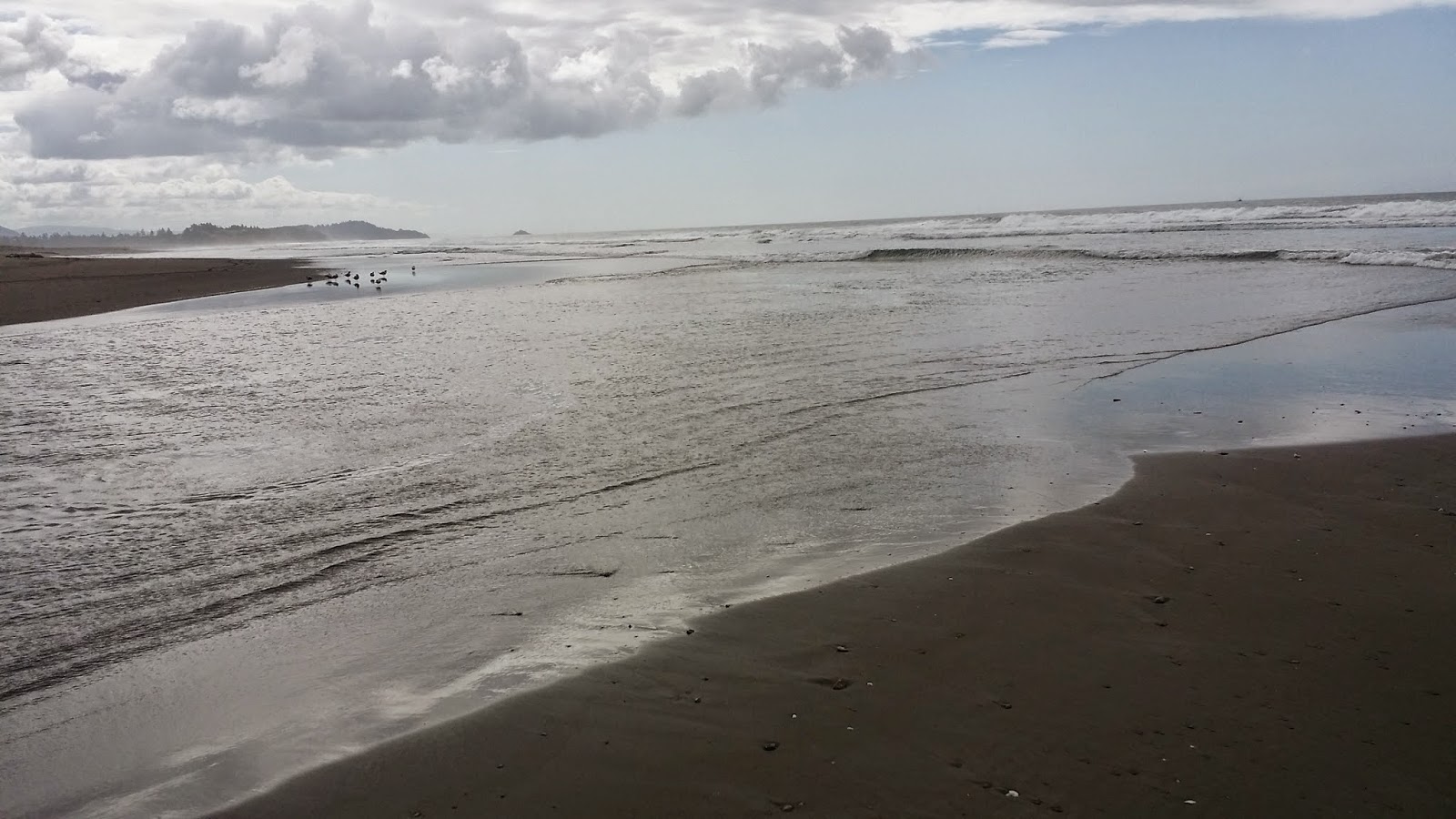 This is the section of beach on which you can drive a vehicle without sinking into the sand, hence all the tire tracks.... 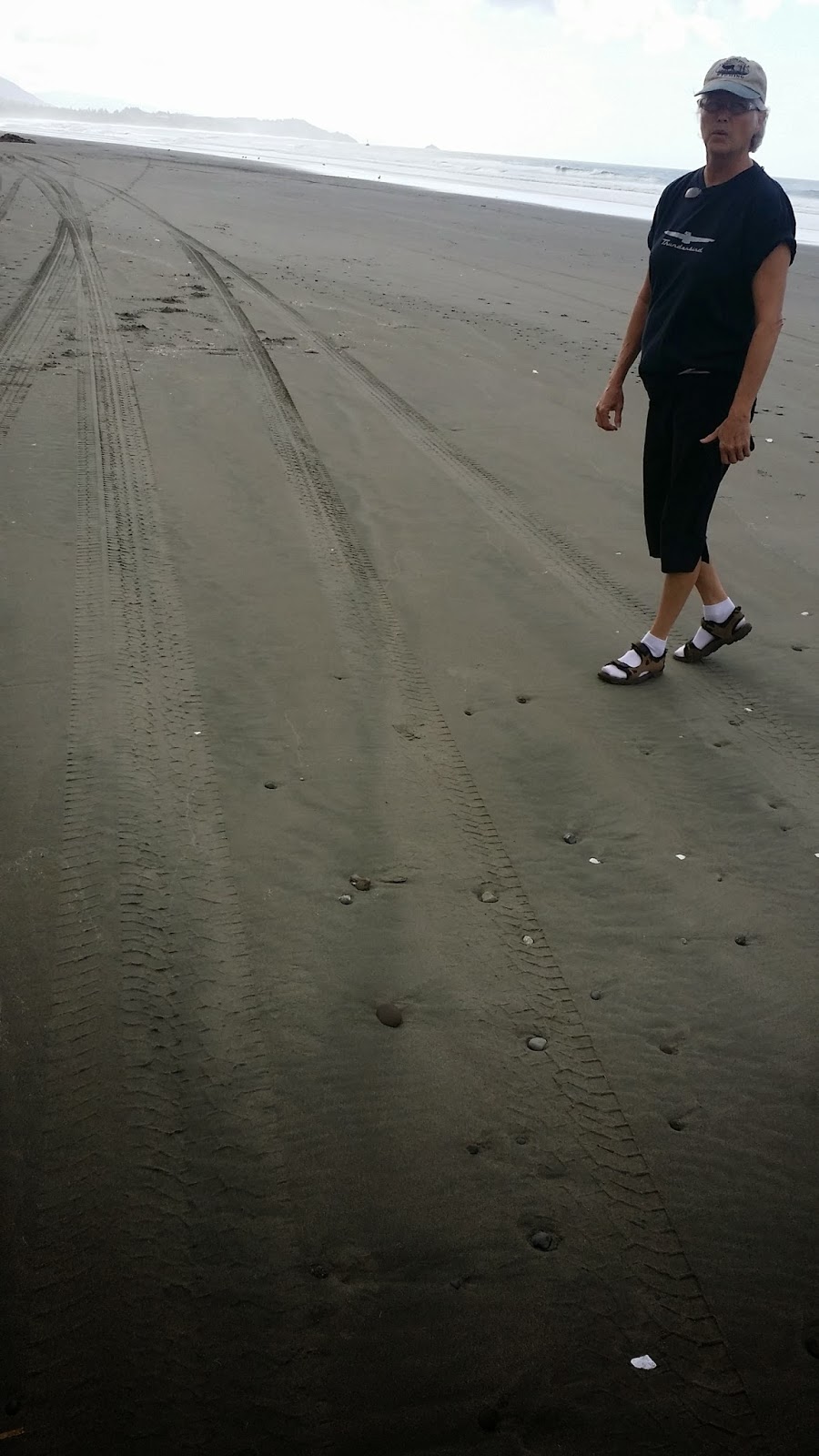 Along the way we found this jellyfish that had become beached as the tide rolled out.... 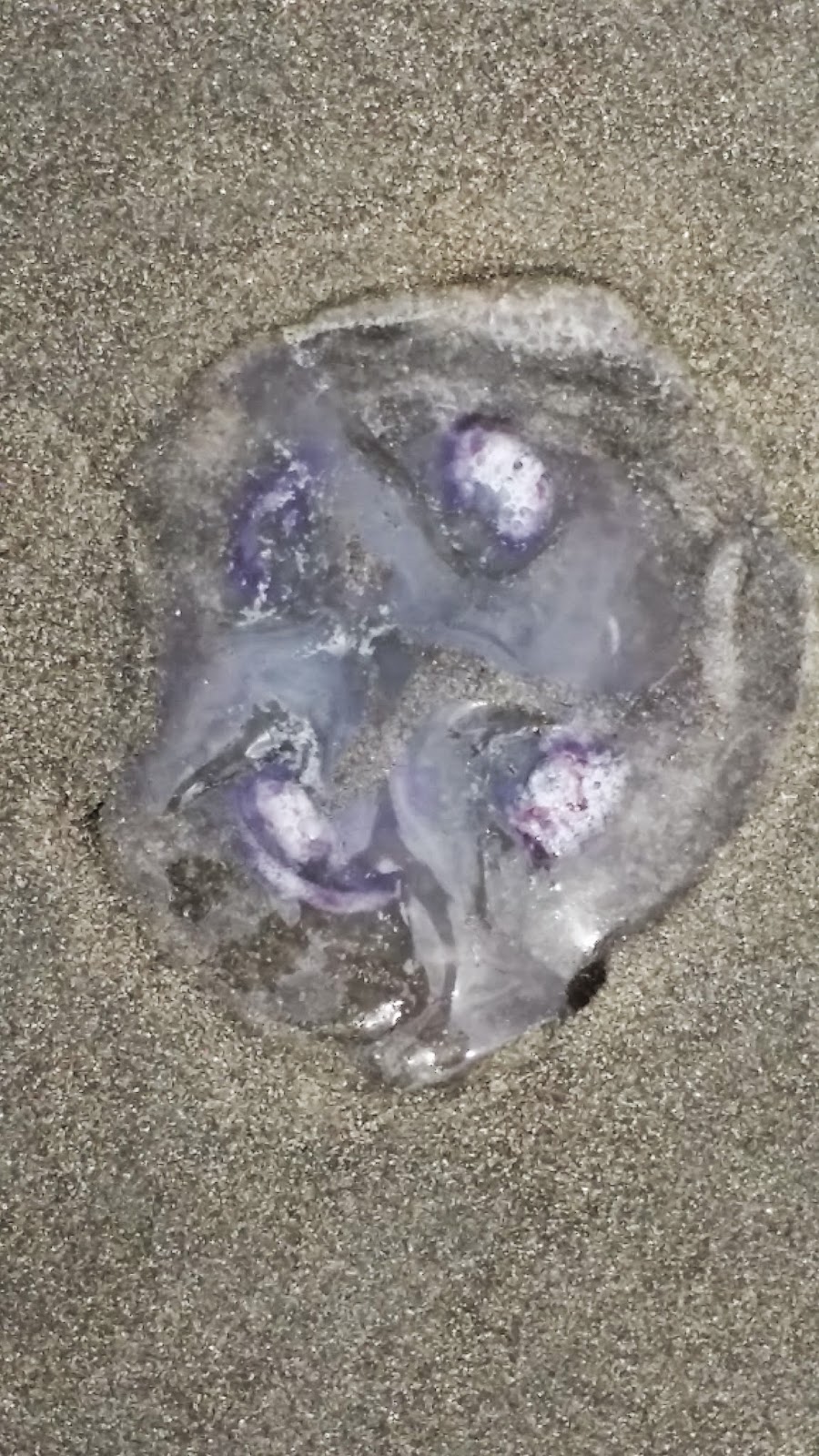 The walk ended up being around 3 miles round trip, and by the time we returned Chris and Cherie had moved their GM bus conversion to another site, so it was time to move! 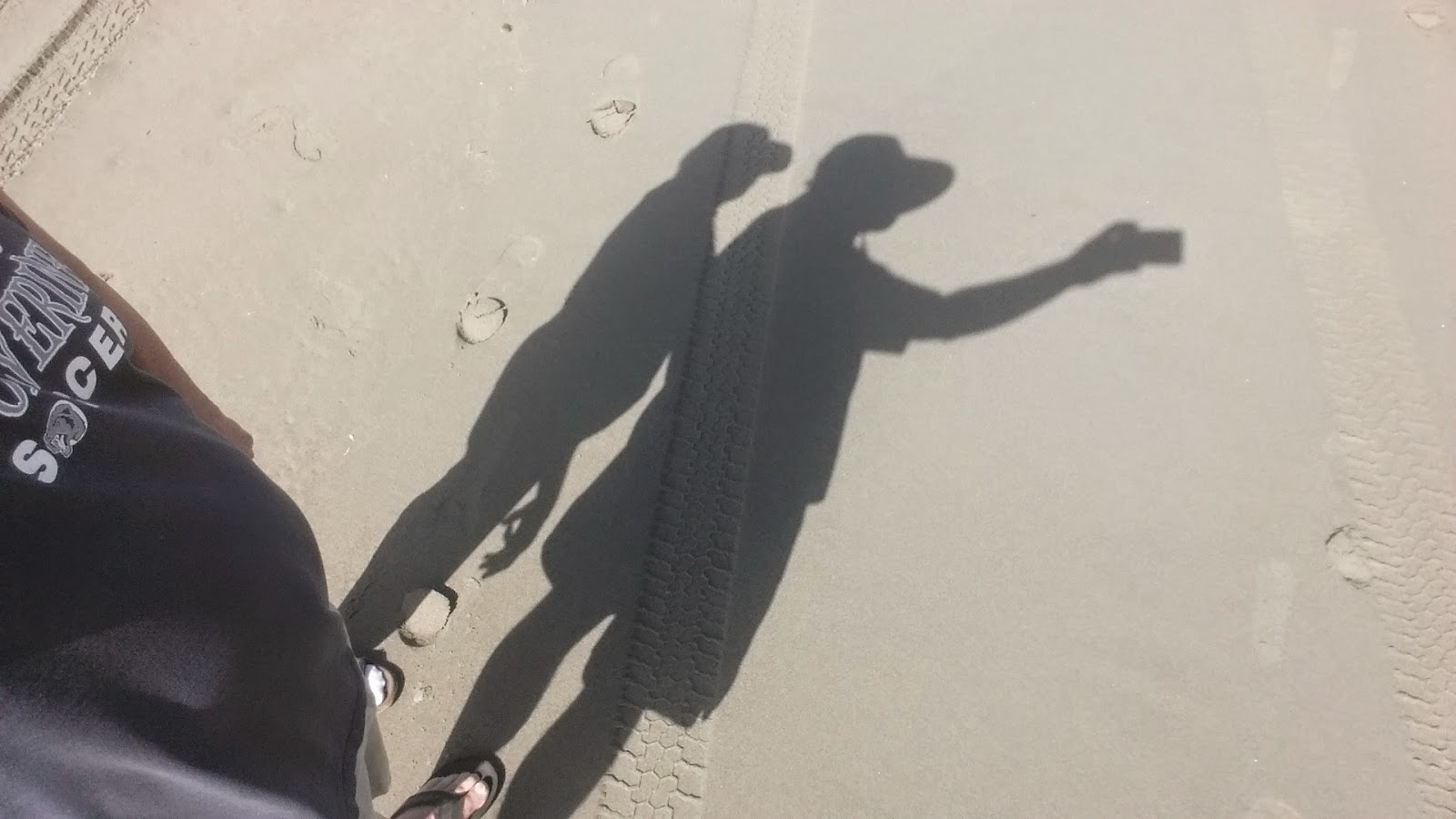 Just as I was unhooking the electric and water Krash and Karen arrived to watch us move.  It took about 10 minutes to get into the new site, and I am already liking it.  Our other site was in the shadows much of the day, and often I felt like we were living under a bridge.  Since we got so little sun in our site each day things rarely completely dried out....I'm much more optimistic about the amount of sun we will get in our new site. 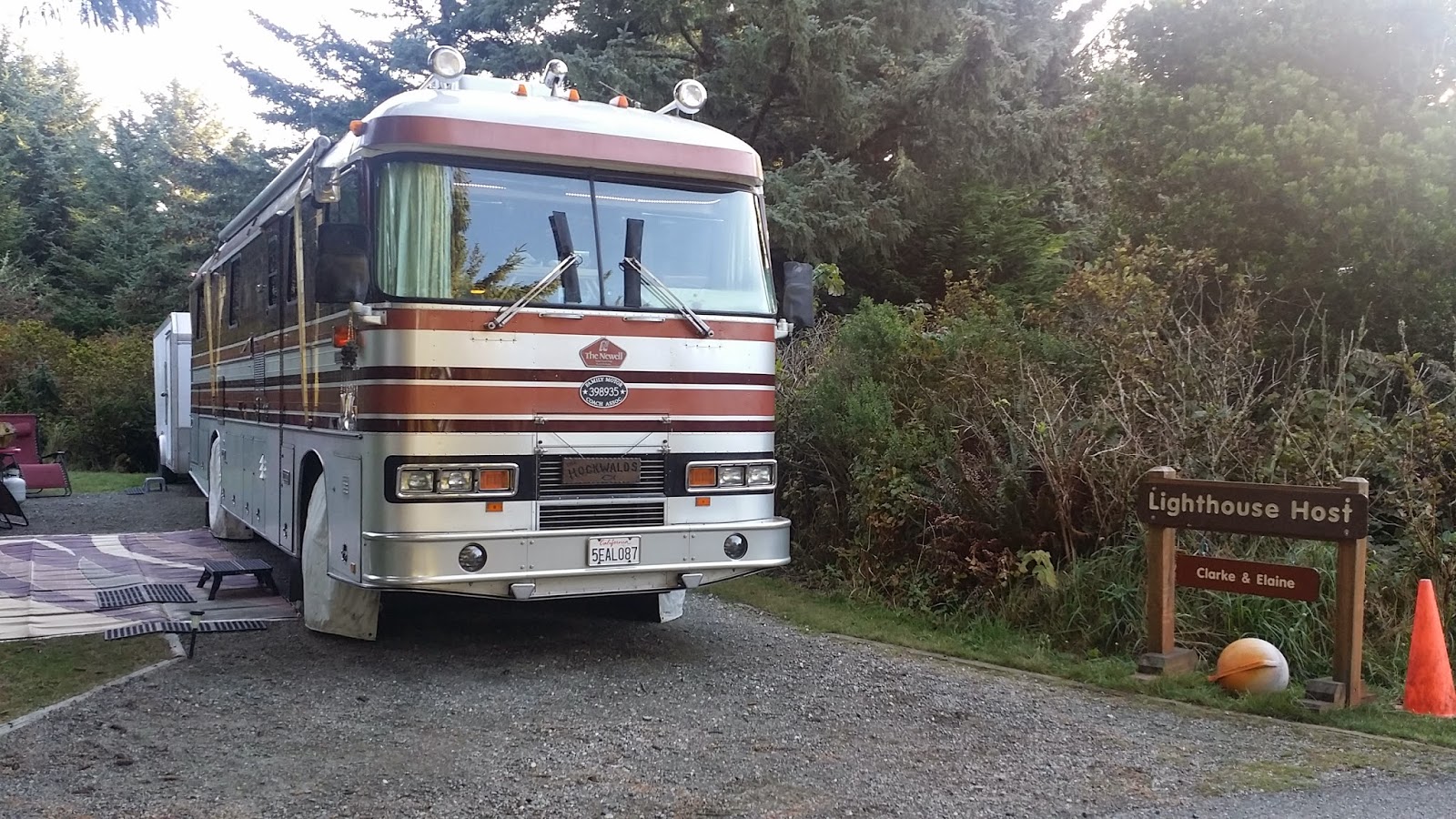 Just as we were finishing getting things hooked up, and all our "stuff" set out again Brian and Judy arrived in their 41' fifth wheel for their one month stint here at Cape Blanco.  They ended up choosing our old site.....it took them a while to get their RV into the site, but within the hour they were set up and relaxing. 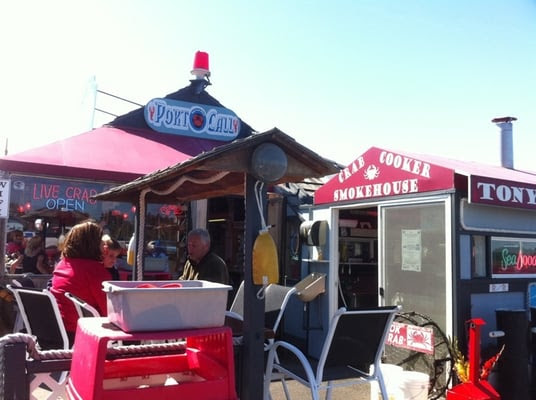 Around 5 pm Krash and Karen returned and we drove into Bandon with them to have dinner at Tony's Crab Shack.  Yelp gives them a solid 4 stars on 134 reviews, and we would have to agree.  We went there, primarily for their fish tacos (Krash, Karen and I had them), but TLE chose the Smoked Salmon Alfredo.  The food certainly lived up to its billing, and we were able to sit out side talking for over an hour before it was time to head back south to the Cape.

Tuesday was a great day when everything fell into place......Wednesday is lighthouse host orientation, and then Thursday we begin our new schedule for October.

Thanks for stopping by!
Posted by Whatsnewell at 9:46 AM