At 0800 the skies had not yet cleared, and it looked as if the rain we had all night would continue, but within 30 minutes we began to see blue skies once again and the postdiluvian phase of our stay at Rockhouse had begun..... 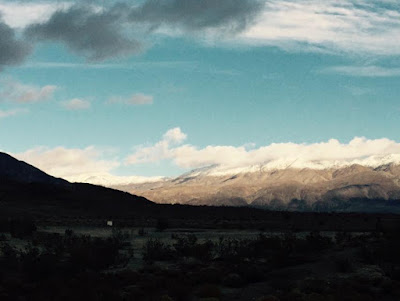 .....as the clouds parted we could see the snow level had lowered overnight, but still far above our elevation.  I deployed our awnings once again, mostly to get them dried out from the soaking they had received the past 3 days, and puttered around camp for an hour, or so.  We had no real plans for the day as the weather guessers were all over the map as to what we should expect, but by 1100 it was apparent we were in for more sun than rain so Michael, TLE and I decided to take a hike back up to the 'SNAKE' and see where the trail we had followed a few days ago went..... 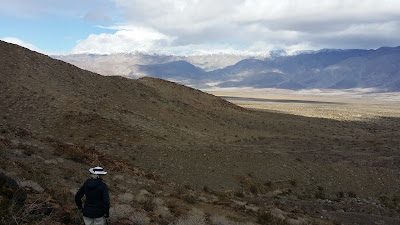 TLE running point for our expedition

....as we gained elevation we were in awe of the view in every direction.....this is one reason we cherish the desert.....the views are big and long.  For me I feel this sense of peace and well being flood over my soul as I my eyes probe the edges of the vast horizon.  When you can look at a horizon and not see any evidence of man's influence it gives you a sense of what the early explorers of this amazing country must have felt as they traveled for days and months at a time without seeing another person, a road, a telegraph pole......just virgin land.

As I snapped this panorama I heard Michael exclaim...."I just love this!"

Just about the time we were intent on continuing along a new section of trail the wind came up....almost as if someone had flipped a switch.......at first it was just a little irritating, but then I remembered I had left the patio awning deployed.  As I turned toward the coach I could see the awning flapping furiously, and decided I needed to head the 1/2 mile back to stow it before damage occurred.  TLE and Michael followed quickly behind.  We got to the awning before any damage occurred, but the now heavy winds buffeting us deterred us from any further exploration until it abated.

TLE made some tomato bisque soup for lunch.....another great soup for a cold, blustery day!  After lunch I headed into Borrego Springs by myself to drop off a Large Flat Rate Priority Mail box at the local USPS......a few of the bike items I had not sold on eBay in my first auction were relisted automatically and sold, much to my surprise.  Thankfully I had them with me and it was just a matter of picking up a box at the USPS, and then packing the items.

After returning from my brief foray into Borrego Springs I headed over to Steve and Linda's Travel Supreme to see if I could help them figure out why their slide would would go out under power, but not retract.  They have been having to manually crank in the bedroom slide since just before New Years.  Regrettably my experience with slideouts is quite limited, and after a couple of hours Steven and I conceded temporary defeat.

We had talked about having a fire as the wind had abated as hoped, but within 40 minutes of our agreement to meet at the fire around 1630 the winds returned with a vengeance and are still sweeping across our encampment as I write this morning. 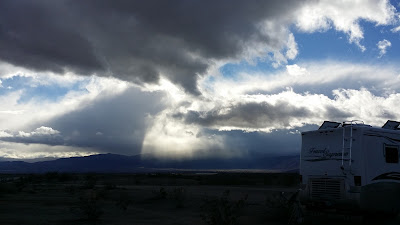 Some rain showers on the horizon (looking toward Julian) 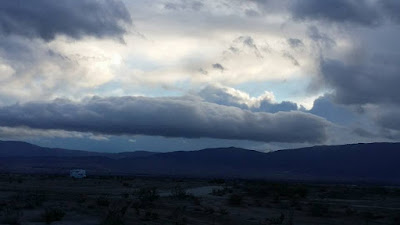 Threatening skies once again, but we had no more rain

With the return of the wind our sunset fire plans were dashed, but there is always hope for Friday evening.  Our forecast looks promising for the next 4 days, and recharging our battery banks should be easy peezy!

TLE and I watched a couple of serials on TV including 'The Blacklist' which has returned after a lengthy hiatus, and once again we were blown away by the script.  We were in bed by 2300 hours listening to the wayward winds as they rocked us to sleep.