We have spent the last 12 days with good nomadic friends Steve and Linda......one thing you need to understand at the very beginning of today's post about happenings on Sunday is Steve and Linda are ardent Seattle Seahawks fans.  She and Steve are from Seattle after all, and when they park their Travel Supreme for a day, a week, or a month the first thing they do is hoist the green and silver flags of the Seahawks...... 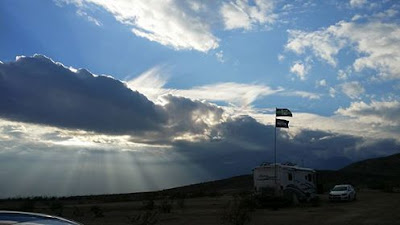 Mostly sunny with a chance of Seahawks....... 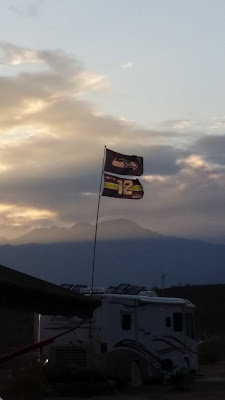 ......each day when I open the front curtains the I am greeted with the sight of their Seahawks flags fluttering in the early morning breeze.

Sunday was the second day of 'wild card' weekend, and the Seahawks vs. Vikings was the first game up at 1005 hours......it was a little cool outside to watch the outdoor TV, so we each watched most of the game in our own coaches.  The temperature in Minneapolis at game time was -6 degrees.....the third coldest NFL game ever played.....and both teams played accordingly......it was 3-0 Vikings at half time, and 9-0 entering the 4th quarter.  Things looked bad for the Seahawks to say the least.......all of a sudden, within a few minutes of game time the 'Hawks scored 10 points, and that is how the game ended....10-9 in favor of the Seahawks.  It took a last second missed field goal attempt (wide left) by the Vikings to seal the deal for them, but they miraculously came out on top.  Just after the Viking place kicker had missed the game winning field goal I ran over to Steve and Linda's coach to exchange 'high fives' and hugs......the relief we each felt was palpable!  The afternoon game between the Packers and Redskins was close at half time, but the Packers pulled away in the second half to win by 17 points.

The second game ended just at sundown, and during commercials leading up to the end of the game I had been getting kindling chopped, and wood into the outdoor fireplace for our second to last sunset fire here in the Borrego Springs Desert.....we were all outside by the fire a little after 1700 hours and spent a couple hours talking and making travel plans for the next 10 days before heading inside for the night.

I have to say that I am really enjoying our small nomadic convergence in the SoCal desert.....you never know how a disparate group of people will come together, but we have blended nicely, and are looking forward to another 8-10 days together before we head our separate ways once again.

TLE and I spent a few hours watching a few recorded programs which had begun to pile up in our DVR queue, and were in bed by 2200 hours dreaming of adventures yet to come.

P.S. - I have been working on a special post recapping our 2015 travels, and it should be published sometime later today.
Posted by Whatsnewell at 8:24 AM