Originally we had planned to stay at Ocotillo until Monday giving all the weekend revelers a chance to leave the scene, and making it easier for us to visit the local ARCO station to dump our tanks before heading 17 miles up the hill to Borrego Springs.  The problem with that logical thinking was that rain was forecast for Monday, and there is not much I hate more than having to pack up and move in the rain.  So all good 'A' plans deserve a 'B' plan just in case, and our 'B' plan was to depart mid morning Sunday.....the mid morning part was us hoping that waiting a few hours would ensure a shorter line at the dump stations at the ARCO.....this ARCO, by the way, has 6 dump stations which are free to the public along with fresh water fill up. 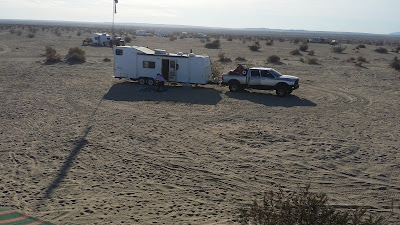 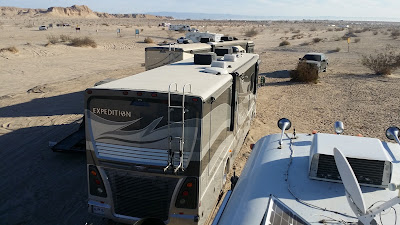 .....everything was put away and all that remained was for us to fire up our diesels and roll our wheels.......and so we did....it was a short 2.5 miles back to the ARCO where we found each dump station line 5-6 RV's deep.  I decided to go ahead and add 30 gallons of diesel to bring my tank level back to 1/2, and then got in line.  The great thing about having your home with ou is you can keep busy while you wait in line.....I chose to eat breakfast while I waited. 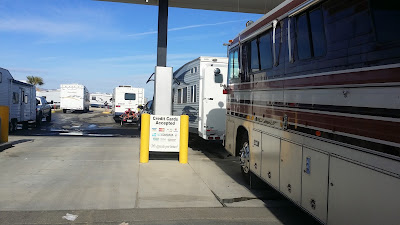 Steven and Linda had moved up to our future boondocking site near Borrego Springs (one meaning of Borrego in Spanish is 'yearling lamb' I understand.....another is simpleton) on Saturday, and that worked out well as they were able to hold two spots near them for the rest of us.  We were out of the ARCO station by 1115.....yeah, just about 2 hours to get fuel, dump and top off our fresh water tanks.....for Michael it was fuel, propane, dump and water.   We arrived at our new boondocking site which is about 8 miles from the little hamlet of Borrego Springs which sits smack dab in the middle of the Anza-Borrego Desert. 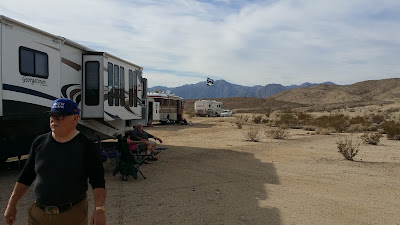 All three of us decided to park facing due west......Steve, Linda, TLE and I because we have solar panels, plus we wanted a view of the local mountains and the shade that comes with that view.  Michael and Liz don't have solar yet, but they chose the same orientation for the last two reasons.  Within a an hour we were mostly set up for our 9 day stay here. 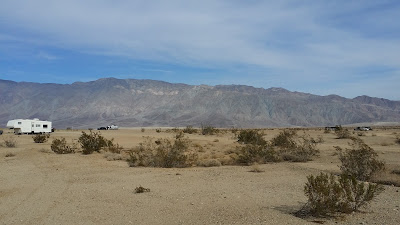 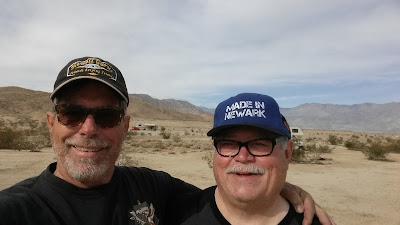 Of course, being Sunday it was also the final weekend of the regular NFL season.....Linda and Steve are big Seattle Seahawk fans (being from Seattle), so we got out the outdoor TV, gathered our chairs around, and watched football all afternoon while soaking in the Borrego vibe, which is a totally different vibe than Ocotillo.  Ultimately the Seahawks won their game over the Cardinals 36-6, so the network switched to another game we had no interest in.....I switched the channel over to CBS to watch the end of the Bronco vs. Chargers game.......Peyton Manning was inserted in the second half of the game with the Broncos down....this is the first game he has played in 7 weeks due to an injury.  He brought them from behind to win the game.

We immediately convened to the outdoor fireplace for our first Borrego fire, and spent the better part of 4 hours around the fire enjoying the evening, and the ever thickening cloud cover.....a harbinger of the forecast rain....... 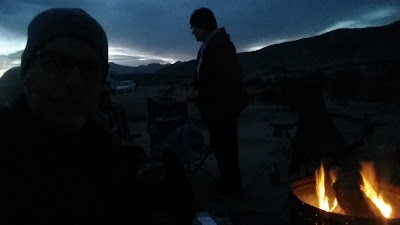 .....it was a lovely first evening together and just how I saw my day ending......life is good!