The reason we are at the Big 'Q'

By the way, when we crossed into Arizona a few days ago we lost an hour.....as you will remember Arizona does not participate in the foolishness that is called 'Daylight Savings Time', but of course, that means the sun does not rise now until almost 0800, which has thrown my sleep pattern off a tad and has me finishing my blog each day close to 0930, or later sometimes!

Around 1000 hours, shortly after finishing my daily blog entry, TLE and I got dressed and headed for the BIG WHITE tent to see if we could find anything we could not live without.  Steven and Linda stayed behind as they were awaiting the late morning arrival of a mobile RV tech guy to look at their slide mechanism.......it will deploy, but not retract.  Mike and Liz followed us in their car as neither of us knew how long we would be at the BIG WHITE tent.  My main focus was to find an RV flag pole, which I have wanted for a few years, and within a short time I found my pole.....a 16' fiberglass telescoping pole that could be mounted to the front of my trailer......most of them are made to clamp on your ladder, but I don't have a ladder, and I do not want to drill holes in the Newell.....plus, plus....mounting it on the trailer will isolate us from any vibration the flags may cause while flapping in the wind, which gets transferred down to pole and into your RV if you have mounted it to your ladder, or if you have flush mounted it to the side, or rear of your RV. 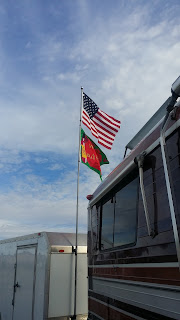 As it turned out, Mike and Liz had large shopping list, and stayed much longer than we did.....we were home by 1230, and they returned closer to 1400 with a new awning mat, and a few other things.  The BIG WHITE tent was cram packed with like minded folks, and walking was very slow.  The main parking lot was full by the time we arrived, and we ended parking about 5 minutes away in what they call the 'WASH'.....we plan to return again Sunday and Monday to finish checking out all the vendors along Dome Rock Road, and there are hundreds......literally.

We watched most of the first afternoon NFL playoff game between the Kansas City Chiefs and the New England Patriots which was won, predictably, by the Patriots 27-20.  The second game between the Green Bay Packers and Arizona Cardinals was a very good game which went to overtime, and was ultimately won by the Cardinals 26-20.  Greenbay came from behind in regulation to tie the game 20 all on another 'Hail Mary' pass by Aaron Rogers with no time left on the clock. 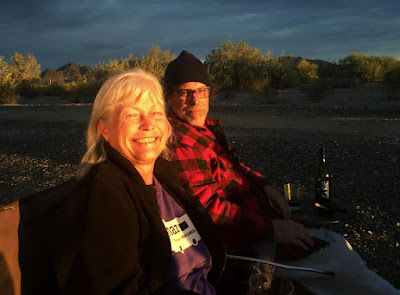 At precisely 1630 we all convened for our nightly sunset fire (when there is no wind) and chatted for about 90 minutes as the sun slid toward the western horizon once again..... 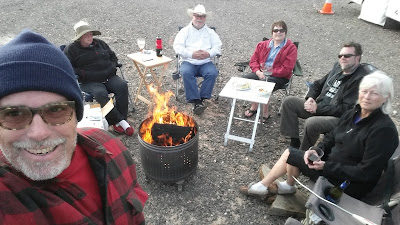 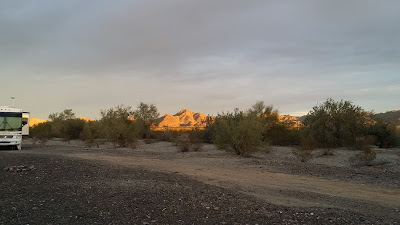 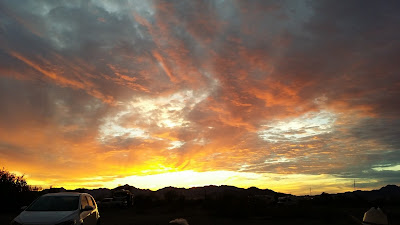 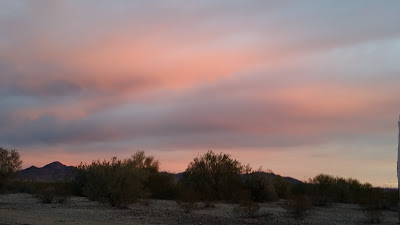 It was another good day of boondocking....oh, by the way, the problem with Steve and Linda's slide is one of the 'controllers' (the one that pulls the slide in) has gone bad, so it's an easy fix.  The RV tech guy will return early next week to install the new one, or Steve may acquire one and do it himself....either way it is an easy fix, and that is the important thing!

On a final note, the Verizon broadband here is Quartzite is phenomenal!  We get 4-5 bars of quite fast LTE all the time, in spite of the hoards of people all around us sucking up bandwidth as if the zombie apocalypse begins in an hour.

Thanks for stopping by!
Posted by Whatsnewell at 7:38 AM