Our 8th day at Quartzite began like all the others......slightly overcast with temps in the low 40's.  My plans for the day were modest, which is another way of saying I had no plans.  There was a possibility I might drive over to Chris and Cherie's to show them how to fix a bicycle tire flat, but that did not materialize.  I was thinking about driving over to the BIG WHITE tent to see if any of the prices on things we were interested in had dropped, and maybe pick up some fire wood, but then I got a call from a fellow Newell owner, Russ Davis, asking if we were interested in meeting he and his wife Debby for lunch at Silly Al's Pizza (Yelp gives them 4 stars on 101 reviews).....we have been trying to hook up since we are both at Quartzite, although separated by several miles, but the stars had not yet aligned.  I agreed to meet he and his wife Debby at 1230.  As it turned out TLE opted to stay off her foot (broken toe) since she had walked several miles around Los Algodones the day before.

It is not quite as crowded around the 'Q' as the RV show is beginning to wind down (the last day is Sunday), but there was still a lot of traffic as I made my way over to Silly Al's.....the parking lot was packed when I arrived, and still packed when we left two hours later.  I had a delightful 2 hour lunch with Russ and Debby talking about the fulltime lifestyle, our Newells, family, etc., and the time just seemed to melt away.  Although Silly Al's specialty is pizza, due to the SRO conditions it was a 45 minute wait for a pizza, so I opted for their Hot Pastrami which was quite good (chased with  a Shock Top).

Since they had not had a chance to meet TLE I suggested they follow me back to our coach to meet her, and take the 10 cent tour of our Newell.  We talked for another hour, but around 1530 they bid their adieus....we will try to make a run over to see their 1986 Newell on Friday after we get our new windshields installed.

Shortly after Russ and Debby left (I forgot to take pictures) Mike and Liz returned from picking up their 'new' Winegard Carryout satellite dish and asked if I could help them set it up since we have the same one.  Within 30 minutes we had everything hooked up, and a few minutes later they were watching DirecTV.

We agreed to meet for our 8th Quartzite sunset (accompanied by a fire) at 1740.....we only had one box of wood left, so I figured we could stretch the fire for at least an hour, but the wood burned slowly and was still smoldering when we headed back inside just before 2000 hours.  We had a lovely time listening to Liz regale us with stories of Hoboken, NJ, where she grew up...... 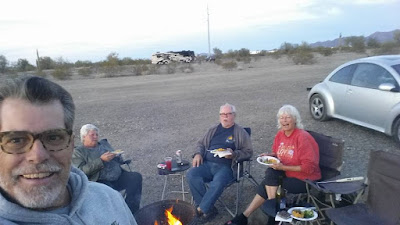 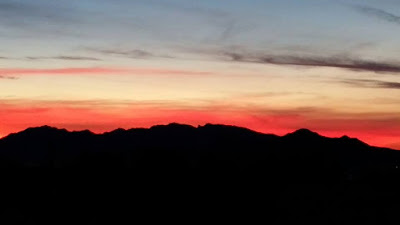 .....we managed to burn the last of the cardboard from the boxes holding the wood, and now after over 3 weeks we have finally burned all the firewood we had accumulated, and had been hauling around from Riverside to Ocotillo to Borrego to Quartzite..... 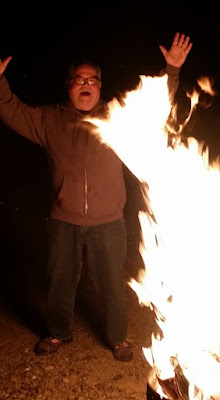 The last cardboard box goes up in flames

.....TLE and I watched this weeks 'Blacklist' episode, and were in bed by 2300 hours.....for those interested in our battery situation we managed to get back to 98% (started at 84%) by sundown......there was just too much overcast to get fully charged, but 98% is pretty good considering how overcast it was.

Thanks for stopping by!
Posted by Whatsnewell at 7:44 AM