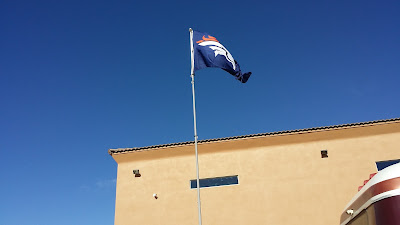 Sunday was championship Sunday in the NFL......if you have read my blog for a while you know I'm a Denver Broncos fan, and on this Sunday the New England Patriots were playing the Broncos in Denver for the AFC championship.  Denver, as has been the case for most of the season, was the 'underdog'.  Broncos are, by definition, wild, untrained horses, and Sunday the Broncos' defense looked like a bunch of wild horses as they ran at Tom Brady (Patriot quarterback)  from every direction knocking him to the ground some 23 times.....an NFL record.  Ultimately the game came down to a missed extra point by the Patriot place kicker on their first touchdown, leaving them down by 8 points before they scored their final touchdown with seconds remaining in the game necessitating they go for a 2 point conversion to tie the game, which is much harder than a 1 point conversion.  The Denver defense was able to bat the game tying pass away and break up the attempt to tie the game, and thereby winning the game.

For me this was the game of the day, and I'm glad it was the first game of the day.....the second game pitting the Arizona Cardinals verses the Carolina Panthers for the NFC championship game in Charlotte, North Carolina.  I expected this game to be a close game, but in the end the Panthers were just too much for the Cardinals forcing 7 turnovers and whipping them 49-15.....it was over early in the 3rd quarter.  So, now we have Super Bowl 50's matchups.  The game will be played in Santa Clara, CA at the home stadium of the San Francisco 49'ers on February 7th.......and I will be there front row center watching the game!

I know.....enough football, right?  What did we do the rest of the day?  Well, I spent part of the morning deploying our patio awning, putting down our awning mat, deploying our new outdoor LED solar lights, having TLE back the VW out of the trailer, raising the Brocos' plag on my new flag pole, and then cleaning the sand out of the trailer after 3+ weeks in the desert.

Around 1100 TLE and I drove over to the Wittmann Flea Market where I rarely ever leave without finding at least one thing I cannot live without, and Sunday was no exception..... 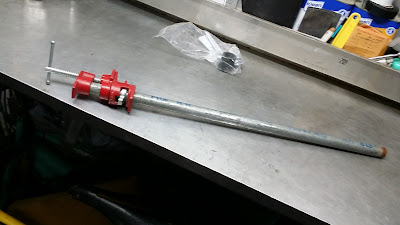 ......there are times when I wish I had a clamp with greater reach than my "C" clamps and Sunday I found that clamp for a very good price at $4.  We were back home by 1200 hours getting ready to watch the Broncos vs. Patriots game, and beginning at 1300 were both glued to the TV watching the game.

Laura, Tom and Darlene's daughter, and her husband Jon invited us over to their home to watch the Cardinals vs. Panthers game and for dinner.  Laura prepared Tri-tip and shrimp with several sides which were all delicious......unfortunately the football game did not live up to the quality of the food.

Posted by Whatsnewell at 6:22 AM