Each morning when I sit down in front of my laptop to type my blog I move the cursor to the 'title' box, click and then watch it pulsate as it waits for me to type something meaningful.....sometimes it sits there blinking for a number of minutes while I think of what title I should bestow on that day's individual entry......sometimes I do not come up with a title until after I have finished that day's entry....this morning the word 'sublime' (of such excellence, grandeur, or beauty as to inspire great admiration or awe) came to mind immediately when thinking not only about our sunset fire Thursday night, but the past 16 days spent with our nomadic friends.  Last night our convergence increased by 1/3 with the addition of Bill and Jodee.....they became nomads in June of 2015. 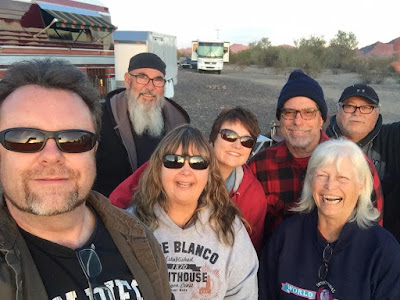 For me 'sublime' perfectly describes my personal experience getting to know each of these people on a deeper level.  We all come from such diverse backgrounds with completely different life experiences and world views, but here in the desert we mesh perfectly.....I feel as if I have known them all my life........ 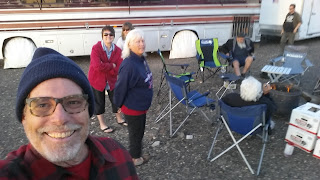 ......why is that?  It was a phenomenon I first noticed on our brief stop over in Cedar Key in March of 2012.  We had never met any of the people converging there before, but were immediately accepted and integrated into their group......a group made of of people in their 20's, 30's, 40's, 50's and 60's (us).  In this group age differences were not an issue.....that we all aspired to live our lives freely as nomads......spending a significant amount of time outdoors meeting our neighbors........experiencing nature......cherishing sunrises and sunsets.......not tied down to stuff, or a sticks and bricks home.......loving that we could change our view without going through escrow.......those were the connections that instantly bound us together.  Many of these folks we met that March were younger than many of our children, and yet we thought of them as peers, as equals. 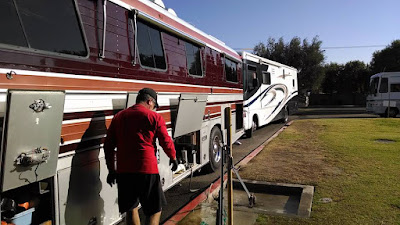 Where did that line come from?

Okay, now what happened Thursday that was so sublime?   We had a target departure time of 1000 hours Thursday from the Indio Elks Lodge, and at 0900 I was moving my coach over to the dump station to, of course, dump, and then drop my trailer back on the receiver hitch.  Apparently many other folks not in our small group had the same thought and the dump station went from empty to have a line of 5-6 coaches waiting to also dump.  As with all Jello plans our changed and we just adapted.....our small convoy pulled out on to Madison at just 1047, and by 1100 we were all merging on to I-10 eastbound for Quartzite.

We arrived in Quartzite at exit 19 (Riggles Road) and headed south to Dome Rock Road to find a spot to park our rigs and then drive in our cars out into the desert to find a home for the next week, or so.....by 1500 hours we had found our spots and then began the process of setting up our encampment....... 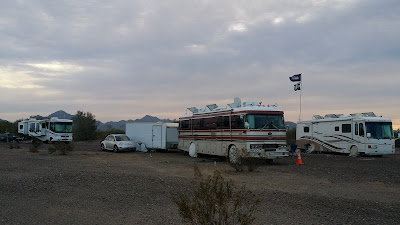 The close up shot of our encampment 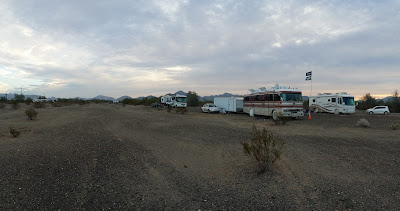 The 'pano' shot....a lot of space between us and our neighbors!

We gathered by the outdoor fireplace for a fire and potluck dinner.....once again Steven and Linda's amazing tri-tip was the star with complimenting roasted vegetables by TLE, and Rosemary potatoes courtesy of Liz......we ate, laughed, talked until 2000 hours before heading inside for the night. 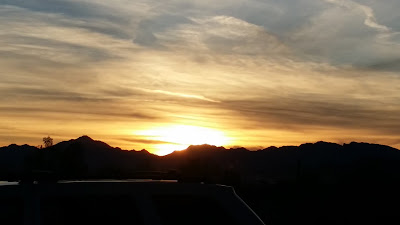 And so our first day in Quartzite came sublimely to an end.........thanks for stopping by!
Posted by Whatsnewell at 8:22 AM