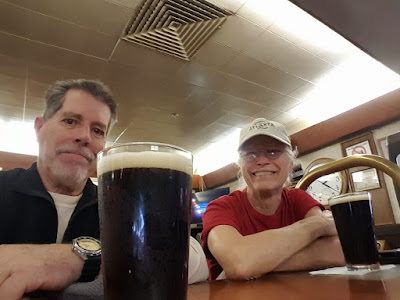 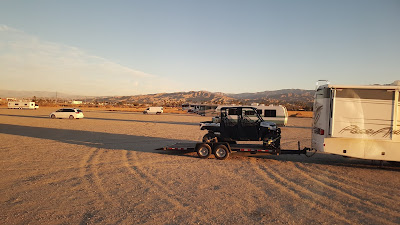 I began Monday with a sort of cloud over my head.  I didn't write about this yesterday as I was still trying to work out what had happened.  About 60 miles after leaving Wittmann the alternator stopped pouring electrons into our batteries, and my tachometer started jumping around like a water bug.  My mind always goes to dark places initially when things go wrong, and I began to believe I may have installed the alternator incorrectly by not engaging the gears correctly, and maybe, just maybe they had ground themselves into a pile of metal shavings.  This, of course is the worst, worst case scenario, and the worst, worst case scenario rarely, and I mean rarely, happens, but I go there anyway.  I did not sleep well Sunday night, tossing and turning as I worked through all the possible reasons why the alternator was not doing its job.  I awoke Sunday still not really knowing the 'why'.
TLE wanted to arrive at the Quechan Border Parking lot by 9 am so she could visit Best Optical before our dental appointment at 11 am, and order some new eye glasses.  As a result we left Foothills Village around 8 am so we could stop off at the local ARCO fuel station to pay the rent (take on diesel).  We arrived at the ARCO around 8:20 am, and were back on the road about 25 minutes later after taking on 117 gallon of #2 diesel at $2.759 per gallon.  We do not want to take on fuel in California as diesel is a full dollar more, if not a $1.20 more per gallon.  We have covered 978 miles since fueling up in Sparks, NV which means we averaged 8.3 miles per gallon....a new record for us!  Of course the tailwind we had most of the drive south accounts for a lot of that increase, for sure.
We arrived at the border parking lot around 9:05 am, paid our $12 parking charge, and were quickly on our way walking across the border into Los Algodones where we found most people wearing masks, but not all.  As we approached Best Optical we began to realize the sign had been removed from the building, and that they were no longer in business....DOH!  We've been buying our prescription glasses from them for the past 5 years, and TLE did not want to try another, so we walked over to our favorite little mall to get some coffee, and kill an hour before walking the final two blocks to Dr. Urena's office........ 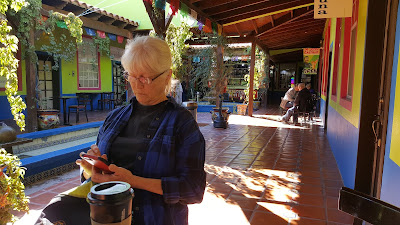 We love this place! 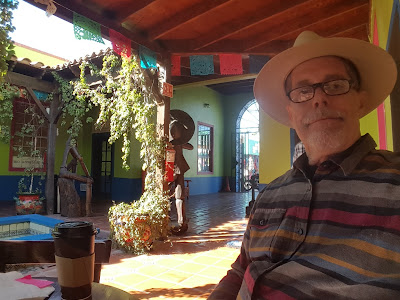 .....we decided to walk the final two blocks to Dr. Urena's office at 10:30 am just in case they could get us in early.  Due to the Wuhan Flu the border closes each day at 2 pm, so we needed to be in line to recross the border no later than 1 pm.  As it turned out they were able to get us in early, and by 12:40 pm we were finished, and on our way walking back to the border.  We got in line about 10 minutes to noon, and were through customs by 1:15 pm, in spite of a very long line.
I had not spoken to TLE about the alternator problem at this point, so on our way back to the Newell I filled her in on the problem, and what I planned to do.  I needed to remove the alternator to see if I had installed it incorrectly.  We were back at the Newell by 1:30 pm where I changed into some work clothes and began to remove the Leece-Neville alternator from its cradle.  As I pulled it out I saw that I had done nothing wrong.....everything was intact, as it should be.  I could hear an audible sigh of relief escape my lungs.  Now to determine what was wrong.  I gave TLE the good news, and asked her to come out and help me reinstall the alternator by helping me get the first bolt in, which I was able to do in pretty short order.  I reattached all the wires, including the tachometer wires, and then started up the big Detroit Diesel 6v92.....still no power coming out of the alternator. I then put the multi meter on it to confirm zero volts were flowing into our batteries.....DOH!
This is when the light went on in my mind......since the positive cable goes directly to the battery bank I should have been getting some reading, even if it was just from the batteries.  Then it occurred to me that there are two 90 amp breakers in the rear main electrical panel......one for the batteries, and second for the alternator.  I opened up the door to the panel and pressed the battery breaker, but it was okay.  I then pressed hard on the alternator breaker, and what do you know?  I heard an audible 'click ' meaning I had successfully reset it.  That was the problem.....for some reason it had tripped on Sunday.  Once it was reset, the alternator began working, and my tachometer began working properly again.  Yay for our team!!!  I ran to the entry door to the Newell, and yelled to TLE that our problem was fixed.....whew!  Below you can see the two 90 amp breakers....it was the alternator breaker which was preventing electrons from flowing to our batteries....... 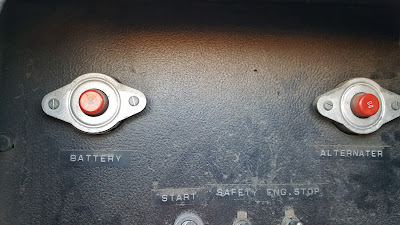 ......before solving this problem we were faced with possibly having to return to Phoenix to get the alternator fixed, and then having to rearrange our reservations in Riverside, as well as at the Santa Barbara Elks Lodge, but now we were free to continue northward to our original destination for the day.....Fantasy Springs Casino in Indio, CA.  We quickly buttoned up everything once  again, and began the 136 mile trek to Indio around 3:30 pm, arriving at the casino around 5:10 pm.  The elevation here at the casino is exactly sea level..... 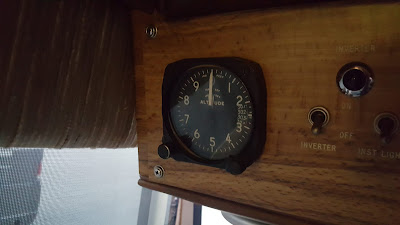 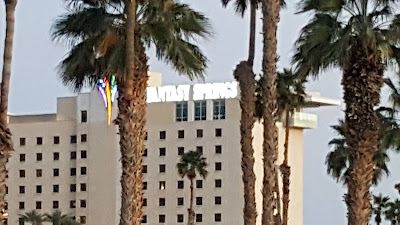 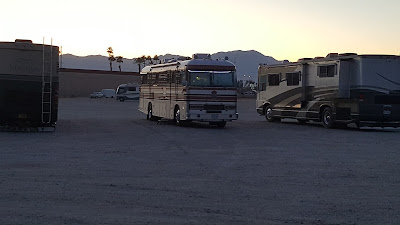 Our parking spot for the night 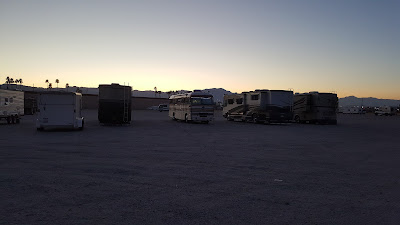 ....we quickly leveled the Newell, and settled in for the night knowing everything is once again working as it should.....what a relief!  I took a hot shower, and was treated to a dirty martini by TLE upon my exit.  We sat listening to music as the sun set behind the Newell.  The day had a shaky start, but ended in victory!
Thanks for stopping by!
When you shop Amazon, please use our link (below) to access their website.......we will appreciate every purchase you make using our Amazon Affiliate link, and  remember, using our link will not add one penny to your purchase, plus we will receive a small commission which over the course of a year adds up to enough to by a tank of diesel for which we thank you very much!
Posted by Whatsnewell at 7:39 AM