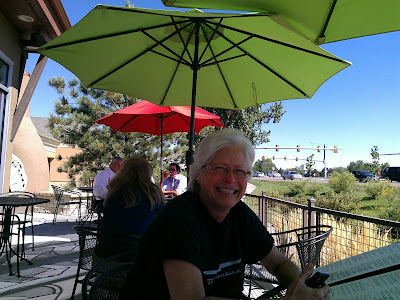 Fred and I returned to the office area again Monday to finish trimming the hedges from the office through site D.  While Fred trimmed the hedges I mowed and string trimmed around the office, park model, and sites C and D.  By the time our two hour shift wound down the trailer was overflowing with hedge clippings.  After dropping yet another load at the dormant 'burn pile' I dropped Fred off at his Class A motorhome, and headed for my own Class A motorhome.
The north wind returned Monday, and by 5 pm it was pretty blustery, but we managed to avoid stowing the awning.  With the return of the cold north wind I opted to remain indoors most of the afternoon, only venturing outside right after I got home to check on a few things in the trailer, and then to close up the trailer late in the day.  I took time to schedule my last haircut at Waldport Family Cuts for Tuesday....it has been almost 7 weeks since my last....far, far too long. Of course, I say that almost every time.
TLE and I continue to be not only asymptomatic to the Wuhan Flu, but have had not so much as a sniffle during our entire stay here on the Oregon Coast.  We are blessed to be far away from population centers where people are being forced to be vaccinated, or lose their jobs.  What have we come to in America?  What has become of the that independent American spirit?  What has become of the national aspiration....."Out of many one".....we are being separated, segregated, if you will, into opposing camps by our government, the lame stream media, and the national elites......we used to protect the minority from the tyranny of the majority, but it has now become fashionable to tyrannize those with whom we do not agree.  I'm reminded of a few C. S. Lewis quotes which uniquely come to bear on our current political and social climate:
"When the whole world is running towards a cliff, he who is running in the opposite direction appears to have lost his mind"
"Of all tyrannies, a tyranny sincerely exercised for the 'good' of its victims may be the most oppressive.  It would be better to live under robber barons than under omnipotent moral busy bodies. The robber barons' cruelty may sometimes sleep, his cupidity may at some point be satiated; but those who torment us for our own good will torment us without end for they do so with the approval of their own conscience."
"The descent to hell is easy and those who begin by worshipping power, soon worship evil."
Just some thoughts which have been coursing through my mind lately....thanks for stopping by!
When you shop Amazon, please use our link (below) to access their website.......we will appreciate every purchase you make using our Amazon Affiliate link, and  remember, using our link will not add one penny to your purchase, plus we will receive a small commission which over the course of a year adds up to enough to by a tank of diesel for which we thank you very much!
Posted by Whatsnewell at 8:33 AM