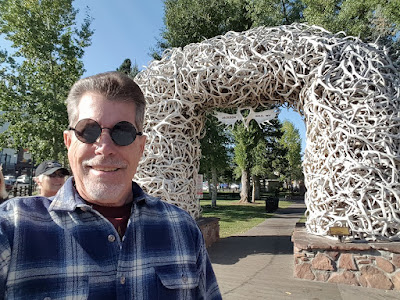 My plans for Sunday were much less ambitious than Friday.....I wanted to get the new sewer vent cap installed, run the Kohler/Perkins propane generator for a while, turn over the big Detroit Diesel 6v92 engine, and pull the wheel covers off the Newell tires to see if my experiment worked.  First up was the sewer vent cap....the old one looked pretty gnarly....

The old tin sewer vent cap...top and bottom.....really rusted out!

I think I over did the silicone seal last time....lol!

I had to use JB Weld to hold the cap together until the new one arrived....without the JB Weld it would have been dust....lol!
.....once I had the old vent cap off I cleaned the surface of the roof, then installed the new PVC vent cap sealing the bottom with outdoor silicone.  The old cap had a 5 screw pattern, while the new one has a 6 screw pattern, so I sealed the old holes with silicone, then used self tapping Phillips head screws to attach the new vent cap........

I believe the PVC material will fair much better against the elements
.....next up I topped off the generator fluids, then fired her up....she started immediately and ran like a top until I shut her down 15 minutes later.  Likewise, the big Detroit Diesel 6v92 fired up and ran for about 15 minutes until it came up to temperature.  It's been 7 weeks since I last ran the Detroit, and during that time we have stayed perfectly level, and only this week the air pressure dropped below 100 psi...that's the best our air system has ever performed while being parked for months at a time.
The final task of the day was to pull the wheel covers, then remove the shrink wrap (front wheels), and card board discs (rear wheels) to see if they had mitigated the salt air intrusion.  The results are mixed.....the wheels on the driver side faired better than the passenger side, but there was salt intrusion, and there will be a little cleanup necessary for them to shine like they did in March when I last polished them.
By the time I finished the last task it was after 4 pm, and time for a shower.  In spite of the offshore clouds we managed to get a sunset shot once again.....

Thanks for stopping by!
When you shop Amazon, please use our link (below) to access their website.......we will appreciate every purchase you make using our Amazon Affiliate link, and  remember, using our link will not add one penny to your purchase, plus we will receive a small commission which over the course of a year adds up to enough to by a tank of diesel for which we thank you very much!
Posted by Whatsnewell at 7:53 AM