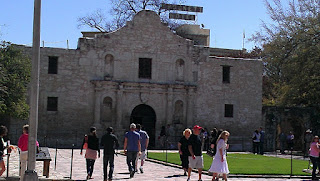 The Alamo, of course!

Our plan for today was to ride our bikes northwest into downtown San Antonio mostly on the Mission Trail bike path, which ultimately turns into the Riverwalk, and downtown San Antonio. Regrettably much of the southern part of the trail is closed for river rehabilitation. The northern portion above Mission Concepcion is open, so we had to detour along a lot marginal residential streets, and by that I mean this was a marginal residential area......very seedy, but showing signs of improvement...a lot of new construction associated with the river rehab project (San Antonio River). We first visited Mission San Jose, which is a pretty impressive structure (reputed to be the most heavily fortified of the 4 missions on the south side of San Antonio), then on north to Mission Concepcion. There are 4 missions not including the Alamo......the two we did not visit today are south of are where we first tried to enter the closed Mission Trail. We will save them for another day. 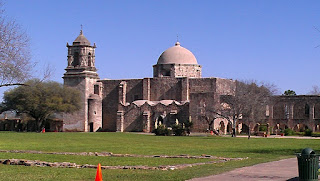 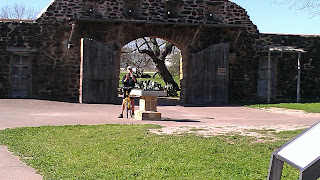 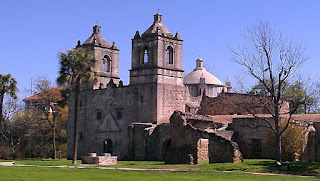 After Mission Concepcion we continued north on the actual Mission Trail bike path until we came to the beginning of the Riverwalk trail where bikes are prohibited. We turned up Alamo Street to stop by the Alamo, then on to the Riverwalk for lunch at Mad Dogs Pub. They serve my favorite draft beer, Newcastle, so I ordered up a couple of pints along with a burger and fries.....hadn't had breakfast so I was hungry! The reason I hadn't had breakfast was we thought we would run across a Starbucks, or some other coffee joint along the way and get a bagel and a cup of joe, but I am sad to say no such establishments were found in the 13 miles we rode into town. I'm pretty sure that is a code violation of some sort, but considering the neighborhood we rode through for much of the morning it isn't too surprising I guess. We didn't spend a lot of time site seeing as we were here in 1984 and saw everything inside and out. This day was mostly for the nice bike ride, and revisiting a few memories. 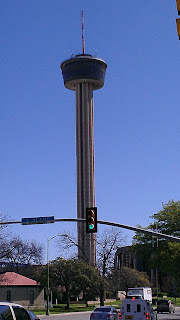 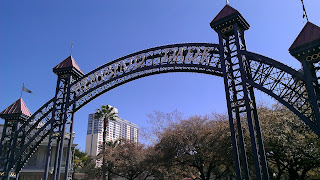 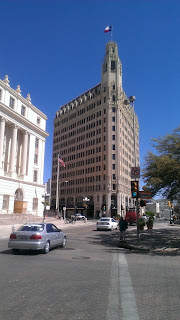 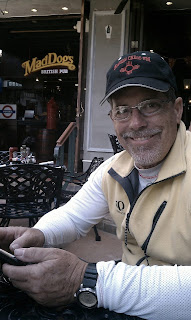 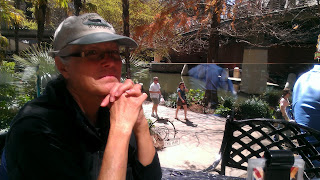 At Mad Dogs Pub - Riverwalk
All in all we rode 26 miles roundtrip.....the last 5 into a moderate headwind, but we had a great ride, and were actually happy we had the bikes as we rode from attraction to attraction. This was the first long ride we've taken since we were in Bullard and rode over to Emerald Bay on Lake Palestine. Hoping this is one of many to come over the next weeks.

Tomorrow we are off to Corpus Christi....brand new uncharted territory for us. We are looking forward to exploring that area, and its environs extensively over the next week. It will be nice to be near the ocean again.

Thanks for stopping by!
Posted by Whatsnewell at 12:39 PM