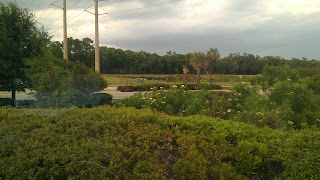 Our view at the Walmart Supercenter in Sanford....

We are now officially on the east coast of the United States. When I think of all we have done and seen the past two months (our two month anniversary was yesterday, March 30th) it seems like it has been much longer than two months. We are now about 3,600 miles into our journey, with thousands of miles to go over the years to come.....how many years you ask....I don't know when we'll get tired of changing our view.....is that even possible?

In reaching the east coast we crossed 8 states taking the southern route, and saw things we have never seen before.....we spent several weeks along the Gulf Coast, which was our goal...we spent 4 days on Padre Island south of Corpus Christi, a couple of days on Galveston Island, Bolivar Peninsula (rode the Galveston Free Ferry), visited the French Quarter in New Orleans, visited Baton Rouge, crossed the mighty Mississippi a couple of times, spent a week deep in Bayou country, went to a Zydeco festival, visited Avery Island (home of Tabasco), spent parts of 3 days in Cedar Key where we went kayaking, and made many new, what we call, Nomad friends.....people who are doing what we are going...changing our view daily, weekly, monthly...when we feel like it, and adhering to no particular schedule, unless we decide it's what we want to do. 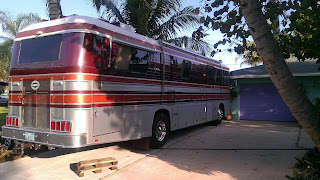 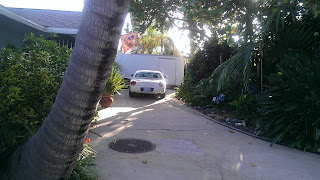 The rest of the rolling stock

I don't know if we will be in Stuart 3 days, 7 days, or 10 days, but I will know when it is time to move again. Right now we are courtesy parked at the home of a long time friend gong back to high school....our paths separated for a few decades, but we reconnected on Facebook, and now we are here sitting his home catching up on 40 years of history. Tomorrow we will go kayaking, and I think Monday, or Tuesday we will take a long bike ride.....we will drive up to Vero Beach, the former home of the Dodgers spring training facility, and up to the Kennedy Space center in Titusville.


Sitting here writing this blog while simultaneously watching the Kansas v. Ohio NCAA final four game.....Kansas pulled out the game after trailing the entire game, and finally taking the lead with around a minute to go.


I guess I should add that our drive across Florida from Cedar Key on SR44/441/46 was very nice....great roads, and low traffic volume. We overnighted at another Walmart Supercenter at about the 140 mile mark leaving 162 today.....a little longer each day than normal, but still easy driving days. The drive south on I-95 was very nice and uneventful....just what I like!

Posted by Whatsnewell at 7:16 PM