It's OK to watch basketball ALL DAY 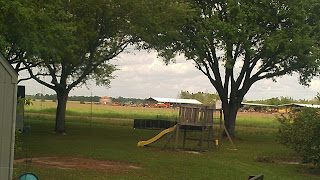 Our view the past few days.....getting ready to change it again.


I always enjoy the first weekend of March Madness NCAA mens basketball.....there are wall to wall games to watch. I watched 5, or 6 games Friday, and then Saturday evening watched probably parts of 8 games, but yesterday, Sunday, the TV was on ALL day and into the night...the last game finished a little after 11pm my time! What a great day of basketball....a couple of upsets, which is what March Madness is all about. Since there are no Pac-12 teams still in the tournament I have spent my time rooting for the underdog schools.....you know, the small schools that never get any attention until they knock off Duke. Anyway, that's how I spent most of my day.
Before basketball started up I got busy washing the last of my rolling stock, the trailer. It is really the easiest to wash, and it always looks so great to see it sparkling white again. It had taken on a dingy gray tone from all the drizzle we drove through out of Padre Island, and Palacios. It only took parts of 3 days to get the coach, 'Bird and trailer clean.
Since I have everything out of the engine bays on both sides of the DD due to the radiator cleaning that went on Saturday I decided to prime, and repaint the metal floor of each, and put in new rubber mats. The original owner had fabricated a wood platform in each, but the wood had rotted out over the years, and it was time to rip it out. The Rustoleum gray primer went on Sunday, and the Rustoleum gloss gray finish coat will go on this morning. Then I'll cut the rubber mats to fit the space. 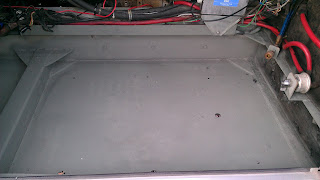 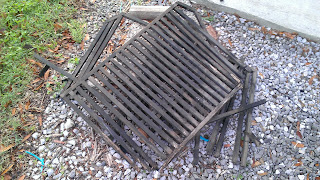 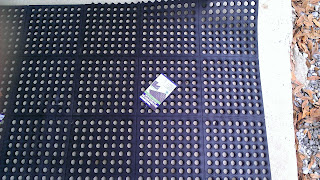 The new rubber mats!
This is one of the nice things about being able to park in one place for 5-7 days....I can work on projects, and get them finished before we move on. When we were in Austin I was able to replace the 110 AC fan behind the refrigerator (helps exhaust the hot air in the "chimney behind the fridge, which helps the fridge stay cold), which I could only use when the inverter was on, or when we were plugged in. I replaced it with a similar size fan, but 12 Volt DC, so now I can run the fan on hot days while on the move, or dry camping without having to turn on the inverter. The old AC fan had to be manually plugged in, but I installed an on/off switch on the new 12 volt fan to make it easier to turn on and off!
Other than the run over to Lowe's to get the Rustoleum and rubber mats we didn't do much, other than watch basketball (OK, Elaine didn't watch basketball, she read), and take a short swim in our host's swimming pool to cool off....it got up to 85...the warmest temps we have had on our trip! Looks like we're in for a few days of rain starting Tuesday and running through Thursday, so we'll stay put until that passes, and then we'll change the view out our front door again....we'll be moving on to Mississippi, and then Alabama.
Today we're heading into the Big Easy for the day, and then up to Baton Rouge tomorrow to do some more site seeing.
Thanks for stoppping by!
Posted by Whatsnewell at 4:57 AM