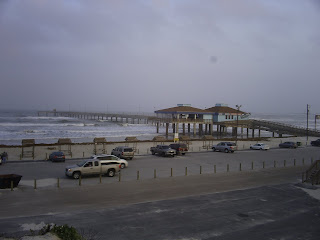 Thursday, March 8, 2012, 07:21 ho
Thursday, March 8, 2012, 8:40 hours:
On our drive down from San Antonio on Tuesday we started hitting a headwind about 50 miles north of Corpus Christi......we were going south, and the wind was blowing directly from the south. When we arrived at the park we are camping at it was very windy, and at times it was difficult to open the coach door. Well, the wind has continued unabated since then at around 20-25mph with maybe an hour with no appreciable wind. The wind was forecast to end Tuesday night, and then Wednesday night, but it it still blowing! So, you might ask, where are we moving today? Right down to the source of the wind...the ocean!
Actually we are moving to Padre Island for a few days. It's supposed to start raining tonight and rain much of the weekend, so that means solar charging will be at a minimum. While we've been able to maintain our house batter bank at about 92% of full capacity, right now we are down to 82% after the night. The cloud cover is very heavy today, and we'll be lucky to put 2% back in without major generator running today. So, it will cost no more to go plug in for a few days until the weather passes, and then we will pass on to a new view out our front window further east along the Gulf Coast.
Once we get set up later this morning down at Padre Balli Park we'll drive over to Port Aransas for lunch. I've heard it is a nice relaxing place to visit. The Spring Break revelers will begin to arrive all along this coastal area later this weekend, so we'll want to be shut of Padre Island before the hoards start to overwhelm us.
Our plan for yesterday was to ride the tandem down to Corpus Christi, but that would have meant riding into a 25mph headwind for a couple of hours, and that is not fun.....no doubt the return trip would have been a blast with that kind of tailwind. I was tempted to try, but the Lovely Elaine did not see the point, and reminded me that we are not on vacation, and not under an artificial schedule to be anywhere, so why not wait until the wind dies down, and just enjoy where we are at.....she is a wise woman, and I am wise to listen to her. Instead I spent the day making a repair to the rack that holds my recumbent tadpole trike on the front the trailer over the tool box, and reading "For Whom the Bell Tolls" by E. Hemingway. I find his development of characters, and descriptions of events, and scenes fascinating. Until a few months ago I had never read a single word written by Hemingway. Last summer while we were in Texas for our college reunion I went to see the Woody Allen movie "Midnight in Paris". To be honest I was not a willing participant, but my wife wanted to go, and so did the rest of the in-laws we were visiting......I haven't liked a Woody Allen movie since Annie Hall back in the 70's, but this movie was very good. Woody Allen's portrayal of Ernest Hemingway in this movie inspired me to begin reading his literary works. I have talked to more than one person who saw the movie and was so inspired. At any rate I have read "The Sun Also Rises", and "Old Man and the Sea", and am now half way through the latest book.
For those who have tuned in late to my blog, I bought myself a Kindle back in the Fall of 2011, and have now read a couple dozen books on it. I really like the idea of having all these books to read, and taking up very little space. I used to carry 30, or 40 paperbacks by my favorite western author (Louis L'Amour), and frankly, that took up a lot of room. That combined with Elaine's stash of books was taking up a lot of valuable space. Now Elaine reads books mostly on her Ipad....she still has a few paperbacks, and I read all my books on my Kindle.
That's it for now.....I'll post more later after we settle into our new view. Thanks for stopping by!Thursday, Mach 8, 2012, 11:40 hours:
Thursday, March 8, 2012, 19:30 hours:
Arrived Padre Bali Park around 13:30 hours this afternoon.....very cloudy, cool, and windy. there is a large row of sand dunes between us and the ocean, which acts as a great wind break. Had a nice fire this evening, and sat outside for 2 hours enjoying the ambiance of this new view out our front door. 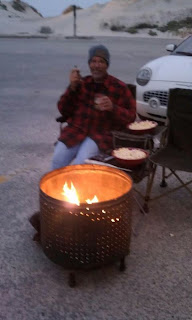 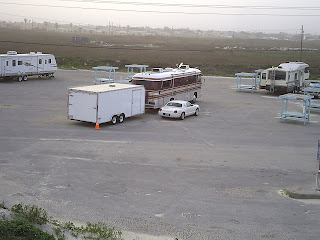 Posted by Whatsnewell at 5:12 AM