The one thing I have been noticing as we have traveled further into the south is how friendly, and laid back people are down here. A great example was today over in Houma....about 15 miles southeast of our current location....I was returning the HUMIDifier we mistakenly bought at Home Depot in Lafayette and asked to see their DEhumidifiers, which they don't carry. The young lady we talked to at Home Depot suggested I visit LMF RV Accessories a couple of blocks over, and guess what? They had exactly what I wanted for $59!

As you will recall I arrived in Thibodaux with a bent tongue jack (I call it landing gear) on my trailer. I emailed our host, who is on his own Newell trip up in Utah, and he gave me the name of a local trailer supply just a few miles from our location. I went in and they had exactly what I needed for $25, so I bought it and installed it in 5 minutes....one of the easiest mechanical fixes I have had so far on this trip. 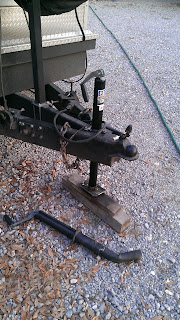 We also stopped off at the local Academy Sports.....kind of like Sports Chalet, or REI, and I bought a couple of new pair of shorts......my current supply has worn down, and is thread bare.

About an hour after we returned "home" a couple of Newell owners who live in this area (Houma and Raceland) stopped by to talk for a couple of hours. Both of these guys are Cajun....I love that accent. At any rate they gave us the names of some good local eateries where we can sample the local fare such as boiled crawfish, and frog legs.....everyone I talk to says I will LOVE frog legs....so we will see. They say they taste just like chicken....so I'm thinking, why not just get some good blackened chicken? We're also going to run up to Baton Rouge tomorrow and do a little site seeing, then Sunday over to Nichols University to listen to some Zydeco bands at the annual Swamp Stomp, and then on Monday we'll drive into New Orleans.

One thing I have to admit is that I am slowly adjusting to the higher humidity levels....I'll never like humidity, but why let it spoil your day, right? I just change shirts more often, and take more showers....by the way, our new DEhumidifier is working wonderfully.....lol!!

Late this afternoon I began the task of washing the road grime off the coach again....after all the hard work in Corpus Christi we drove through two more days of drizzle, and it is worse now than it was on Padre Island. I got up on the roof and brushed and washed off the grime, and salt, and then got the front (a virtual bug annihilation occurred over 3 days) and drivers side done before I called it quits for the day. Tomorrow the passenger side, and back, and then the trailer. I used to pay someone to do this work, and it is hard work, but now that I have a lot of time on my hands I'm happy to do it myself again....it is actually good exercise, although climbing on the roof is not high on my "FUN LIST".

Well, that was our day.....I didn't think I did that much today until I sat down to write about it...haha!

Thanks for stopping by!
Posted by Whatsnewell at 7:39 PM