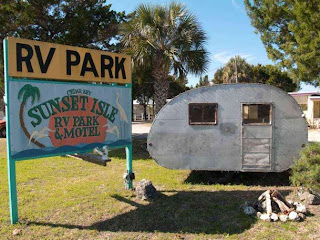 On our walk back from the Tiki Bar Wednesday night Debbie (NU RVers friend) told us that Jeanette (Cheddar Yeti) was going to check on kayak rentals for Thursday, and were we interested....."YES!" I heard my self saying. The plan was to ride our bikes into town around Noon and spend a few hours paddling out to Grass Key and back. That was perfect for us since we (Elaine....lol) needed to do laundry. Normally we would use our Splendide, however, our site only has water and electricity (no sewer connection) so we did not want to fill up our gray tank prematurely. They have an excellent laundry here at Sunset Isle. While the clothes were in the washer we walked over the onsite AdaBlue Cafe and got breakfast....I had the egg/bacon/cheese biscuit sandwich ($3.50!). The prices are very reasonable for everything at this resort! 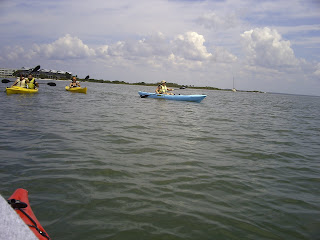 We ended up with a group of 7 and were able to rent 2 tandems, and 3 singles. The tandems were $45 for 3 hours, and the singles were $25 for the same period of time. We launched our sea kayaks around 12:15pm and began our short paddle over to Grass Key, less than 2 miles over open, but lake like water....a perfect day for paddling. I think the last time Elaine and I paddled a kayak was 20 years ago on our 20 year anniversary in Kauai, but we did fine. There is very old cemetery on the island that you can hike to, which we did....the trail is probably about 1/2 long. I think the oldest graves were from the mid 1800's. At one time the island housed a Union Army garrison during the Civil War, and there was actually a pencil factory there during that period. Now the island is owned by the Water Recreation Bureau, and been allowed to return to its natural state. 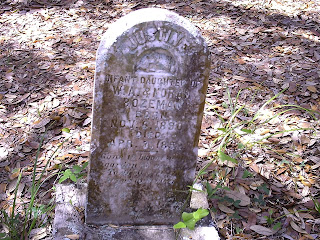 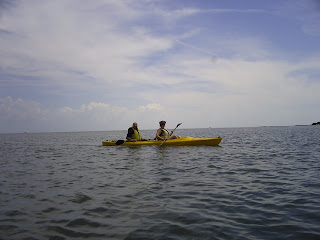 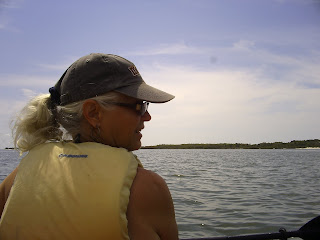 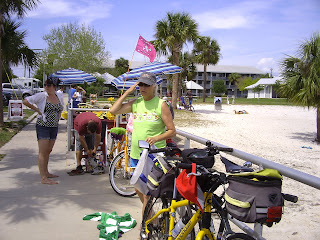 Back at the rental agency
We arrived back at the rental agency, and turned in our kayaks and life vests, and then headed over the warf area to get some home made ice cream......I chose my favorite, rum raisin, of course! Was that ever great ice cream.....several people in line heard me raving about my cone, and ordered it too....they were not unhappy to have followed my lead.
Later that evening we attended a potluck being held at the Tiki Bar, located at Low Key Hideway just a long block from Sunset Isle. One of the waitresses brought some venison that she bbq'd , and others brought fish, chili, and we brought a couple of bacon wrapped filets. All the food was shared....we had some amazing sea trout, and grouper, and the chili was to die for. Low Key is a small motel, which also offers 4 RV sites right on the water, and, of course, the Tiki Bar where domestic and imported beer is served by the bottle, and, also, wine by the glass. It is open air, and many locals show up near sundown to have a couple of drinks, chat and watch the sun set. This great little place is run by Pat and Cindy Bonish of "Every Mile A Memory" fame.....they traveled for many years pulling a trailer, and living mostly off the grid using their solar panels (300 watts), and wind generator (400 watts at 10-12 mph wind speed). They came to Cedar Key a couple of years ago and stayed on to run this little resort and get it back on its feet at the request of the owner. They will be back on the road soon.....at least that is their plan. The gravitational pull of this little Key community is hard to break. 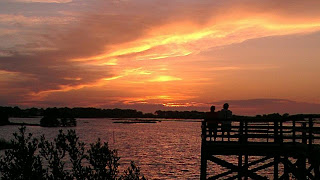 Another amazing sunset at the Tiki Bar
We spent several hours sharing and listening to other fulltimers sharing their adventures. What a cool, eclectic group of people. Some are in their late 20's, some in their mid to late 30's, some in their 40's and up to our age group. We all share a common love for the RV life and changing our views weekly, monthly, daily. Many of them are working as they travel to support their journey. One young couple, Brian and Maria, are visiting brew pubs around the U.S. and have a blog (TheRoamingPint.com). We love brew pubs, and craft beer places, and seek them out. Their blog has reviews of almost 200 of these cool places, which we will refer to as we travel.
The couple we originally came to visit, Chris and Cherie of Technomadia, also work on the road....they are both involved in the technology world. This is a fascinating group of people and we have loved spending 2 days with them.......tomorrow we head east again over to Stuart, FL.
That's it for Thursday! Thanks for stopping by!
Posted by Whatsnewell at 4:07 AM