My day ended yesterday with the Newell half washed.....well, a little more than half, because I washed the roof, the driver's side, and the front....so 60% done. This morning I decided before I would finish washing the coach that I would clean the massive radiator first, and, of course, if I clean the radiator I have to clean out the engine compartment, too. That is a messy, gunky, 2 hour job, but very necessary....I had noticed the last couple of travel days that the engine temps were running about 10 degrees higher than normal. A Detroit Diesel 2 stroke operates at 180-185 degrees under normal conditions.....mine had been hitting 195+ the last couple of days. Once that was done, then the rest of the Newell was done in about 15 minutes.
Thankfully Elaine had turned on the A/C a few minutes before I came in to take my shower, so the air was already dry inside. Which reminds me.......I saw a guy wearing a T-shirt today that said "SWEAT, RINSE, REPEAT"....that pretty much describes life in the deep south. The humidity is ever present. I was telling my sister this evening that when the humidity would get up to 61% in Ontario I would notice, and fuss about it. When the humidity gets down to 61% here in Louisiana I notice it, and am grateful......all a matter of where you are standing at the moment.
After I made myself presentable again we headed over to Nicholls State University (just a few miles from where we are parked) to attend their annual Swamp Stomp which features Zydeco bands for 3 days. We spent about 5 hours there enjoying the fun, upbeat music along with a cool breeze, cloud cover, and low humidity at the aforementioned 61%.
From Wikipedia: Zydeco is a form of uniquely American roots or folk music. It evolved in southwest Louisiana in the early 19th century from forms of "la la" Creole music. The rural Creoles of southwest Louisiana and southeast Texas still sing in Louisiana Creole French.

Zydeco music was born in the late 1860s as a blend of Cajun music and two other "new" American music styles: blues and rhythm and blues. Haitian rhythms were also added, as Haitian natives moved to Louisiana to help harvest the new cash crop - sugarcane. 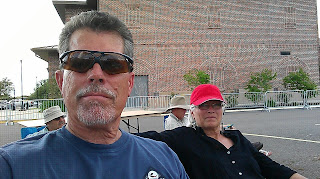 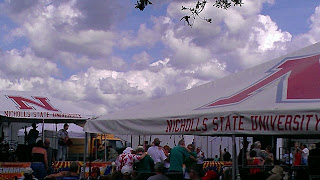 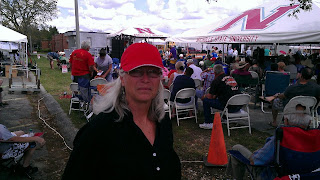 On the way home we stopped at Bubbas II Sports Bar to have some crawfish and shrimp.....yum!
We got home around 6:30pm......I was expecting a SKYPE call from my sister, Jill, in Michigan at 7pm. We talked about 40 minutes just sharing life, and what is happening in each others lives......SKYPE is sooo cool. An hour later my brother, Philip, from California called and we talked with him, Jeannie (his wife) and Dani (his daughter) for about the same length of time. As I have said more than once, SKYPE makes it a little less painful to be away from family for long periods of time. Just a couple of nights ago my youngest daughter, Sharon, called me out of the blue on SKYPE to ask me what I thought of Derek Fisher being traded by the Lakers to Houston......wow, I was really out of touch....I had not even heard that news yet!
Also was able to watch the ends of a few NCAA basketball games today. There have been some great games this year so far.
Well, there you go....another day in our life on the road.....and what a nice life it is.
Thanks for stopping by!
Posted by Whatsnewell at 8:32 PM