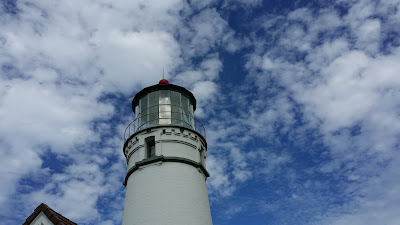 Thursday was our last 'middle shift' at the lighthouse, and we could not have asked for a nicer day to spend 6 hours outdoors greeting visitors.......if only we would have had visitors. Usually when we open at 1000 hours there are several cars waiting at the gate to drive up to the lighthouse, but Thursday there were zero.  We didn't get our first car until 1015.....as it turned out we barely broke 100 visitors coming in at a scant 104 for the day, which is, by far, the lowest visitor total TLE and I have experienced on any of our shifts this season.  I think Thursday's temps were by far the warmest we have had out at the lighthouse this year, and once again the wind was virtually nonexistent. 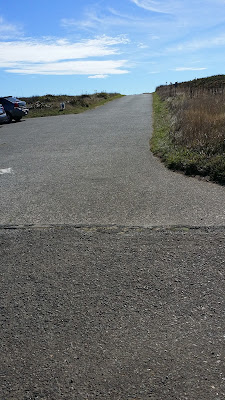 We had so much free time we spent time talking to each other..... 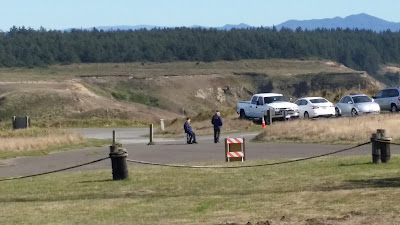 Gary and Angie keeping each other company

.......in spite of the low visitation numbers the time passed quickly and we were home by our usual 1545 hours.

We scheduled another campfire get together for 1830 hours, and this time had a full house with all four lighthouse keepers sitting by the fire telling funny stories.  I have to admit that Mike and Liz tell the funniest stories of all of us.....we were still going strong as 1930 hours approached, but suddenly we began to feel rain drops.  We were all so surprised that two of us actually thought we were hit by bird 'doo doo', however, within just a few seconds we realized it was rain, and quickly put everything away and headed back to our individual abodes for the evening.  Last year campfires at least a couple of times a week were the norm, and it was how we got to know each other better, but with the fire ban this year we haven't had those opportunities.  I was beginning to think I had hauled all that hardwood up from SLT in vain, but now it is paying off.  We should be able to have one more fire over the next couple of days before the next forecast rain arrives.

We were in bed by 2230 and knocking on the gates of dreamland shortly thereafter.....thanks for stopping by!
Posted by Whatsnewell at 7:45 AM