After a couple of weeks of 'going, and doing' Tuesday seemed to fit the meaning of the lyrics that introduce this blog entry.....it was a day to 'turn down the volume', and just relax, read, nap.......maybe putter around the coach taking care of a few tasks....so that is precisely what TLE and I did.

TLE's foot was still hurting from the rock she stepped on the other day so after doing a bit of vacuuming she spent the rest of the day with her foot elevated whilst reading.  I had a list of 4 things which needed to be done around our home.....1) check the oil and coolant levels in the BIG generator (7.5 kw), 2) replace the filters in our ROS (reverse osmosis system), 3) install the new igniter/flame detector sensor in our front Suburban gas heater to see if that is why it won't stay lit and 4) re-attach the cable to the sewer cap that came off the last time I dumped the tanks.

The generator coolant levels were fine, but I had to add a quart of oil to bring it up to snuff.  The changing of the water filters went without a hitch.  I successfully installed the new igniter/flame sensor, but that did not solve the problem, so now it is down to the control board, which means I will have to remove the entire heater to get at the control board to replace it......disappointing, but now I know what needs to be done.  Finally the re-attachment of the cable to the sewer cap (keeps it from 'wandering off') went smoothly.  Nothing took longer than it should and I was in my recliner and back into a good book I have been reading for a few days before noon.

The solar panels reached 100% once again sometime early afternoon....it was partly cloudy, but in spite of the clouds our system functioned as it should.

We had agreed the night before to have an early happy hour followed by our last potluck dinner as a group.....as I mentioned Steve and Linda will be leaving our encampment Wednesday to return to the Borrego Springs Desert.  We had a roaring fire to start off the evening........ 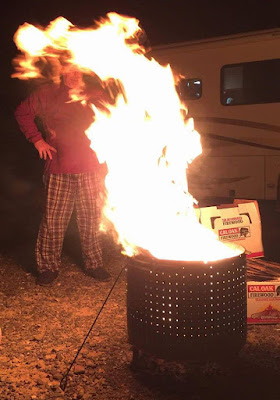 .......and if as on cue the sunset provided its own visual fire!  My good friend Steven Dempsey took this amazing picture of our 6th Quartzite sunset with our Newell in the foreground........ 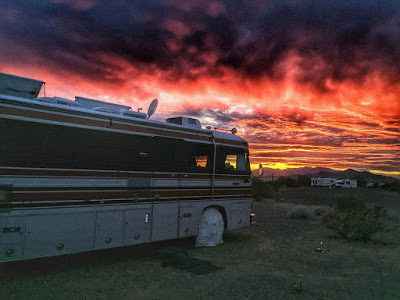 ......around 1900 hours we were chased inside by the threat of rain as we began to feel rain drops on our heads.....as it turned out it never really rained.

TLE and I spent the remainder of the evening watching programs we had previously recorded, but not yet watched, and were in bed by 2200.  Wednesday we drive the VW south 93 miles to Los Algondones for our rescheduled dental appointments and we will need to get an early start.