No, the title is not a "typo".  Just before sitting down to write this entry I read an article by a friend, Nick Russell, called "Living Two-Gether".  He writes about two people living together in 300 square feet.....Nick has slides on this motorhome.....for us it is more like 250 square feet, but the principle is the same.  Boiled down to its essence, it is one thing to love someone, but a totally different thing to like someone.  When you can combine those two emotions into a relationship then you get "Living Two-Gether".  We often hear the phrase "In Love", but how often do you hear someone say they are "In Like" with someone?   Just as others who read his article commented, we also get asked the same question all the time....."How do you live together in such a small space?"  If that is a question that has come to your mind read Nick's article......he lays it out perfectly, and has the life experience to back it up.  He and his wife have been living in a motorhome for over a decade.

The many couples we have come to know through this nomadic lifestyle have all come to the same conclusions Nick has, just as we found ourselves going through the same evolution over the past 3+ years of learning how to live with each other in a small space.    Before we began our fulltime journey we lived, pretty much by ourselves in an 1800 square foot home with a three car garage, a front yard, and a back yard.  We were able to spread out within the confines of our property/neighborhood to give each other space when needed..........and let's face it, even if you love each other, and also like each other, there are times when you need time away from each other, right?  How does that work when you now spend pretty much 24/7 together in a space that is a fraction the size of your stix and brix home?

When I was proposing to TLE that we spend a few years living and traveling in a motorhome she was also concerned about how it would be to live with me in such a small space.....can you imagine that?  I was pretty sure we could do it, but she needed convincing, so I suggested we lease our home out for a year, move into our motorhome, and live in a nearby county park (Rancho Jurupa Regional Park) to give her time to see if we could indeed live......and not just "live", but enjoy living with each other in a small space. 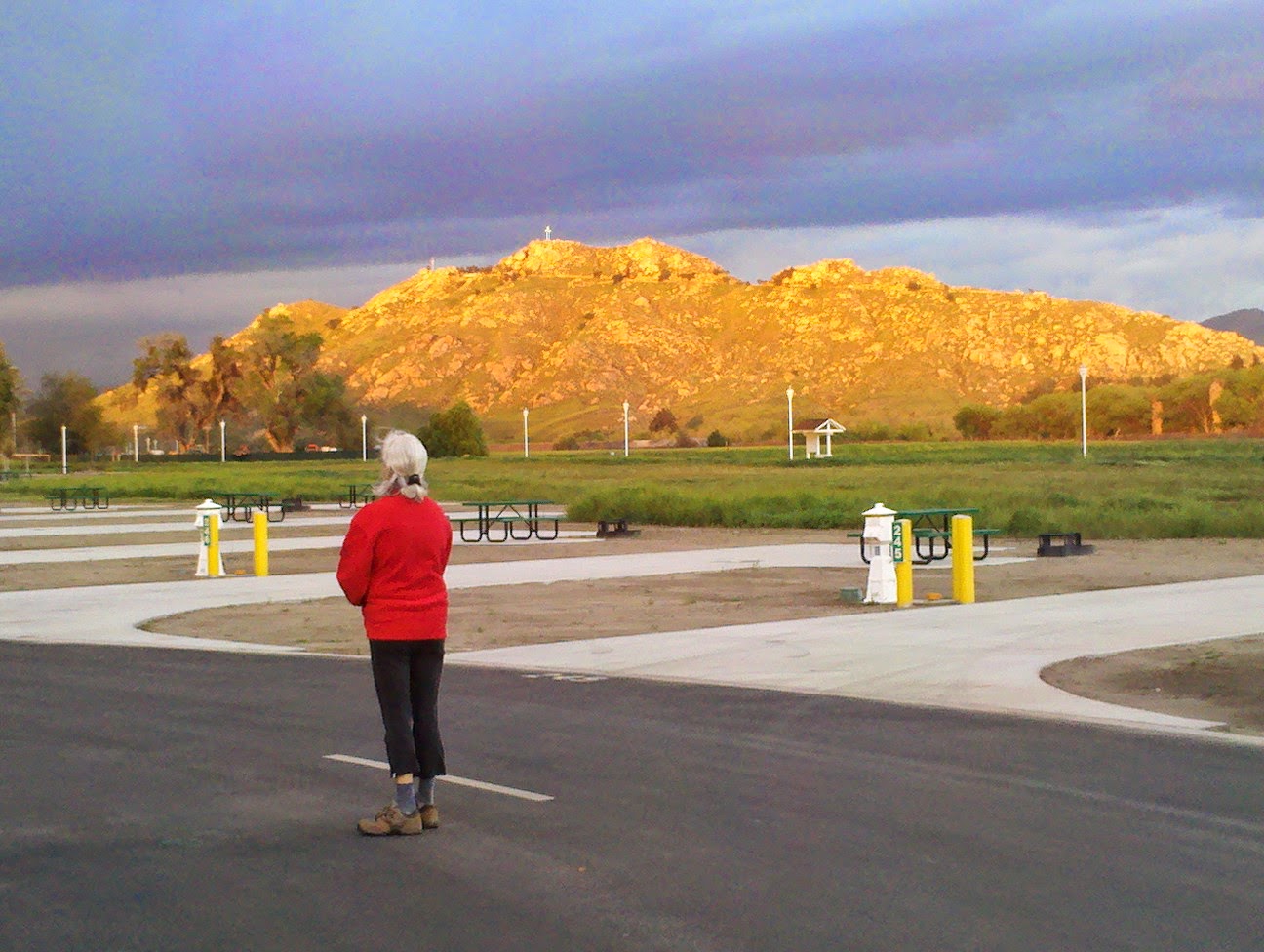 That first year was a learning experience, and, thankfully, at the end of the year TLE agreed that she could, and so, therefore, would live with me in a small space.......whew!!!  But even with that experience under our collective belts our relationship living on the road, in a small space, has continued to evolve.  I often tell people I think we have a better relationship now than when we first became nomads.  Most of our nomadic friends will tell you they were friends before romance entered their relationship, and being good friends.....if you will, "being in like"....... is the foundation for living this lifestyle successfully.

So, you might be wondering, what happened Monday, June 30th?  Well, for one thing June 30th marked the end of 29 months of successful nomadic living, and 41 months living fulltime in our Newell.  As we have done so for the past 2+ weeks, we sat down to watch a World Cup soccer match at 9 am between France and Nigeria, which was scoreless until the final minutes of the game when France scored two late goals to win.  The 1 pm game was also a thriller between Germany and Algeria, and was also scoreless....it went to the 30 minute overtime  when Germany finally scored.....they won the match 2-1.

In between matches I took another bike ride, only this time I rode up towards Meyers to pick up Pioneer Trail which took me all the way over to Stateline, and then back along Tahoe Blvd......total ride 17+ miles with 1400 calories consumed.  TLE took a long walk and did some "small" shopping at Raley's before returning home.

The afternoon soccer match ended just before 4 pm, so we spent the rest of the afternoon reading outside, and also ate dinner outside.  Monday was the warmest day we have had here in SLT.....89 degrees!  We went to bed with pretty much every window open.

Thanks for stopping by!
Posted by Whatsnewell at 8:19 AM