There is this ongoing tension between the TVC office personnel (those of us actually on site here at TVC) who answer the phones by day, and the Reservation Call Center ("RCC" for short) personnel who answer the phone before and after hours.  I don't know where these "RCC" people are geographically located (I've heard Florida.....who knows for sure), but it seems some do not know the difference between a 20 foot long site and a 45 foot long site, or, for that matter, between a "cabin" and an "RV" site.   Each day we have a few people arriving, who have driven long distances, only to find that someone in the "RCC" decided they should be able to fit a 45 foot LONG motorhome into a 20 foot LONG site.  It's the "Round Pegs Into Square Holes" syndrome........it doesn't work, right?  Well a few in the "RCC" must think the laws of physics are suspended here in South Lake Tahoe......that round pegs really can be put into square holes......that 45' behemoths can fit into sites meant for van conversions.  It must be true that most of those in the "RCC" do know the difference, because 85-90% of the time they match up the right site with the right RV, but that 10-15% of the time they fail to do so is what occupies 85% of our time some days. 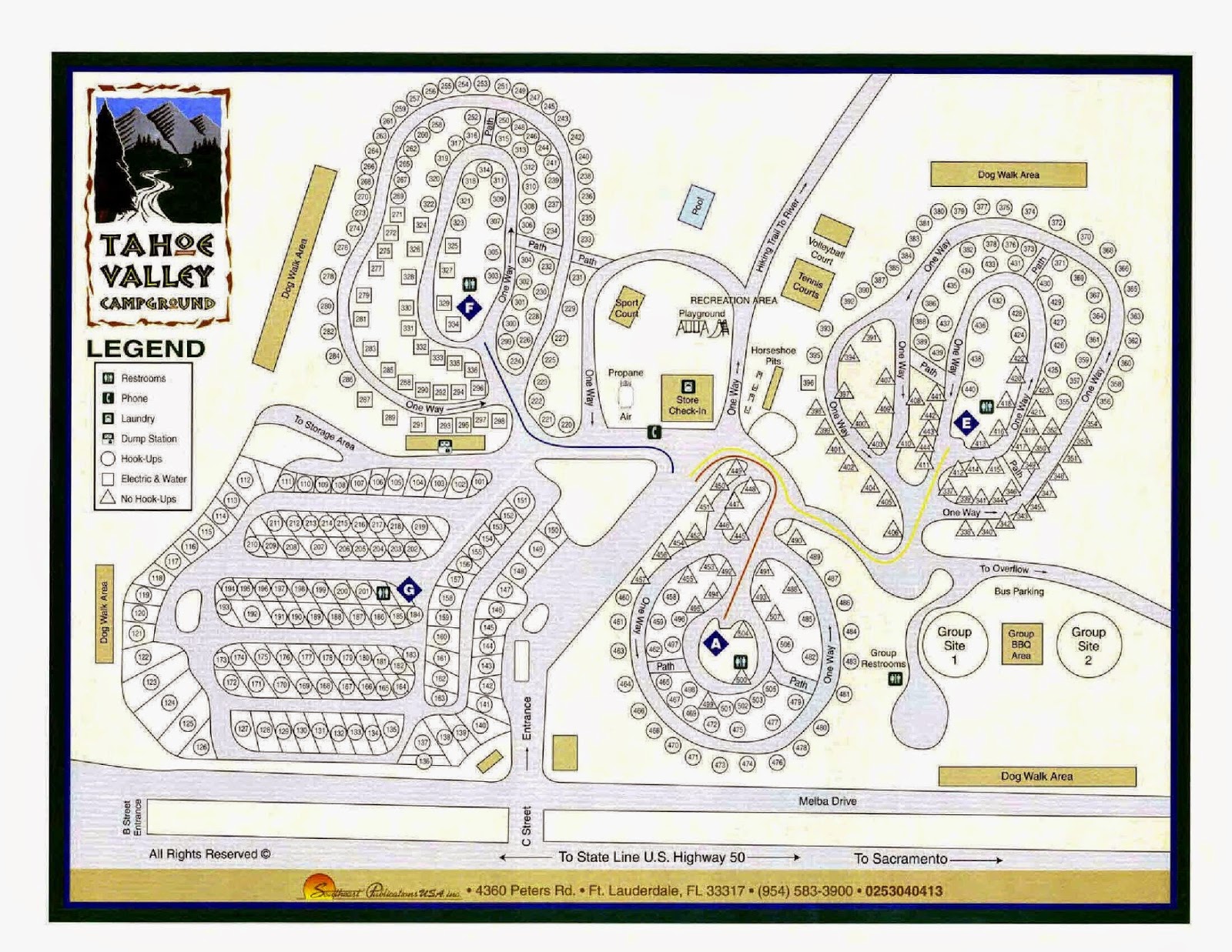 There are close to 400 sites here at TVC as the site map above demonstrates.  If at capacity with the "overflow" area being employed then you are looking at over 500 sites in use on a busy holiday weekend such as the 4th of July this year.  I know that the good folks at the "RCC" take reservations for several campgrounds, so it's no wonder mistakes happen, and I certainly do not mean in any way to demean their efforts.  We only have to be experts on one campground, TVC.  Nevertheless, it seemed on this Sunday that most of our efforts were aimed at taking "round pegs" out of "square holes" and placing them where they belonged.  As we advance further into the summer season this task becomes more and more difficult as there are fewer open sites for us to juggle.

We were on the job Sunday by 9:30, and stayed pretty busy until our quitting time at 6 pm.  We took our "lunch break"  at 1:30 and were able to watch about 30 minutes of the World Cup final between Germany and Argentina.  Regulation time (90 minutes) ended with the score tied at 0-0, but at the 113th minute Germany scored the winning goal, and won 1-0 in an exciting, well played match between the two best teams in the tournament.  Germany was clearly the best team in the end.  Now life will be back to normal, and we will not be glued to our outside TV every day.  It was a great month of soccer, and we are so grateful we could watch over 90% of the matches this time around.

Around 7 pm we headed over to fellow staff members, Ray and Carol, site for a fire and cocktails (it was BYOB).  We sat laughing and giggling for a couple of hours before the local mosquitoes chased us back inside.  It was a good day, and we have now completed 6 days in the TVC office.  We are both getting more comfortable in our responsibilities, and continue to enjoy our summer here in SLT.

Thanks for stopping by!
Posted by Whatsnewell at 8:20 AM