Wednesday was Brayden James day for TLE......we both drove up to Rancho Cucamonga around 0930.....as usual I took my Cannondale Bad Boy bike with us, and after spending some time 'ooohing and ahhhhing' over THE BABY I changed into my bike clothes, bid adieu to TLE, Brayden and Sharon, then took off riding to my son's office just 2 miles away to pick up mail and visit for a while.  The weather Wednesday was quite cool.....it was probably high 50's to low 60's when I began my ride so I was wearing a long sleeve shirt, vest and bike tights. 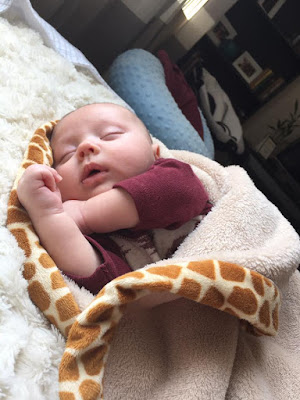 After visiting with my son, Chris, for about 40 minutes I next rode over to the local Lowe's to pick up a couple of 9 volt batteries and some of the round (about the size of a nickle) 2032 batteries for the garage door remotes at our house.  Then it was south on Haven to our house in southeast Ontario.

I spent about 2 hours there fiddling with the remote controls, but could only get one at a time to work....for some reason the Liftmaster door opener would not 'pair' with more than one remote at a time.  It's been 5 years since I had to deal with this issue and I'm sure I'm forgetting a simple step in getting this done, and I'm sure I'll figure it out eventually, but that was as much time as I had to dedicate to that issue as it was time to complete my 30 mile bike ride home to our coach.

I pretty much followed the same route home I took the week before when I did the round trip ride from Riverside to our house, and arrived home just as the cyclocomputer 'clicked' over to 30 miles and some 1800 calories burned.  My weekly weigh in showed me at the same mark I was last week......I was hoping to lose another pound, but staying even is not too bad either.....I've still got 4 weeks to hit my interim goal.....a little less than 2 pounds more!

Just before TLE arrived home it began to, unexpectedly, rain once again, and just as the evening before it continued for about an hour before abating.

Thanks for stopping by!
Posted by Whatsnewell at 7:34 AM