6:51 am - Mountain Time - Thursday - 48º F, 74% humidity, wind 9 mph out of the south........chance of rain, and because there is a chance of rain (65% right now) we need to get our wheels rolling sooner than we thought.  I'll have to write my blog post about Wednesday later today after we get to Quartzite!

Wednesday saw us tearing down our camp, folding up the awning mat, stowing the patio awning, putting the last things away in the trailer, then ultimately reinserting the VW Beetle into the trailer just as the sun set.

In the morning before all of the afternoon activity I drove into Surprise to the local O'Reilly's Automotive store to buy some 10-30w oil for our new generator and some Sta-Bil fuel stabilizer additive as required by the warranty and operating instructions, then returned to unpack the new Predator Generator, fill it with oil, then add the Sta-Bil, then fill the fuel tank with 87 octane regular gasoline.  The instructions suggested pulling the start rope 20 times to prime the engine, but it only took 15 pulls before she started.  I let her run for a few minutes to be sure all was well, and it was. 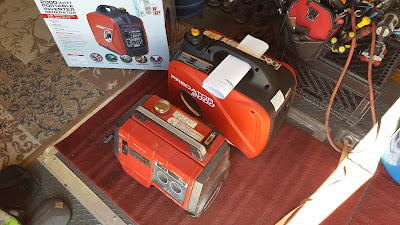 The old and the new

Around 5:15 pm I got out our Sea-B-Que BBQ to grill a filet mignon whilst TLE roasted some veggies for dinner.  We ate while watching a Netflix original series called 'The Crown', which came highly recommended, and we were not disappointed.  It essentially chronicles the life and times of Queen Elizabeth II beginning in the late 30's......very, very interesting, and certainly a departure from 'Breaking Bad' which we recently 'binge watched'.

We were in bed pretty early, and it is a good thing, as I related above..... Thursday we drive to Quartzite..........thanks for stopping by!
Posted by Whatsnewell at 5:56 AM