I started off Thursday in a more ambitious way than I had planned......at first I thought I would just clean off the coach entrance door, but before I was done I had cleaned off the entire passenger side from the right front wheel to the right rear bumper.  By late morning I was feeling pain in my right hand (between my thumb and index finger), and by the time I went to bed my right shoulder was barking at me.  Nonetheless, the passenger side of the coach, including the ALCOA wheels, are smiling once again.

We had made plans to meet some friends from Parker around 2 pm at the 'BIG TENT' for a late lunch.  We have known Steve and Patty since they bought their Newell around 8 years ago.  Ironically, they also have a 1982 Newell, and our coach VIN numbers are one digit apart....theirs came off the assembly line immediately before ours.  To further the irony, the last name of the person who had our coach built was 'Law', and so was the person who had their coach built.....we have surmised that the two individuals were related, perhaps brothers.  The paint schemes are nearly identical..... 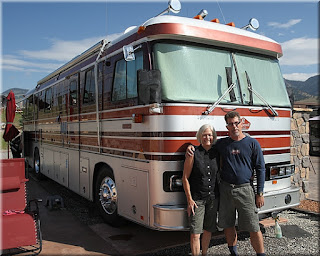 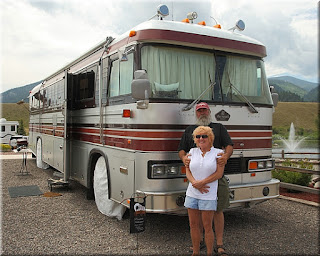 ......the only major difference is that theirs is 38' long, and our is 36' long.  These two pictures were taken at a Newell mini rally in Creede, CO back in 2009 I believe.  Currently Steve and Patty are spending 3 months in Parker on the Colorado River in their 1982 Newell, and we will be joining them this weekend for a few days.

We began our walk over around 12:45 to spend some time walking the aisles of the 'BIG TENT', and then over to Tyson Wells before hooking up with Steve and Patty for lunch.  We ate at the Randall Concessions and Catering stand on the east side of the tent.....they have an enormous BBQ doing where they turn out BBQ'd chicken, pulled pork, ribs etc.  TLE and I got a half chicken to split, an order of their amazing curly fries to split, and a large ice tea to split.....the chicken was amazing (and so were the fries)!  We talked for almost two hours before saying our 'until next times', which will be just a few days from now.

Charles and Bobbie came over for a sunset fire around 5:30 (sun sets around 6 pm), and we were treated to an amazing sunset...... 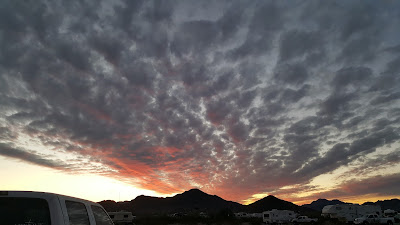 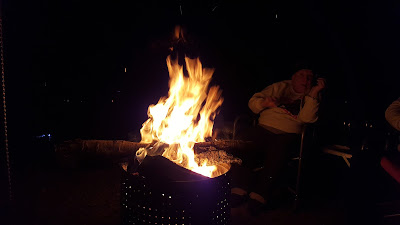 ......a few stats before I sign off about Thursday......our gray tank is only about 1/3 full, our black tank is just over half full, we have used 50 gallons of water.......there 90 gallons left, and our batteries hit 100% once again.  Even with the super cold weather (for us anyway) our batteries have only been doing down to 85-86% overnight.  I have been turning on the big generator for about 25-30 minutes first thing so I can run our electric heaters in conjunction with our gas heaters to warm up the interior faster.  Once it is comfortable inside I shut down the generator and we are once again living off the sun!

Thanks for stopping by!
Posted by Whatsnewell at 7:31 AM