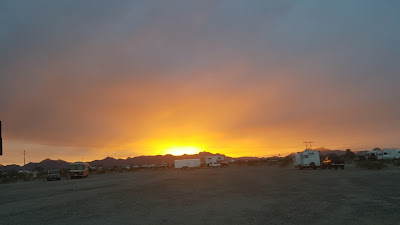 As I reported early Thursday morning we had to get our act together sooner than we had planned as it had begun to sprinkle around 6 am........our friend Tom's backyard does not react well to copious amounts of rain, and if it rained hard enough for long enough we would be stuck and not be able to move Thursday, hence the rush to depart the backyard.  As it turned out we got the final things stowed, and were idling out to the front of Tom and Darlene's home by 8 am on the dot....... 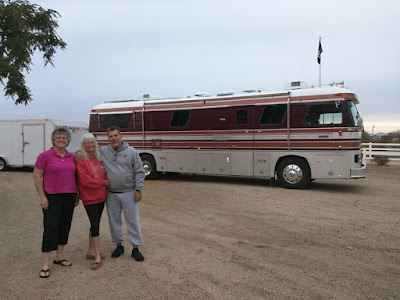 Tom is taking the picture 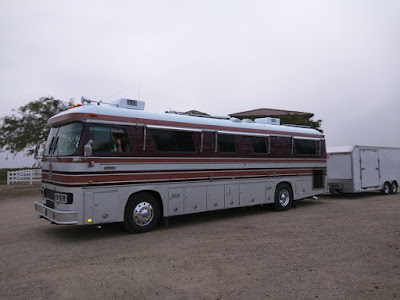 .....we said our 'until next times' to Tom and Darlene, and were off in a cloud of dust.....as we merged on to SR60 it began to rain in earnest, and by the time we were passing through Wickenburg it was raining quite briskly.  We only had 110 miles to travel Thursday and the miles flew by quickly.  Before long we were passing through Aguila, the Brenda, then we were merging on to I-10 and only had 14 miles to go to Quartzite.

The Newell was running smooth as silk.....the coolant temps were right around 183º F, and the tranny and oil temps were barely registering.....the cruise control was cruising, and the Jake was 'jaking'.....I rarely ever had to use the brakes!  Before long we were exiting I-10 and it was just 10:10 am!

Our immediate destination was the Riggles exit off of I-10 where there is an ARCO fuel station with a large truck/RV parking lot where we planned to park to unload the VW so we could cruise around checking out various boondocking sites where we will spent the next 10 days, or so.  Last January we, along with our friends, found a nice secluded site off Dome Rock Road east of SR95 and we loved it, but it was a longish drive back to the paement, and then to the 'Big Tent' area, plus it was always difficult finding a parking spot that didn't require a 10 minute walk to the 'Big Tent'.  This year we decided to check out the BLM land south of I-10 off of SR95 called 'La  Posa'.  After driving around La Posa West (there is also a La Posa East, which is on the east side of SR95) we found a suitable place to park our Newell and trailer, and it is a 10 minute walk to the 'Big Tent'.......no need to drive our car through mind numbingly heavy traffic to find a parking spot, and still walk 1o minutes!

We found a perfect spot for us where we can face just a few degrees to the north side of east which will enable our tilted solar panels to catch the sun's rays early in the morning and as late as possible in the afternoon.  By the time I had them tilted it had begun to rain, and we were chased inside for about 45 minutes, after which time I returned to my setup duties deploying our flags, and then hooking up the trailer and coach to our new Predator Generator, which I promptly started so we can continue to get those 20 hours of break in time behind us.....I turned on the 'Eco' setting, and let her run for about 3 hours before shutting her down for a few hours........it wasn't too long after that we saw our first sundown this time around in Quartzite....... 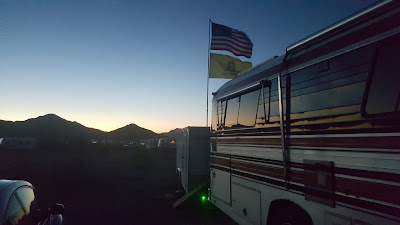 ......eventually I turned the Predator on again and we set about watching several more episodes of 'The Crown', which I wrote about in yesterday's post.....thank you to all who recommended this excellent series......I am hooked!  Since there will be heavy cloud cover the next day, or two we'll be using the Predator a lot, but then the sun will return.

We were in bed by 11 pm, and asleep shortly thereafter........nice to be boondocking once again!