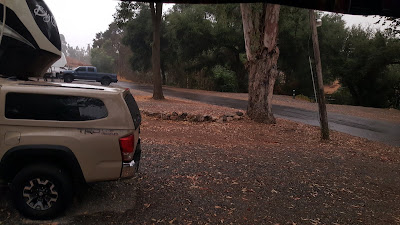 The forecast high for Wednesday was 85° F, but it was over 80 by 9 am.  That was a little concerning, but within an hour you could feel the air cooling, and the high actually was 85°.

There are a series of 8 pool deck drains, and a number of them have not been draining properly since we arrived back in April.  Not a big deal since it hasn't really rained in months, but now that winter is coming we need to figure out what is plugging those drains, so Rich, Dave and I spent a couple of hours investigating the drain system, and trying to unplug it.  We were partially successful in getting 4 of them to drain once again, but the other four will have to wait for another day.  I spent some time at the mini golf course blowing two days worth of eucalyptus leaves away, and ended up sweeping a few of them to get the rest of the particulate matter removed.

I spent the rest of the day continuing my project of separating the split rail posts from the rails, and cutting 6 posts to the appropriate size..... 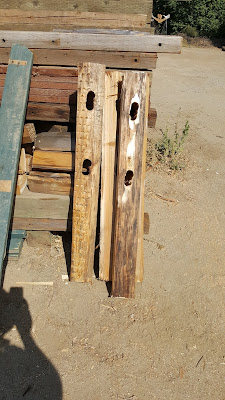 Building up a supply of usable posts 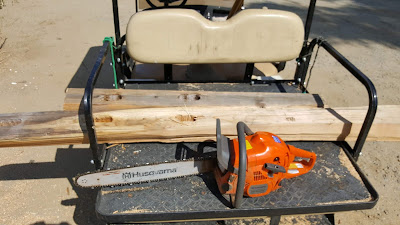 Getting ready to cut a post down to size 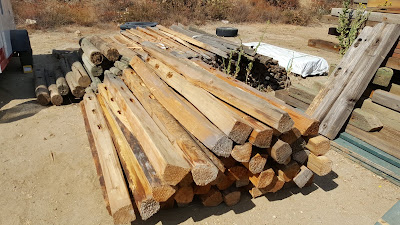 The posts in the foreground.....that is a lot of fencing material! 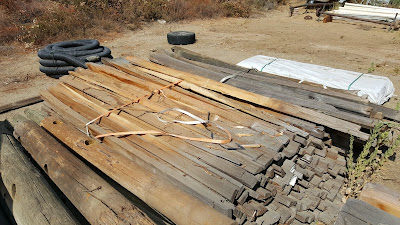 ......and then beginning to replace fencing down by the pond.  There is a long section of fence down by Rich's site which needs to have about half the posts replaced, and about the same number of rails.  When this fence was originally constructed years ago they just screwed the split rails to cabin #24 instead of digging post holes and setting posts for those rails.  I spent the rest of the afternoon removing the screws which affixed them to the cabin, and then digging two post holes and setting the poles..... 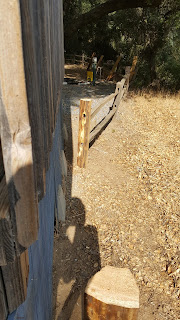 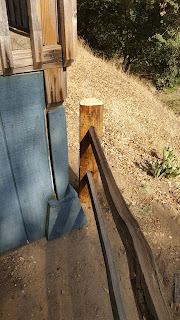 ......I think it looks much more professional now, how about you?  During the process I had to make a couple of side trips.  The battery powering my impact driver (Porter-Cable) ran out of juice, so I had to retrieve a charged battery from the Newell electrical bay.  Then my last Phillips head driver I was using broke so I had to head up to the trailer to retrieve a few more.  By the time the posts were set, and rails attached it was just before 4 pm.

With the wind the past couple of days our artificial turf in our patio area was covered with leaves, and other plant matter, so I quickly retrieved the hand held blower and cleaned the leaves out of our patio.  It was now about 4:04 pm and time to put away my equipment.  TLE must have thought I forgot her as I found her walking home as I was heading to the office.  By the time I dropped off my 2-way radio, and tools and headed home she was just unlocking the Newell door.

We spent the evening catching up on recorded shows.  The Fall TV viewing season has begun so we had recorded episodes of NCIS, NCIS: New Orleans, Bull, & Gold Rush to watch.  While we finished catching up on those shows the premier episode of the 'Survivor' was recording, so we also watched that 90 minute premier before heading to bed a little after 10 pm.


When you shop Amazon, please use our link (below) to access their website.......we will appreciate every purchase you make using our Amazon Affiliate link, and  remember, using our link will not add one penny to your purchase, plus we will receive a small commission which over the course of a year adds up to enough to by a tank of diesel for which we thank you very much!
Posted by Whatsnewell at 8:04 AM