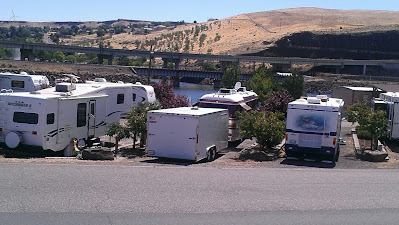 Monday was a very straight forward day for Fred and I.  We were assigned to trim the hedge which separates sites 35 and 36.  It was quite high (not our highest by any means) and Terry wanted us to cut a foot off the top, and a foot off the site 36 side.  We spent about 90 minutes on that task, and then headed off to do site checks at 11:30 am finishing right at 12 pm.  TLE worked a 9-11 am shift, and was there to greet me upon my arrival home.  Another two hour 'grind' in the books.....lol.
The final round of the PGA Northern Trust Tournament (first of three post season tournments to determine this years FedEx Playoff champion out of the top 125 golfers in 2021) was postponed from Sunday to Monday due to Hurricane Henri, which was pounding the New England coast.  The Northern Trust Tournament is held in Jersey City, which is not far from the open ocean, so the rainfall was significant on Sunday.  I had that playing in the background as I continued to organize the trailer in anticipation of VW insertion, just 5 short weeks away now.  It was also time to dump our black tank again, so I took care of that in short order before heading back inside to watch the final holes of the tournament.  At end of the regulation 72 holes there was a two way tie for first place so they went to sudden death, again.  I think this is like the third, or fourth tournament in a row this has happened.  This time, after just one playoff hole, the winner was determined, and now the remaining top 70 golfers play in the BMW Championship next weekend.
It appears 'summer' has passed us by with nary a whimper.  The overnight lows are dipping into the mid to high 40's again, something we have not seen for weeks.  The 15 day forecast, which takes us to the end of the first week in September, has highs in the low to mid 60's.  I think we'll have to turn on our A/C units one day just to exercise them, because it does not appear we will ever need them here in Coastal Oregon.
We were hoping to BBQ outside, but the wind came up around 3 pm nixing that idea.  TLE grilled, indoors, her famous Cilantro Salmon, and was it ever delicious!  The marine layer managed to remain in abeyance enabling me to get a nice sunset picture.....

by the way, I'm having to walk half way down NW Cross Street to get sunset pictures again.
Thanks for stopping by!
When you shop Amazon, please use our link (below) to access their website.......we will appreciate every purchase you make using our Amazon Affiliate link, and  remember, using our link will not add one penny to your purchase, plus we will receive a small commission which over the course of a year adds up to enough to by a tank of diesel for which we thank you very much!
Posted by Whatsnewell at 8:21 AM