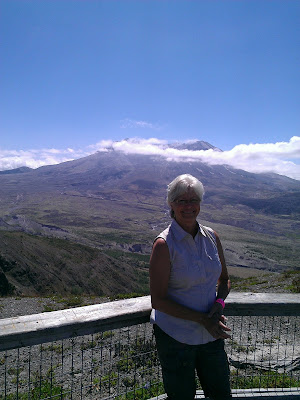 .....and on this date in 2017 TLE and I were hiking to the top of Bunsen Peak in Yellowstone NP to watch the solar eclipse with Roscoe, Geni and Dodge (Kristen Dodge).......good times.....↴ 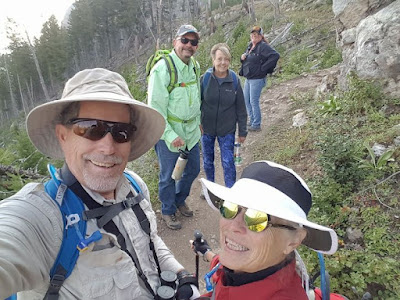 Back in my workaday life I was up each day between 5:30 and 6 am, and TLE for many years went to work at 4 am, so she was up really early.  Even though it has been over a decade since it was necessary to be up that early (other than our most recent Amazon stint) I still feel a tad guilty for 'burning daylight' on days when we sleep in until after 8 am,  but that doesn't mean I don't still do it.  Friday was one of those sleep in days....we weren't out of bed until 8:45 am....how delicious is that?
The reason we slept in so late is we were binge watching the final 7 episodes of Season 3 of the Amazon Prime series entitled 'Absentia' (2017) starring Stana Katic (Starred with Nathan Fillion in the popular TV series Castle from 2009 to 2016).  We (I) discovered this series a little over a week ago, and as immediately hooked.  It took TLE a few episodes of Season 1 (each season has 10 episodes) to get hooked, but hooked she was.  We recommend it very highly!
After finishing my latest blog post I headed outside to wash our 2007 American Trailer.  I haven't given her a good cleaning in several months, so she was due for a little tender loving care.  While I was at it I also worked at straightening the lid on her tool box mounted on the tongue on the trailer.  I hasn't been shutting correctly for some time, and after some minor manipulation I was able to get it straight once again, and now both latches lock firmly when the lid is shut.....
,

The tool box lid is now flat once again, and locks properly

....while I was washing the trailer the sun made another unexpected appearance, so after I finished I sat in one of the Adirondack chairs to soak up some vitamin 'D'.....there hasn't been a lot of sun during Fogust, so when she does appear you take some time right then to enjoy it.
Of course, after working on the trailer a nice nap was in order....TLE says I was 'out' for an hour.....sweet.  Not much else to report about Friday....mostly overcast all day with a couple of hours of sun showers.  The sun briefly reappeared around 7:55 pm...about 20 minutes before sundown....so I hopped outside to capture its brief pre-sundown appearance....

....within two minutes she was swallowed by the offshore cloudbank....thanks for stopping by!
When you shop Amazon, please use our link (below) to access their website.......we will appreciate every purchase you make using our Amazon Affiliate link, and  remember, using our link will not add one penny to your purchase, plus we will receive a small commission which over the course of a year adds up to enough to by a tank of diesel for which we thank you very much!
Posted by Whatsnewell at 9:01 AM