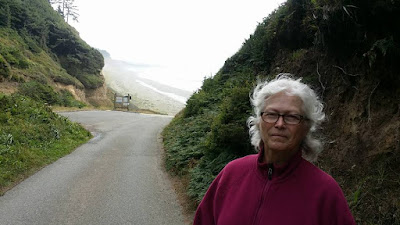 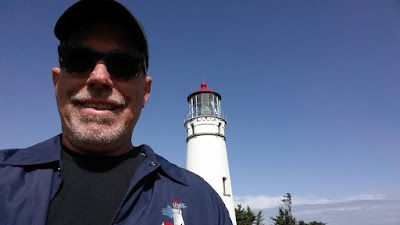 Sunday was, as I wrote yesterday, the 50th anniversary of our vows, but it was also a work day....only two hours of work, mind you, but a work day none the less.  Fred and I trimmed 5 hedges, and called it a day.  I was home by 12:20 pm, and settling in to watch the final round of the BMW Classic, the second of three tournaments which comprise the FedEx Cup.  At the end of regulation Patrick Cantlay, and Bryson DeChambeau were tied at 27 under par.  Little did we know they would play 6 playoff holes before Cantlay was declared the winner after making a birdie on that final playoff hole.....DeChambeau just missed his birdie attempt.  In fact he missed at least 4 putts over those 6 playoff holes which could have given him the win.  They finished just before sunset in Maryland.
TLE and I had reservations at Georgie's Beachside Grill (4 stars on 1001 reviews) in Newport for 7 pm....even though it has been mostly foggy, and overcast all week, we wanted to give ourselves a chance at a sunset dinner.  We left home around 6:40 pm, arriving at Georgie's in 10 minutes.  We were seated minutes later, and were pleased to find we had a good chance at a sunset.....

Toasting to another 50 years

Picture postcard sunset....how perfect is that?

.....it was just clear enough for us to see the sun set.  We ordered cocktails, then a bottle of Pino Noir.  TLE ordered their Seafood Stew, and I their 8 oz. Filet Mignon with sautéed mushrooms, and crusted bleu cheese.  I had a bowl of Cheerios for breakfast, and nothing else the rest of the day in preparation for this dinner, and I'm glad....I had just enough room for everything.  We had one of those nice, leisurely dinners filled with laughter, and talk about the past, present and future lasting almost two hours....we didn't want it to end, but alas Georgie's closes at 9 pm.
There is construction ongoing just south of the Yaquina Bay Bridge, and we got caught in it on the way home, sitting for almost 15 minutes on the bridge, but it didn't matter....we continued our talk about this and that all the way home.  It was a truly memorable anniversary dinner, the memory of which I will cherish for years to come.
Thanks for stopping by!
When you shop Amazon, please use our link (below) to access their website.......we will appreciate every purchase you make using our Amazon Affiliate link, and  remember, using our link will not add one penny to your purchase, plus we will receive a small commission which over the course of a year adds up to enough to by a tank of diesel for which we thank you very much!
Posted by Whatsnewell at 8:27 AM