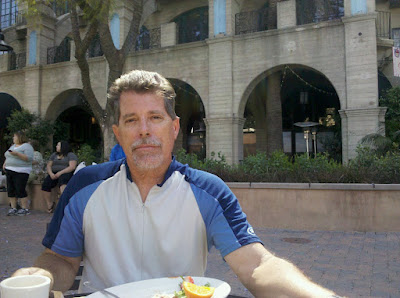 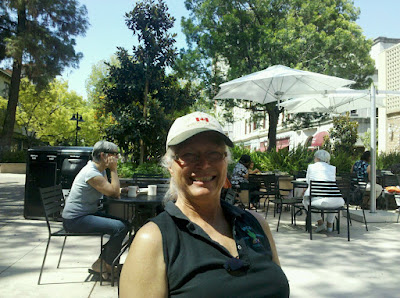 Began raining around 9 pm Friday evening, and rained most of the night
Friday morning we headed into Alturas for our weekly shopping run, and since it is 40+ miles round trip we make lists of everything we need, and usually make stops at Ace Hardware, Rite Aid, and Holiday Market to cross things off our lists.  Friday was no exception.  Our first stop, however, was at the Indian Casino to fill up the VW fuel tank where we found the price of Premium Unleaded had risen 50¢ since our last fill up to $5.99/gallon, but that was still a dollar lower than prices in town.  Next up was Rite Aid where I needed to buy tooth paste, and dental floss, and TLE some lotion.  We also stopped off at the seasonal aisle to look at the Market Umbrellas we had checked out last time.  Then they were listed at $69.99, but there was a sale sticker this time around advising all umbrellas were on sale for 60% off.....wow....$42 off....we'd be stupid not to buy one, so we decided not to be stupid....the cost came to $27....what a killer deal!  We had wanted an umbrella to keep sun off the picnic table if we chose to eat outside, and it is perfect.....

.....at Ace Hardware we bought some weed killer to kill the dandelions that infest our grass area, and some grass seed to fill in some of the bare spots near our artificial turf.  Our final stop was Holiday Market where wre spent $173 for a small basket of food....let's go Brandon....thank God we don't need baby formula.
We were home before noon time, and awaiting the arrival of Charles and Phyllis.  We got the call about 1:30 pm that they were about a mile from the Likely Place Road, so I drove the Club Car down to the entrance to meet them, and lead them to their site, which is right next to ours here on the employee row......

....Charles knows his equipment pretty well, and had their Landmark 5th wheel ensconced in site #54 within a few minutes.  After exchanging hugs, and talking for a few minutes we left them to get setup for the next four nights.
Around 2 pm we took them on a Club Car tour of the facilities which included a drive along the perimeter road around the golf course, and were back by 2:45 pm.  We were planning on light dinner fare Friday night at the 5th wheel, so TLE headed over to assemble several charcuterie trays with Phyllis whilst I remained home taking a nap.  Dinner was planned for 4 pm, and I woke up around 3:50 pm, and headed over to the Landmark to find everything just about ready.....

Phyllis and TLE consulting about culinary stuff, and possibly about our Saturday night dinner fare....I think I heard the term 'rump roast' mentioned a few times.
....we snacked, talked and laughed until after 8 pm before bidding our evening adieus and heading home.  Charles always carries a large selection of wines with him on his summer trips, and we were blessed to sample some Sauvignon Blanc with the charcuterie fare, and later a splendid Malbec with dessert.  I think there was also some Bourbon sampling as the evening came to a close.  We are looking forward to some sightseeing Saturday, weather permitting....I say that because it appears we may have more rain Saturday afternoon, so we'll see about that.
Thanks for stopping by!
Posted by Whatsnewell at 8:14 AM