Sunday evening I picked up the GT STS-1 Full Suspension bike belonging to Pat Bonish.  While we were at the Tiki Bar Pat and I did a quick overview of his bike to see what needed to be done.  From the time I got Pat's message Sunday afternoon I was eager to see the bike, and to start working on it.  I woke up around 2:30 am Monday morning thinking about the process of disassembling the bike, and what problems I might run into.  I haven't taken a bike apart for over a year, let along reassembled it.  Usually when I take a bike apart it is to part it out on Ebay.

If you have been following my blog for a while you will remember that when we were stationary back in Riverside, CA I bought a number of bikes on Craigslist for good prices, took them apart and sold each component separately on Ebay usually doubling my money, and sometimes tripling it.  Pat's bike is the kind of bike I would look for.  It had been sitting for a few years, and in this seaside climate, even if the bike is kept in doors, eventually the salty air works its magic and corrosion begins to appear, shifter and brake cables seize up, and eventually the bike becomes non-operable.   Usually the owners are overwhelmed by what needs to be done to bring the bike back, and just decide to sell it and move on.  Thankfully Pat decided to let me bring her back to life. 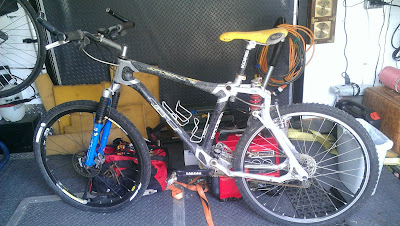 I finally dropped back off to sleep, but was up before 7 am to do my daily blog, so I could get over to the trailer and immerse myself in this new project......take a bike apart and then put it back together.  Over the years I have built 5, or 6 bikes from scratch, starting with just a frame, and buying the components I wanted and creating the bike I wanted, so putting a bike back together is pretty much the same thing. 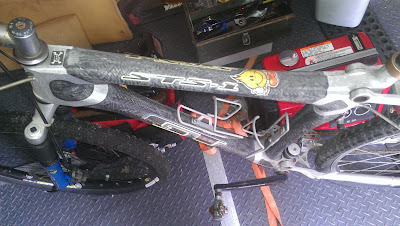 The bike before deconstruction begins 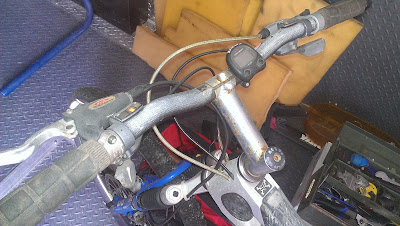 You can see some of the corrosion above and below 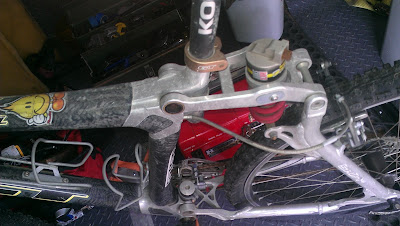 I arrived at the trailer around 10 am full of anticipation.  I moved the tandem outside for the day, got out my generator and powered up the trailer, then put the GT on the bike stand to begin surgery.  The disassembly went quickly.....there were a few bolts that need a little persuasion with penetrating oil, but everything came apart pretty easily.  Below you see the pile of components ready to be cleaned of a few years of grime, and rust. 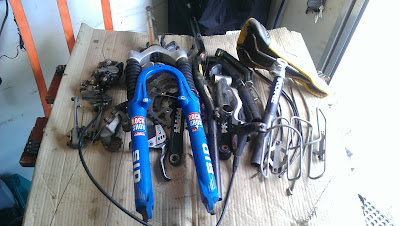 And here you see the frame reduced to its basic essence.  This is really a beautiful composite frame, combining aluminum and carbon fiber pieces, which makes this frame is very, very light. 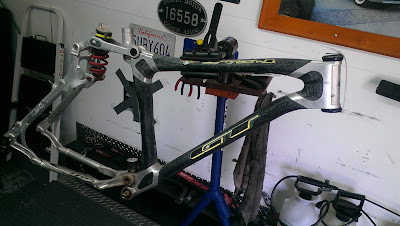 I left the coach without eating breakfast, so eventually TLE arrived with a breakfast sandwich for me, and a fan to help ward of the muggy feeling of the air.  The hours just kind of melted away as I descended "deep into the weeds" cleaning each of the high end components for this bike, which in its day (around 2003-4) was state of the art, and frankly the parts Pat has assembled on this bike are still worth a lot of money.  If these components were the typical entry level stuff you find on bikes off the rack they would have been toast by now, but the components used on this bike cost a lot because they are made to last, and function even under the most extreme conditions.  During the process I received a number of instant messages from Pat on my phone about the things he was ordering from Amazon that needed replacing (chain, shifter/brake cables, grips, tires, etc.), and to each I replied "Yes"....so the order is in and we should have what we need to finish the bike in a few days.  In the mean time I reassembled the bike as far as I could go.  She is looking much happier now after a lot of "elbow grease", real grease, oil, and polishing. 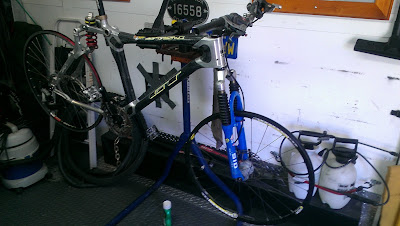 Way back in Vancouver, WA I found these Wellgo platform/SPD pedals, that have an SPD clip on one side, and a regular platform on the other at the local Goodwill for $1.89.  I didn't need them myself, but figured someone would down the road.  Pat was looking for the option of just riding the bike in flip flops if he wished, or with MTB shoes that clip on to the pedals.  I'm glad these pedals have found a new home. 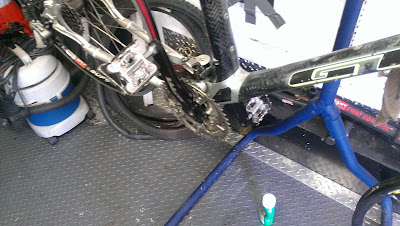 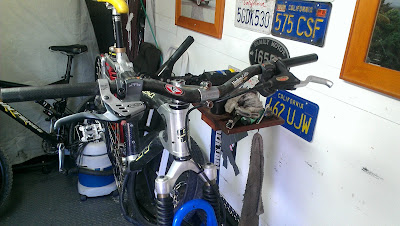 I took a shower, and sat down in my recliner thinking about what a great day I had spent, while eating some salsa and chips (TLE's salsa mind you), and sipping one of the Anchor Steam Porter beers Krash had left with me the other day.  Before I knew it TLE was waking me up, and telling me I had just missed the sunset.  She had just come back from taking this picture.....# 32....I love how the sky reflects off the glassy water.....just breathtaking. 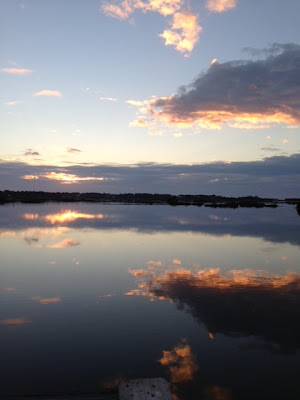 Thanks for stopping by!
Posted by Whatsnewell at 5:38 AM