I was awake far too early Sunday morning, but it's understandable.....I was put in charge of our annual Labor Day weekend horseshoe tournament the day before, and there was a lot of work to be done Sunday morning in preparation.  My mind was going 100 miles per hour processing all the things I needed to get done before 1 pm, which was the start time for the tournament.  I left the coach just after 9:30 am......six hours before the beginning of my normal shift.... 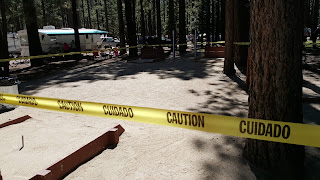 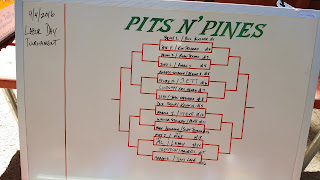 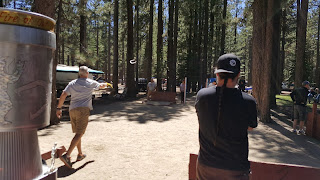 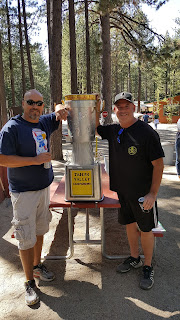 ......the tournament ended at 3:05 pm.....I took care of putting everything away, pumped some propane, turned off a leaking water heater, then clocked out for one hour at 3:24 pm, took a nap, and was back on the job for my afternoon/night shift at 4:25 pm.

I was in the maintenance yard cleaning my cart....it was filthy....when I heard a call on the two way radio requesting all rangers on duty report to the northwest corner of Section G for an emergency.  I immediately replied I was on my way......I found Ben, who had made the call, walking toward Section G and picked him up.  We arrived at site 166 to find a woman sitting in a chair with a bloody knee and a dog bite on her left hand.  She had been walking her very small dog when three off leash dogs came charging out of site 127 at her leashed dog....the lady scrambled to protect her dog and was knocked down by one of the three dogs (pit bull, bull dog and lab) and then bitten on her hand.....her small dog was also bitten, but not seriously........ 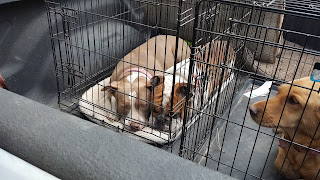 .....the people who owned the three dogs immediately accused the woman of being the cause, and did nothing to retrieve their dogs, or assist the woman and continued to yell at, and taunt the woman for several minutes according to the witnesses.  It was actually a pretty disgusting, disgraceful display of raw human nature.  After interviewing the woman I proceeded to site 127 to find the dogs (pictured above) in cages in the bed of the owner's pickup.  At first they denied the dogs were off leash, or that all three had attacked the woman and her small dog.  I then interviewed 8 other people in adjoining sites who advised the dogs had been off leash not only most of Sunday, but Friday and Saturday, too.....two of the witnesses being 'friends' of the people in 127.  I went back to site 127 to confront them with the witnesses' statements and they finally admitted the dogs were unleashed.  At first they denied one of the dogs was a pit bull, but finally admitted it.

The El Dorado County Sheriff was called along with an El Dorado County animal control officer.....it was confirmed that all three dogs were current in their shots, and then the three dogs were put into a mandatory 10 quarantine.  We were inclined to evict the folks in 127, but the officer advised they were 'under the influence' and, therefore, it would be unwise to force them to drive that evening, so they were allowed to stay overnight, but had to leave at first light today.  I, with TLE spent the next 2 hours calming everyone down, and keeping the parties separated.  The Sheriff promised to return several times that evening to patrol Section G and be sure all remained peaceful, and I, of course, did the same. 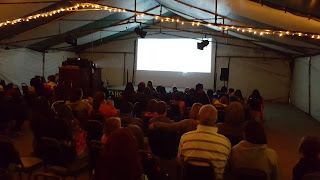 Our Sunday night movie was Zootopia, and we had perhaps our largest viewing audience of the summer.....every seat was taken.... 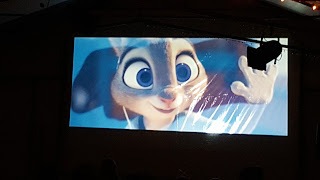 By the time the movie was over it was time for me to do my 'Quiet Hour' patrol, and wasn't that a hoot.  I had to threaten eviction to people in several sites who would not quiet down, but finally by 11 pm all was quiet, and then it was time to do the nightly cleaning of the office/store/laundry areas.

TLE and I clocked out at 12:15 am after checking the restrooms which included several disgustingly clogged toilets.......disgusting is not really a strong enough word, but that is the best I can manage right now.   We had barely settled into our recliners to watch TV for a while when the Ranger phone rang.....dang!  A young woman and her young son had pulled into the park pulling a travel trailer and she was unable to get into her site in the dark, and needed to be able to plug in top run her gas heater as the temps were already down to freezing.  I got dressed again and drove the cart over to the store and had her park next to the horseshoe pits where there is a 30 amp electrical pedestal.  She plugged in, got her heater going and I went back home.....oy vey!

We didn't get to sleep until almost 3 am, and then I was awakened by the aforementioned phone call from my boss......time for a nap!

Thanks for stopping by!
Posted by Whatsnewell at 12:33 PM