Thursday was very, very, very, very cold all day long.  It was too cold to do anything outside first thing, but I did manage to sweep the pine needles off the awning mat and turf before being chased back inside by the penetrating icy fingers of Fall.  When we left for work at 11:45 am it was still not 50 F degrees.  The forecast was for it to reach 51 degrees by 2 pm, but I don't believe it ever got that 'warm'.  In spite of the forecast I wore my usual shorts to work with a jacket, but by 1 pm I was home putting on jeans for the first time since late May, putting on my UnderArmor under shirt, putting on my watch cap, my gloves, and getting out the heavier duty Cabela's jacket.....I fully expected to round a corner in my cart and find a colony of penguins walking down the road..... 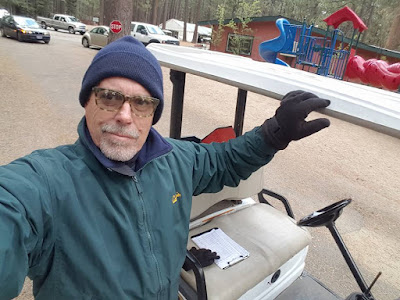 I guess it was only fitting that the first day of Fall saw me wearing my Fall wear to work for the first time since late May.....it's been almost five months now since we arrived at TVC, and we have come full circle weather wise.....the only thing missing is snow on the ground.  Friday was also the second day in a row that our total sites occupied was under 100.....Thursday we only had 83 sites occupied.

After changing clothes I headed over to Section A to work on some fencing that was in need of attention, then got the 'Who's In the Park' list from TLE and did my site checks.  It didn't take too long with only 83 sites occupied, and over 2/3's of those occupied sites are in Sections G and F.  I had planned a few other work activities Thursday, but the falling temperatures ruled out several of those projects.  I decided it was the perfect time to get the company chain saw and cut up some of the longer pieces of firewood I had previously collected so they would fit in my portable fire pit.

TLE was a little under the weather and went home about 3 pm, and since we only had 10 arrivals scheduled, it was decided to close the office at 5 pm.  I agreed to stay on the clock and run around the park once, or twice an hour until I clocked out sometime between 7 and 8 pm.  Each time I left the warmth and comfort of the Newell was painful as it was already into the 30's by 7 pm.  I made my last run down to the maintenance yard to let a customer retrieve their stored trailer around 7:30 to lock up, and then punched the clock at 7:45.

I got home and immediately jumped in the shower to take a long, delicious very hot 20 minute soaking.  We spent the night watching the pathetic Thursday night NLF game between New England and Houston, won 27-0 by New England.....I expected more of Houston.  Then, the highlight of the evening, the day, the week, the summer......we watched Ron Howard's 'Eight Days A Week: The Touring Years' on Hulu......an anthology about the Beatles' rise to fame from 1961 until they stopped touring in 1966..... 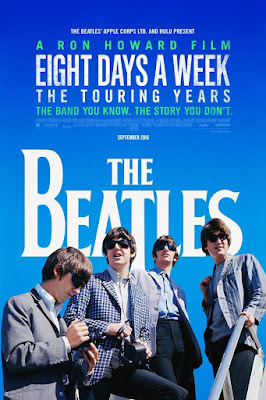 ......IMDB gives this Ron Howard movie 8.2 stars out of a possible 10......for me I would be right near 10.......its run time is 2 hours and 17 minutes, but it did not seem that long at all.  If you are a fan of the Beatles, this is a must see.  The movie ends with a few minutes of their rooftop performance at Abbey Roads Studios.....their last performance together as a group......very nostalgic.

Posted by Whatsnewell at 8:28 AM