Sunday morning I decided I would put my new Trailer Valet to use to move the trailer forward 2+ feet so I could plug it into the Newell and get 12 volt flowing to the trailer once again.  Why you might ask?  Well, I bought a Fantastic Fan to replace the existing 'static' roof vent......I thought it would nice to be able to vent out the hot air once and a while.  At the suggestion of one of my readers I placed a piece of 3/4" plywood under the wheels of the Trailer Valet to provide adequate traction......as you know we are parked on hard packed sandy soil, and with the almost 500 pound tongue weight on sandy soil traction would be an issue.  It took a little while getting the trailer moving forward as the 4 tires had settled a little, as one might expect, into the soil over the past 5 months, but it did begin to move and with the aid of the built in braking mechanism I was able to stop it just where it just close enough to plug it into to the Newell. 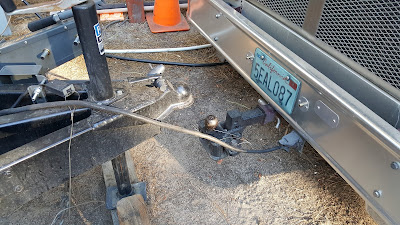 Trailer plugged into 12 volt once again!

By the time I finished putting the tire covers back on the trailer tires, the sun shade back up, and the jacks under each corner of the trailer to keep it more stable it was almost 11 am, and we were going to work at Noon.  Yep, our schedule has changed......we are now closing the store at 8 pm Sunday night through Thursday night, but it will still be open until 10 pm Friday and Saturday nights for the next two weeks.

We were on the job about 11:55 am, and for the first time in 6 weeks I returned to my regular Ranger duties.....making site check rounds.  I was the only Ranger on duty Sunday, and neither the sites, nor the departures had been checked for a couple of days.  As I drove around the park I was startled at how much emptier TVC looked and felt.  Most of our long term customers (here most of the summer) have departed, and the remainder will be out by the end of the week, headed back to sticks and bricks lives, or continuing their full time travels.  This is our first time in the Tahoe Basin after Labor Day in many, many years and it is obvious the weather is changing and cooling at a fast pace.

After finishing my site check rounds I headed to the maintenance yard to begin working on getting the new swings I ordered way back in May prepped and ready for installation.  With the purchase of the quick connect shackles Saturday I was able to now install the swing hangers to which I used the quick connect shackles to hang the swings.  I managed to get the one swing installed on the 'kiddie' swingset and will get the other swing on the big swingset installed Monday.  I had to add 6 feet of chain to each side of this swing seat, which will be installed on the big swingset.  The new swing seats come with 5 feet of chain and we need at least 11 feet for them to work on the big swingset.

While I was in the maintenance shed I spent some time cleaning up, and putting tools away in their proper places.  There are only a couple of us who actually put tools back after using them, so at least once a week someone (Adam, or I) have to put them away so they can be found the next time we need them.

I was called to site 148 to replace the 30 amp plug which had partially melted due to heat generated when one of the cables inside the pedestal  whose insulation had worn away was rubbing against a power buss.  I wrapped black electrical tape around the cable where the insulation had worn through, then replaced the plug and we were back in business.

The time just flew by and pretty soon we were closing the Lounge at 7:30 pm so I could begin dry and wet mopping.  I finished just after 8 pm, and then TLE and made our bathroom rounds before clocking out at just 8:30.  We watched an episode (season finale) of 'Last Ship', then TLE watched a couple of recorded cooking shows ('Chopped' and 'Beat Bobby Flay') and we were in bed by 10:30 pm....hence the early hour at the top of this blog post.