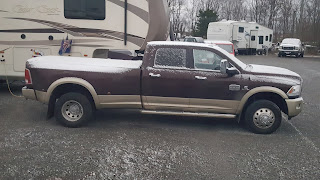 Had a brief dusting of snow overnight 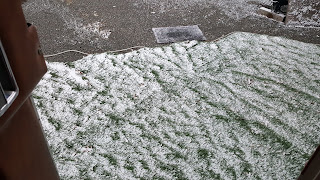 Originally we had planned to drive into Elizabethtown (about 40+ miles) to do some 'junking', maybe visit a micro brewery, or two, and then come home late afternoon, but Mr. Jello intervened in those plans on Saturday evening.  TLE had gone into her hanging closet which is at the back of the coach on the left side of the bed to get something.  She discovered that the carpet on the floor of the closet was wet!  We had just gone through that 'toad strangler' of a rain storm, and it appeared the rubber gasket around the rear window had been leaking for a period of time, but just at the lower corner of the window which reaches into TLE's closet.  My hanging closet on the opposite side was dry.

Well, what to do, right?  It's about 6:30 pm on a work night, and it will take a while to dry out the space.  First up was to get all of TLE's clothing out of the closet, then I immediately removed the carpet piece, put it in a large plastic bag, and took it outside. I then got out some 2" wide Scotch brand blue masking tape and went outside (it wasn't raining at the time), dried off the rubber gasket, and window in the area where it appeared to be leaking, and applied the tape.  This stuff is amazing!  Even with it being a little damp to the touch the tape still stuck, and held through the night through another rain session. 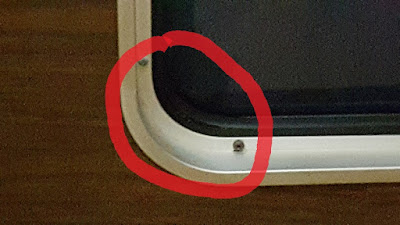 The offending window gasket and where it was leaking

So, we went to bed Saturday night with TLE's clothes all over the salon area of the coach and just decided we would deal with the aftermath of the leak when we were next off work, which as serendipity would have it was Tuesday instead of the expected Wednesday.  Instead of going into Elizabethtown we dedicated our Tuesday to get the floor of the closet dried out.  I took the small heater from the bathroom and set it on the closet floor and let it run all day long in there.  By the end of the day the floor was 98% dry, and should reach 100% sometime Wednesday. 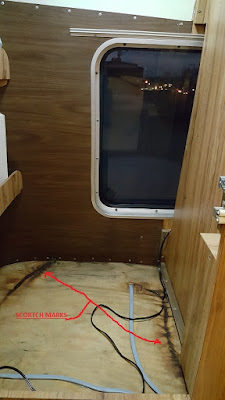 TLE's empty closet...the floor is almost dry.  You will note what appear to be damp spots, but those are old burn,or scortch marks from, apparently, two shorted out wires that were replaced a few years before we bought the coach.

A few years ago when we were at Cape Blanco doing our volunteer lighthouse gig my hanging closet had gotten a little damp (we had a lot of rain that October, and one day hurricane force winds).  It does tend to get a little damp in that back area because of condensation build up on the window when it is cold and damp.  We tend to forget about that area as we don't access those closets very often.  While my carpet did not get 'wet', it felt somewhat damp so we got it dried out, put everything away, and kind of forgot about the problem until this past Saturday.  Why?  Well we spent most of the next few years in the southwest, as well as at Lake Tahoe where it is quite dry as a general rule.  In order to deal with this issue on a long term basis we made a run to Lowe's to buy some 'Damprid' (moisture absorber), some mildew treatment, and a new carpet piece to put down in TLE's closet after it is all dry and ready to use again. 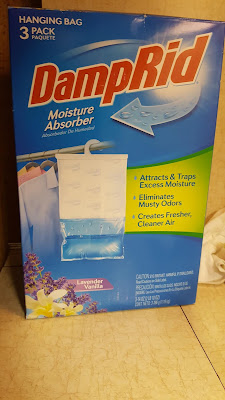 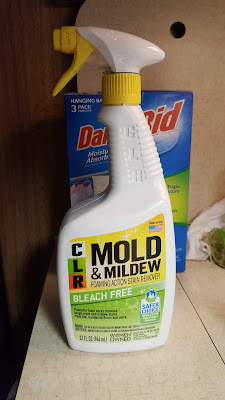 While we were out at Lowe's we dropped off a large bag of clothes we were no longer using at Goodwill (when you begin going through little used closets you begin to realize there are things in there you have not worn in a couple of years.....time to 'thin the herd'!), and then Krogers to pick up some milk and a few other items (including a new supply of limes for some Margarita's later).  That was the extent of our first day off work this week, although we did watch three English Premier soccer matches (two recorded, one live) in the afternoon after returning from our brief foray into the cold December weather.

In the overall scheme of things our little experience with water intrusion is just part of living whether you live in a sticks and bricks home, or in an RV.  Stuff happens and you deal with it, then move on to something else.  Considering that we have been living full time in our Newell for almost 7 years now it is remarkable how few major problems we have had to deal with in that time.  We have managed to rise to the challenge each and every time.  We don't even really consider what happened to be a major problem......just a small bump in the road.

When you shop Amazon, please use our link (below) to access their website.......we will appreciate every purchase you make using our Amazon Affiliate link, and  remember, using our link will not add one penny to your purchase, plus we will receive a small commission which helps defray our travel expenses to a small degree.
Posted by Whatsnewell at 5:06 AM