We are in the Atlanta airport waiting for our 1 hour flight back to Nashville. No time to write more now,  but I will update later today!

Our flight did not depart until 9:30 pm from John Wayne International, so we hung out at Tim and Laila's all day.  Sharon, Rod and Brayden came over for about 2 hours, and Kate with her three kids (Elijah, Charlise, and Jolene Rose) also came by.  We spent time sitting outside in the wonderful sun talking and laughing.  It was good to just spend time with them asking about their future plans.  Kate and Nick have bought their first RV....a 26' Travel Trailer (bumper pull), so another child has entered the RV world.

Around 5:30 pm my oldest daughter, Meredith, stopped by to pick TLE and I up and ferry us to the airport.  We found a Rubio's near the airport and sat eating wonderful fish tacos and talking before she ran us the rest of the way to the airport about 7:45 pm.  We walked quickly through security as we had the coveted 'TSA Precheck' designation imprinted on our tickets.  By 9 pm they were boarding passengers on the SNA to ATL, and we were in the air by 9:26 pm..... 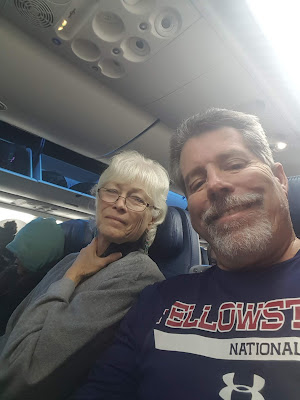 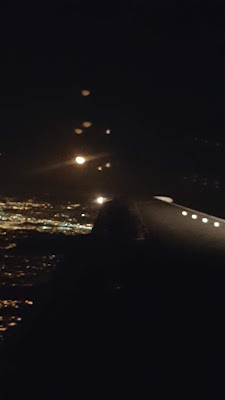 ....the Irvine city lights were amazing! 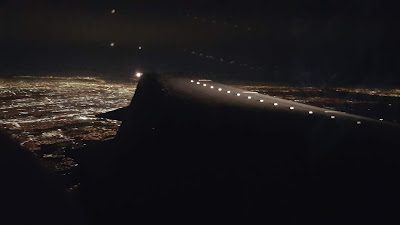 Of course we were flying to the Eastern Time Zone, and we lost 3 hours in time, added to the 4 hour flight time had us in Atlanta (ATL) by 4:20 am EDT.  We had a long hike from gate A-16, where we disembarked from the first leg of our trip, over to gate B-29 where we would catch a jet to Nashville at 8:26 am (a 3 hour layover).....after finding a place to sit until some of the food service places opened up for the day I took a short nap, and then about 5:25 am I walked around to see what was open....... 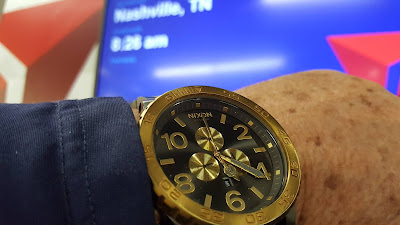 Still 3 hours until our one hour flight to Nashville departs! 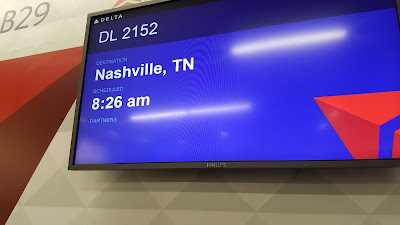 I found a little place to have some breakfast, which we ordered about 6:30 am.  By 7:56 am we were boarding our last flight of the day, and of our whirlwind trip home for Christmas.  The flight left on time and we were exiting the Delta Airlines jet in Nashville (SNA) about 8:30 am Central Time.  The drive back to the Elks Lodge took about 15 minutes, and within 10 minutes of arriving home I was in bed sleeping for about 2.5 hours.  I was up by 12 noon, and we were on the road by 12:18 pm to Chattanooga, TN where we planned to spend the night at a local Walmart Supercenter.  It rained on and off for the first hour, and then the wind took over.  The final blow was stop and go traffic for the last 20 miles to the Walmart....we arrived safe and sound at the Walmart about 5:30 pm.....what a long, long, long day!  Within 15 minutes of our arrival it began raining.....once again....and it rains as I write.  We left SNA on Wednesday night and arrived home Thursday morning, and are now in Chattanooga, TN for the night. 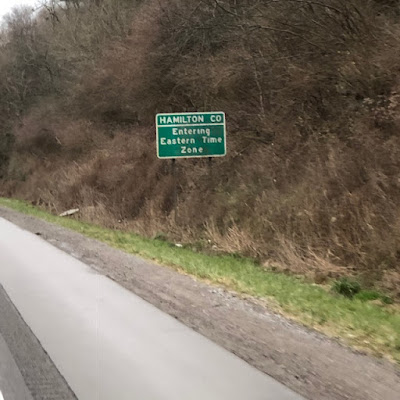 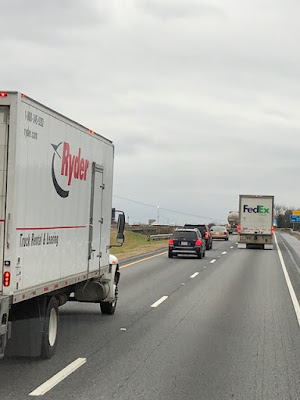 Stop and go traffic for the last 20 miles into Chattanooga

In two more days of driving we will arrive at Cedar Key, FL....one of our favorite places on earth where we will spend an abbreviated time of 6 days.....we had originally planned to spend a month, or more, but things change....I'll write more about that later.


When you shop Amazon, please use our link (below) to access their website.......we will appreciate every purchase you make using our Amazon Affiliate link, and  remember, using our link will not add one penny to your purchase, plus we will receive a small commission which helps defray our travel expenses to a small degree.
Posted by Whatsnewell at 4:31 AM