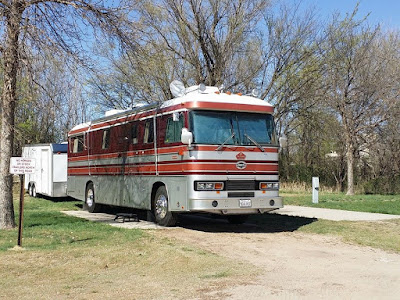 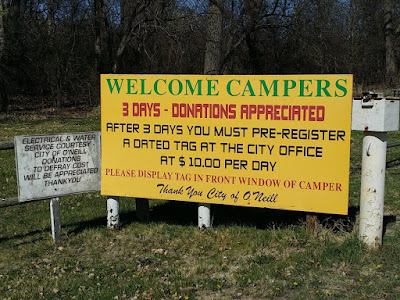 For the first time in weeks we were awakened in the early Saturday morning hours by rain upon our riveted aircraft aluminum roof.  It was still raining when the sun returned from her trip around the earth, and still raining as we bid adieu to the sun once again.  It is still raining Sunday morning as I write today's missive..... 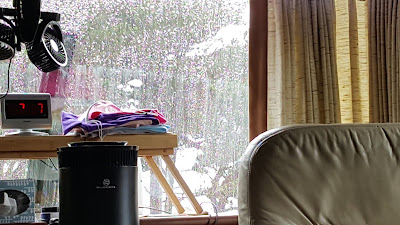 ....it has been a while since we were housebound by the elements here at SRRVC, but Saturday was just such a day.  With continuous rain there is not much to be done outside that does not involve getting wet, so the obvious alternative to to remain indoors where it is dry, warm, and comfortable.
It was a day for streaming programs on our ROKU TV.  I've been watching a YouTube channel called 'Bus Grease Monkey' in which a very talented mechanic (Scott) works on Detroit Diesel 2 stroke engines all over the country.  He travels to each job site in a converted Greyhound Silver Sides bus powered by a DD 671.  His specialty is Detroit Diesel Series 71 engines of all configurations, but mostly 671's, with an occasional 471 thrown in (four 71 cubic inch cylinders in line).  A 671 is six 71 cubic inch cylinders in line, also called a 'straight 6'.  These Series 71 engines also come in 'V' configurations....such as 6v71, 8v71, and 12v71.  He also works on Series 92 engines, which is what we have.  Ours is in a 'V' configuration, involving three 92 cubic inch cylinders on each side of the 'V'.  All of the 2 stroke engines operate the same, and look the same on the inside.  The Series 92 engine comes in the 6v92 configuration (ours), and the 8v92 configuration.  I spent the better part of the day watching his videos, which I find totally fascinating.  Some of the most fascinating videos are the 'bus rescues'.  He'll find an old, abandoned bus which has been sitting in a field for 10 to 20+ years, and get it running, and rolling again.  That is how resilient these old buses with 2 stroke engines are.
That, sadly, or maybe not so sadly,  was the extent of my rainy day Saturday.  It appears our run of balmy, sunny days has come to an end for a while...such is Coastal Oregon life.
Thanks for stopping by!
When you shop Amazon, please use our link (below) to access their website.......we will appreciate every purchase you make using our Amazon Affiliate link, and  remember, using our link will not add one penny to your purchase, plus we will receive a small commission which over the course of a year adds up to enough to by a tank of diesel for which we thank you very much!
Posted by Whatsnewell at 8:25 AM