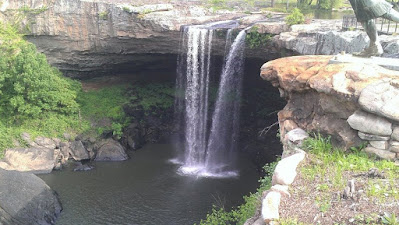 We've been without rain for so long now I've begun to miss it.....lol....I'm just kidding.  I do not miss it one bit.  Most mornings we do not even have any dew.  Things have dried out nicely, but oh the grass is growing fast now.  I just trimmed our site, and the adjacent one (A-3) a couple of weeks ago, and the grass has already grown taller than it was then.  Up until two weeks ago I had only trimmed the grass once in these sites in 4 months.
My assigned task for Monday was to 'wash' the buildings in the campground.  There is the Campground Office building, the Host Office located just behind the main office, the two sheds in which we garage the golf carts each night, the park model located next to the office, the landscape shed, the tool shed, and the bathrooms.....that's it.  Using a long pole with a brush attachment I applied a solution of water and Simple Green to the sides of each building, and then rinsed it off with a hose.  I was able to get the Campground office, Host office, two golf cart sheds, and the park model done in two and a half hours, then turned my attentions to cutting the grass in sites A-1 and A-2 using one of our Stihl string trimmers.  By the time I finished with that it was almost 1:30, or 3.5 hours of work....that's the longest I've worked in one day at SRRVC in quite a long time!
I was barely home when TLE left for her two hour shift.  String trimming is a messy job and I needed a nice hot shower after doing that for an hour.  I spent a good part of TLE's shift reading a new book by Jack Carr, The Devil's Hand, his fourth book in a series called 'The Terminal List'.  My daughter, Meredith suggested this series to me months ago, and I quickly read the first three books, and have been awaiting the release of this 4th book for some time now....it was just released a few days ago. 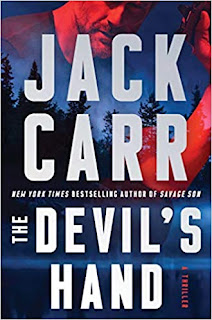 The gravel delivery scheduled for Monday was postponed until Tuesday, and it looks like I will be playing with the Massey-Ferguson loader again for the next few days moving and spreading gravel in numerous sites.
Thanks for stopping by!
When you shop Amazon, please use our link (below) to access their website.......we will appreciate every purchase you make using our Amazon Affiliate link, and  remember, using our link will not add one penny to your purchase, plus we will receive a small commission which over the course of a year adds up to enough to by a tank of diesel for which we thank you very much!

Posted by Whatsnewell at 8:21 AM