Monday we knew we would would re-enter California for the first time since we left almost 21 months ago.  Our destination was Mammoth Lakes, CA.....just about 128 miles to the south of Carson City, NV.  Just 29 miles distant was the California border, and the California Inspection Station, which we have passed through dozens of times over the years we have transversed this section of US HWY 395 north and south.   This stretch of US HWY 395 between Carson City and Mammoth Lakes is one of our favorite stretches of blue highway in the U.S......and for us it has been like a second home. 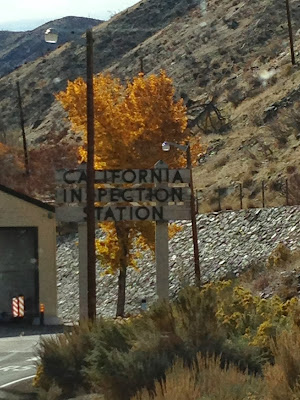 The California Port of Entry is right on the shores of Topaz Lake, and is quite small, but every time we pass through this inspection station I am always concerned about what questions they will ask.....almost as much as when we entered Canada last July.  The last time we were asked if we had any Christmas trees with us.....wait, what?  This time the one and only question we were asked was if we had any firewood.  Sometimes  the questioning is quite extensive, but this time all I had to do was answer "no firewood sir", and we were on our way back into the not so "Golden State".

We glided through Coleville, Topaz, Walker, and Bridgeport.  We like Bridgeport, and had planned to stop here for lunch, but parking along the street was impossible this Monday, and I didn't want to venture on to any side streets in this very small town.  TLE managed to snap a couple of pictures as we passed through. 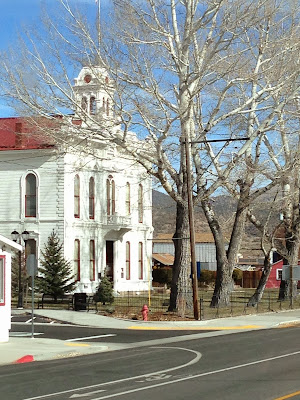 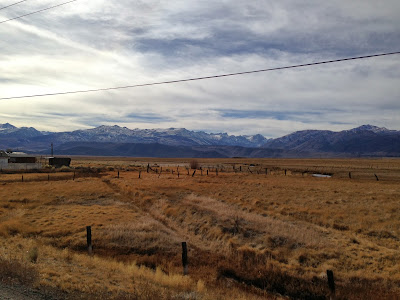 Ranch land just north of Bridgeport....I love this view every time we pass this way.

About 15 miles south of Bridgeport is Conway Summit, which at 8,138' is the highest elevation point along US HWY 395......we have been stopping here for the obligatory picture of Mono Lake for decades.......I can remember stopping here with my parents back in the 50's as we headed home from our Lake Tahoe vacations each summer.  The view is big, long and spectacular, and was no less impressive on Monday.  We dawdled around at the summit for about 30 minutes just enjoying the view.  The climb up to this summit from the north is a long grinding climb......from the south you gain 1,500' elevation in just 4 miles. 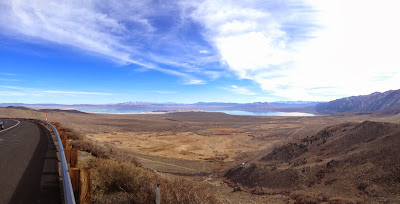 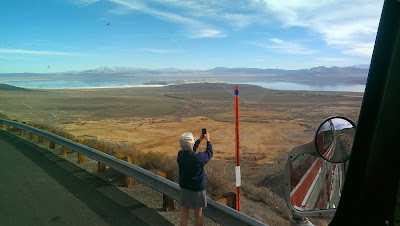 TLE lining up her panorama shot 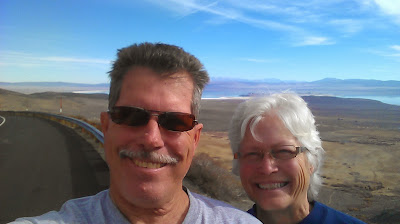 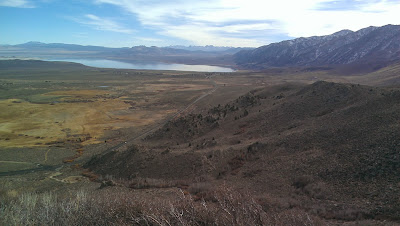 Another thing we almost always do going north, or south through Lee Vining is to stop and have breakfast, or lunch at Nicely's Restaurant......Monday it was lunch.  Again, in town, the parking lanes were just not wide enough for us, so we drove about a 1/4 mile south of town and parked the coach, then walked back into town for lunch....by this time it was 1:30 and I was getting famished. 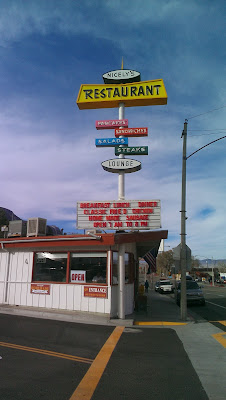 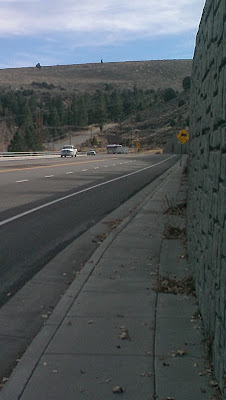 There "she" is just south of Lee Vining patiently awaiting our imminent return.

The food, as always, was good.....TLE had her customary Rueben sandwich, and I had another French Dip.

Just a few short miles south of Lee Vining is the northern entrance to the June Lake Loop road, which we love, but was not in the cards for us today.  You can see the June Mountain Ski area in the distance. 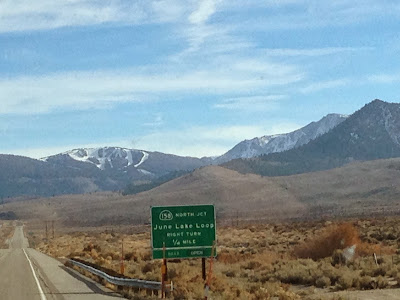 Back in the 60's when we were on our way up to Lake Tahoe we would almost always spend a night near June Lake before continuing on to Lake Tahoe.  I love the June Lake Loop, and if you ever get a chance drive it....you will not be disappointed, no matter the season.

Pretty soon we had reached the last summit of the day, Dead Man's Summit, just a few miles north of Mammoth Lakes.  By 2:30 we had arrived at Mammoth Mountain RV Park located just on the outskirts of Mammoth Lakes Village.  We have stayed here often over the years.  It is quite expensive at $45 per night, but it is the only game in town right now.....everything else is "closed for the season".  This RV park is pretty empty as we are in between seasons here.  There were probably less than 10 RV's in the entire park, so we pretty much had our pick of spots, and chose a water/electric site on the pavement so we would not have to unhook our trailer for the two days we will be here.

I know, we're kind of stretched across several sites, but that's the advantage of being here in the off season.....plenty of room for us.

Around 5:30 we drove into the "Village" for some drinks and an appetizer at Gomez' Mexican Restaurant.....one of our favorite dinning places in Mammoth......and whenever we are in Mammoth we have a meal here. 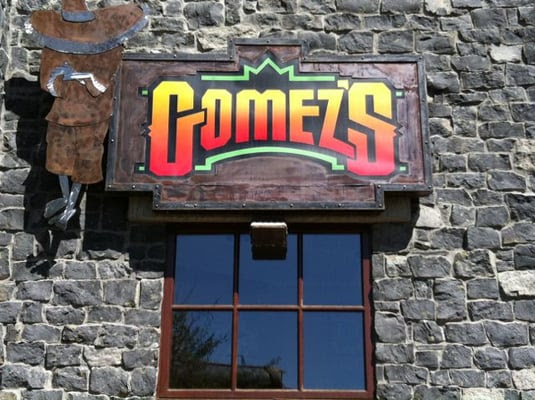 Well, that's it.....we are officially back in California, if only for 2 months, but we have returned, and I know our kids and grand kids are waiting for us to get it into gear and just finish the drive home.....right now we are about 300 miles from home, and it looks like it will take until Friday for us to cover that distance.

Thanks for stopping by!
Posted by Whatsnewell at 8:40 AM