I know I usually start my posts with the weather report.....so here goes.....we woke up to heavy cloud cover, and based on the weather forecast for rain Wednesday night, and most of the day on Thursday, what we saw made sense.  Once again it was nice to step out of the coach into temperatures in the mid 50's.  The overnight temps inside the coach with NO heaters on hasn't gotten below 71 so far......just a couple of weeks ago it would get into the mid 50's inside with the heaters on low.  When it gets that cold it seems as if your feet will stick to the cold floor when you get up in the middle of the to use the bathroom.

Wednesday was our third consecutive day on Kiosk duty.  Frankly, we like opening up more than closing, especially on days when it has been 12 days since the fishing lakes were restocked.  Riverside County stocks the lakes with trout every other Friday.  On days just after the lakes have been stocked the cars filled with fisherman wind around the block before the park gates are opened, and it gets rather hectic at the Kiosk for about an hour as they flood into the park. 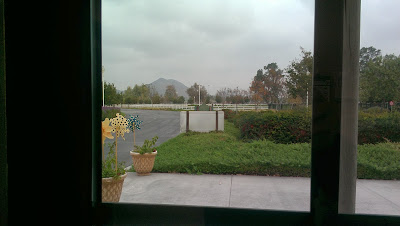 The view towards the park entrance 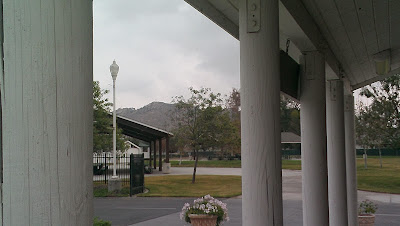 Mt. Rubidoux lurking in the distance 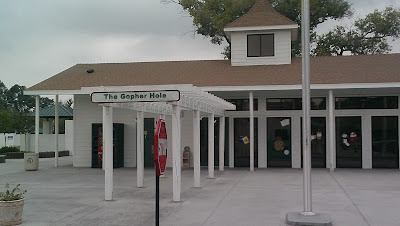 The park store......there is a miniature golf course next to the store, hence the name "The Gopher Hole" 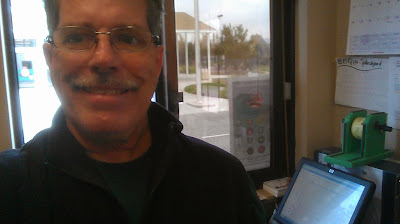 TLE stayed with me until 9 am when Carolyn arrived.....she is one of the paid full time staff members with whom we work, and one of our favorite people.  The rest of my 5 hour shift went smoothly, and I am getting more comfortable every day with being there on my own without any backup.  Now we are "off" for four days, and get to sleep in again....well, maybe TLE will sleep in....I don't seem to get much past 6:30 no matter what time I go to bed.

I spent a big part of the afternoon working in the trailer sorting through more stuff, and adding to my discard pile.  It will probably take a couple of more days to finish sorting through things.  I also decided to permanently mount one of the old Panasonic LCD TV's I removed from the coach in the trailer, so I will no longer have to carry my outside TV out out there anymore when I want to watch sports while I work.  I've got a few coach projects I'll be working on while we are here including fixing the speedometer, and tachometer, so now my work space is set up just like it used to be at my sticks and bricks home....bring on the projects! 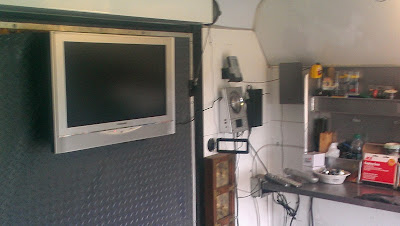 Near sunset we took a long walk around the perimeter walking path here at the park making circuits for a little over one mile, then headed inside for the evening.  The forecast for Thursday is 60% chance of rain, and, in fact, the rain really began around 10 pm Wednesday night.  Before heading off to dreamland we watched Revolution, then Survivor, which recorded while we watched Revolution.

We are gradually getting settled in here at RJRP, and looking forward to doing some riding of the local bike paths, which will include, of course, some of our favorite eateries along the way.

Posted by Whatsnewell at 8:27 AM