I started off Friday trying to fix two running lights I noticed were not working when I turned on the new marker lights Thursday evening.  Over time bulbs wear out, connections become a little corroded, wires fray, and suddenly you have a couple of lights not working as they should.  I started troubleshooting the problem with no expectation of how long it might take, but was pretty certain they would be working at the end of it all.  Ultimately the problem with each non-functioning running light was a worn out bulb, but getting the expired ones out was difficult, and then the same with the new ones.  There was very little clearance for my bulky fingers to grab and twist the bulbs out.....I finally had to cut a piece of duct tape and roll it with the sticky side out to grip the bulbs with enough traction to take out the old ones and install the new ones.  Additionally, the lens on one was cracked so, not having a replacement lens available, I used super glue to seal the crack.  So now, for the first time in a long time all the marker and running lights work.  It hasn't been a big issue as we rarely drive at night, but I do like things to work.

I finished with the light project about 10:30 and decided to take another run on my road bike up to the Emerald Bay overlook again.  Friday was the first time I have done this ride with only my riding shorts and a short sleeve shirt.....it was so cold the first few times I rode that route I had to really bundle up.  As I approached the overlook I realized I was breaking my old time of just over 47 minutes by a lot!  Just as I pulled into the parking lot the timer on my Garmin 205 Edge read 43 minutes, 12 seconds......I was not expecting a 4 minute improvement!  All the mountain biking I have been doing with the 3-4 mile steep climbs is paying off! This time, instead of stopping to take in the view, take a few pix, and catch my breath, I just turned around and headed back down the hill seeing how long I could stand in the pedals......this is the part of riding up a long hill that comes in handy for when I ride my mountain bike.  When you are making a long downhill run mountain biking you, at least I do, spend a lot of time just standing on the pedals.  If you are not used to this your legs eventually start feeling like jelly.  The first few times coming down the hill I could only stand on the pedals for a 1/4 mile here and there, but this time I was able to do it for a mile at a time.  The total round trip ride took 74 minutes, also another personal best.

We had a date to ride over to Steamer's Bar & Grill with Bill and Debby at 1 pm for their weekly fish taco Friday, but Debby had not yet returned from a hike, so the 3 of us pedaled over.  I cannot relate adequately how good their fish tacos are.......until arriving here in SLT my favorite fish taco place was Rubio's, which I wrote about when we were in Riverside for a few months.....now I'm not sure who is first, and who is second.  I had my usual 2 fish tacos, and TLE had one this time....we chased them with ice tea.  We enjoyed a pleasant time talking with Bill about the local area hiking trails, and his 99.99% Vegan diet (he and Debby are Vegans).  As most of you probably know a Vegan diet is strictly plant based......no meat, no dairy.....just plant based food.  On the other hand vegetarians do eat dairy products.  I admire those who can forego dairy and meat in their diet, but it is not for me.  Obviously Bill and Debby make rare exceptions for meat, and fish tacos at Steamer's is one of those extremely rare exceptions.  I think Bill has lost at least 30 pounds over the last two years with this new dietary lifestyle. 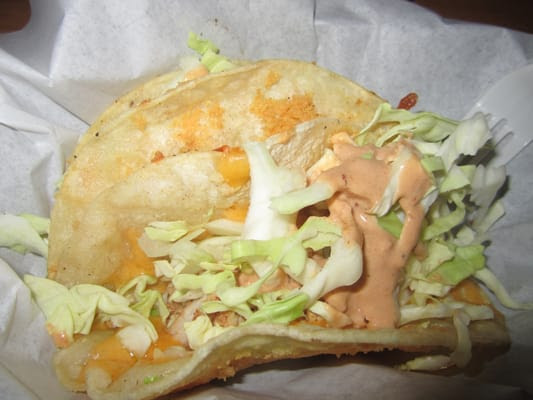 Some of the best fish tacos I have ever had

We returned back to TVC around 2:15, and I spent the rest of the afternoon vacuuming out the trailer, cleaning off the back of the coach, and installing a "screen door" on our coach entry.....we had been using one we fabricated ourselves out of a product called "Magic Mesh" we bought off a TV ad, but it never worked as well as we had hoped.  Don't get me wrong, it is a good product, but we had to modify it for our application, and we just couldn't get it to work with our modifications.   When we were visiting our friends, Tom and Darlene, in Wittmann, AZ they gifted us their old screen door from their 1990 Newell (they have a 2002 now, and it has a built in screen door).  TLE spent part of Thursday working on our old "screen door" before deciding the best option was the custom made one we got from Tom and Darlene, so I installed the snaps for it and hung it.  Once TLE has it all adjusted just the way she wants it I'll take a picture and post it.....it will be nice to be able to leave the door open once the weather gets a little warmer.

Friday was the end of the first of 7 fortnights for us here in SLT, and it is not even June yet!  Still waiting to hear when we will start working, but in the mean time we are just enjoying our free time, and exploring the surrounding area.

Thanks for stopping by!
Posted by Whatsnewell at 8:09 AM