Where are the Keys?

Scratch one more off the "to list".....almost since the day I bought the Newell I have been looking for replacement red marker lights such as the ones seen in the picture below.  I have been able to find the amber colored ones found on the front cap of the coach.  Why the red lenses are no longer available I have no idea.  A few months ago I used the last replacement lens that came with the coach, and the remaining 4 lens had cracks, and were showing their age of 32 years.  I was in the process of planning to change the front and rear marker lights to ones that are still in production, but really didn't want to as I prefer to keep the exterior look of the Newell looking the same as the day it came out the factory door for delivery.

Enter my good friend Todd, who owns a 1984 Newell with the same exact marker lights I have.  He found some NOS (New Old Stock) red marker lights just like ours on eBay a couple of months ago and sent me the link.  I quickly bought 5 and had them shipped to Todd's home in Sioux Falls for me to pick up when we arrived there to pick up the NOS bumper he also found for me on eBay.  I had planned to install the replacement marker lights when I was in Sioux Falls, but you will recall that there was this stiff east wind blowing at 25-35 mph for most of the time we were there, or else it was raining cats and dogs......not the kind of weather in which you would wish to spend 2 hours at the top of a tall ladder.  Well, finally Thursday it was time to do the deed, and the new lights were installed.  I was able to salvage one pretty new lens, and three light bodies for use in the future should any get broken. 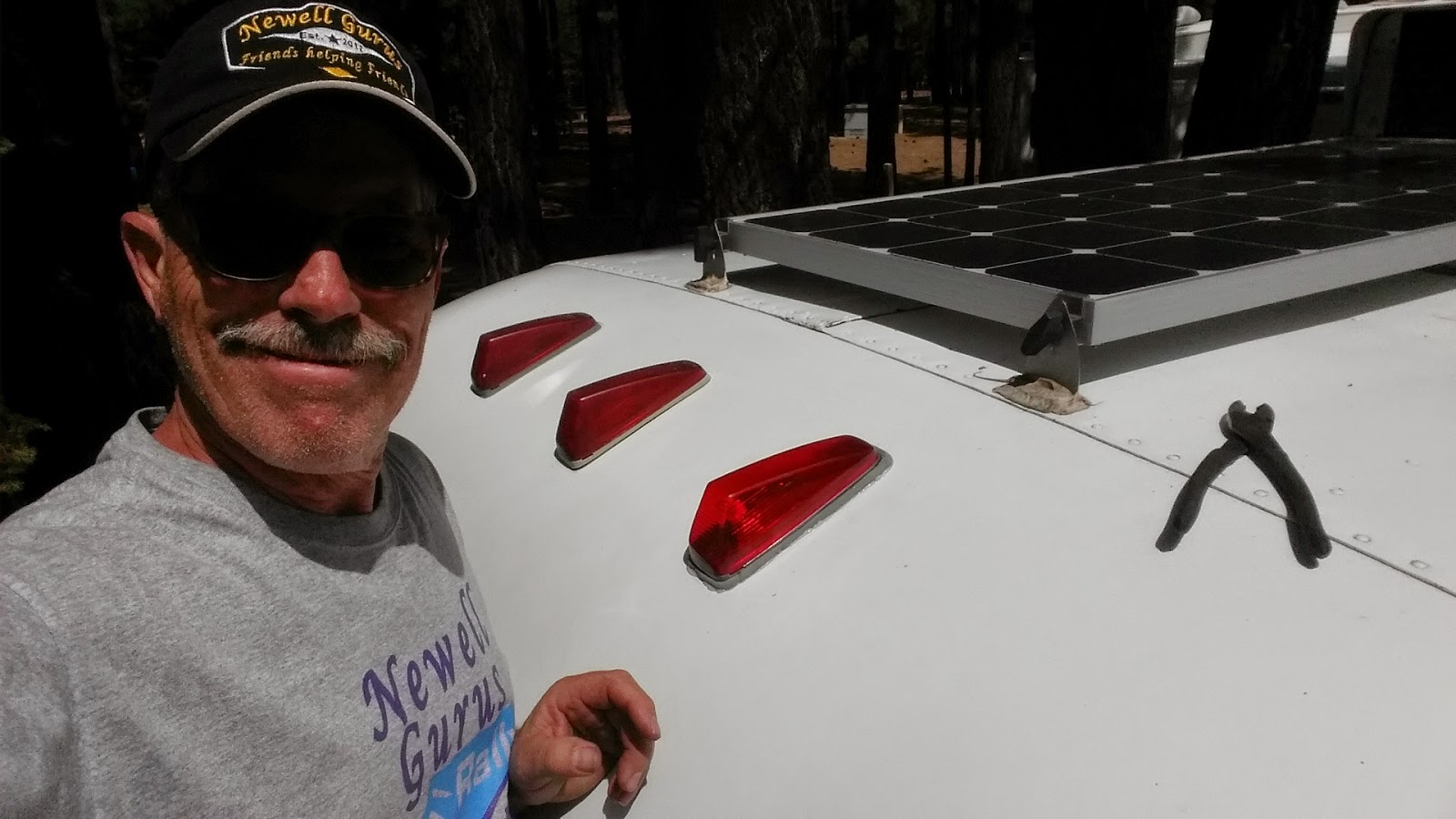 The light on the right is one of the new ones

I am eager to report that I estimated the job would take 2 hours, and it took slightly less than two hours.....no unforeseen complications.  We should be good now for another 30 years!

The weather here in SLT continues to be pleasant with daytime temps running from the high 60's into the high 70's.....in fact the forecast, or guess, for the next 10 days is nothing but low to high 70's with mostly clear skies.  So, it should be no surprise that we decided to call Thursday afternoon a beach day.  Our friends, Bill and Debby, had suggested we check out the beach at Tahoe Keys....I have driven by the Tahoe Keys Blvd. sign for decades and never driven down it, so Thursday we hopped on our Cannondales and rode the 3.5 miles over to the Tahoe Keys Beach, and we are so glad we did!  Once you reach the Marina area located on Venice you must take a compacted dirt path about a third of a mile the rest of the way to the beach, which thins out the number of people who will make that effort.  The result?  A beach that has a sort of "private" feel to it.  When we arrived there was just one other person on this balmy afternoon.

We sat on the beach under the shelter of a beach umbrella we have been carrying around with us for 27 months, but have only used maybe once before, reading and just enjoying the view.....I never get tired of this view.  It is hard to believe we have been here in SLT just shy of 2 weeks, and have 3 months to go in our sojourn.

We spent the evening watching a very exciting NHL game 6 between the N.Y. Rangers and Montreal Canadiens, which was won 1-0 by the Rangers, and then an NBA game 5 between the Spurs and Thunder, won in convincing style by the Spurs with a 28 point margin.

Thanks for stopping by!
Posted by Whatsnewell at 8:32 AM