Sunday we began our "last dance" here at Sioux Empire Fairgrounds for Monday we will be "gone with the wind".....I mean that literally.....we will be gone, and the wind will be gone.  I was thinking the other night about how it must have been living a couple hundred years ago on the prairie with the seemingly constant wind month after month, year after year.  Here I am after just 9 days wishing it would end.....well, finally, it has ended.....at least for a few days....and just in time as the other thing I do not want to do anymore is drive into a headwind or with a side wind.

When I opened the front curtains of the coach Sunday morning I saw that some sort of vintage car show and/or swap meet was in progress, so after finishing my daily blog entry I put on some warm clothes to walk over and see what was what.  It looked cold out the window, but was even colder than it looked.  The 39 degrees at 10:30 am combined with high humidity made it seem like it was in the 20's.

Most of the cars there were "been there, seen that" kind of cars, but this 1935 Lincoln Zephyr (I could be wrong on the year) really intrigued me.  I love the almost futuristic looking grill, and the fast back....what an elegant looking car!

Looks like the remnants of an old midget racer.....

After about 20 minutes I had walked up and down the various isles, seen what was what, and was ready to be back inside the warm coach.

Finally, around Noon the outside air temps were warm enough for me to begin the departure process of filling the fresh water tank up to maximum for our 1600+mile trip from here to South Lake Tahoe over the next 12 days......I know, huh?  That sounds like a lot of miles for us in 12 days, and you are right.....it is.  Other than a 3-4 day stop over at my brother's home near Salt Lake City we'll be moving every day for 8-9 of those days....we'll cover the first 1,000 miles to Salt Lake City by this Friday, which will give us a more leisurely jaunt from there to South Lake Tahoe over the next 5, or 6 days......more our style.

Once the fresh water tank was filled I started up the 6V92 DD so we could back up 5 feet and drop the trailer on the hitch once again.  Once that was accomplished, and I had re-leveled the coach I began the task of putting stuff away inside the trailer so we can re-insert the VW on Monday morning.  I'll wait until Monday morning to dump and flush the black tank, and then we will be on our way!

While TLE read I watched two more NBA game 7 matchups........the Toronto Raptors vs. the Brooklyn Nets, and then the late afternoon game between the San Antonio Spurs and the Dallas Mavericks.  It seems very strange not to see my L.A. Lakers playing this year.....it is rare they do not make the playoffs, and even more rare is the L.A. Clippers not only making the playoffs, but advancing to the second round.  Ultimately the Nets won a close game by one point, and the Spurs trounced the Mavericks.....so now it is on to the second round!

Around 5:30 we headed for our last time this trip over to Todd and Dawn's lovely home for our last meal with them, and one of my least favorite things.....saying our "until next times".  It never gets easier, and why should it?  We didn't get everything done on our two coaches that we had planned to do as a result of the mostly bad weather, but one thing we did do is become closer as friends.  Todd and I were talking the other day while working on his front bumper how except for us both buying Classic Newell coaches we would never have met and become friends.  We both agreed that with, or without the Newell connection we would be friends if.....and it is a big if......we both lived in Sioux Falls.  Todd is an insurance guy just like I was for decades, and we have a lot in common that connects us even if there was no such thing as a Newell.

We arrived back "home" around 8:30 kind of excited that we will be moving once again, and kind of sad that we will not see Todd and Dawn for another year.....how do I know it will be just a year?  Well there are plans afoot for another meetup on the road somewhere in the west whose details shall have to wait until another time. 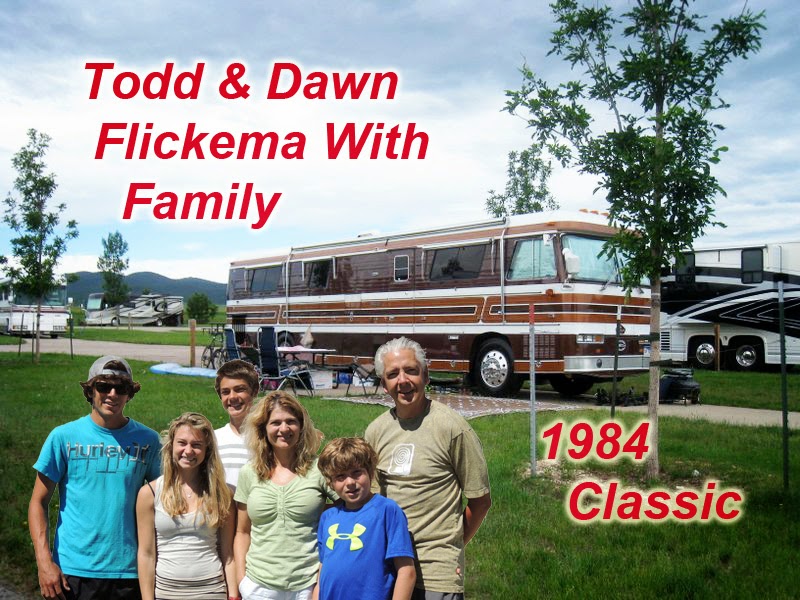 "Until next time" Flickema family!!

Posted by Whatsnewell at 6:49 AM