We were looking forward to Wednesday as it was to be the beginning of a warming trend....well, that was what the weather guessers guessed.  When I left on my first South Lake Tahoe training ride at 11:15 am it was still in the low 50's, but at least the sun was peeking out from behind the clouds.

As I rode north on California 89 towards Emerald Bay my ears grew numb from the cold, and frankly it looked like it could start raining at any time.  Around the 2 mile mark I picked up the bike path that parallels the highway, but runs through the forest for about 3.5 miles before you are forced back on to the shoulderless highway for the last 3 miles up to the Emerald Bay overlook.

I started out at around 6,300 feet at the park, but noticed as I rode north that the road descends down to just over 6,200 feet before you begin the daunting climb up to Emerald Bay.  Just after you re-enter the highway you begin a relentless climb, which turns into hairpin switch backs which are rated at 15% grades in places. For much of the last 3 miles I was fighting a 7-8% grade with short stretches between 13 and 15%.

The total distance from Tahoe Valley Campground to the overlook is exactly 8.64 miles, and from the lowest elevation point to the overlook you gain just over 700' in elevation.  It took me 49 minutes and 32 seconds to cover the distance.  Now that I have a bench mark I will try to improve on the time over the course of the summer.  Frankly, it took me less time than I was expecting....I have driven this road many, many times over the years, and it is a tough climb in a car, let alone on a bike.  All of the cars which passed me gave me plenty of room.  I'm not sure I would do this ride on a summer weekend when the traffic will be 10 times worse, but we'll see.  The ride back down the switchbacks was a little harrowing, and I reached speeds over 35 mph a few times....thanks goodness for the hydraulic disc brakes I have on my bike!

The time of day is incorrect...it was actually 12:05 pm
....I hadn't changed the time zone to Pacific yet

Lake Tahoe on the left and Cascade Lake on the
right....have always liked this view 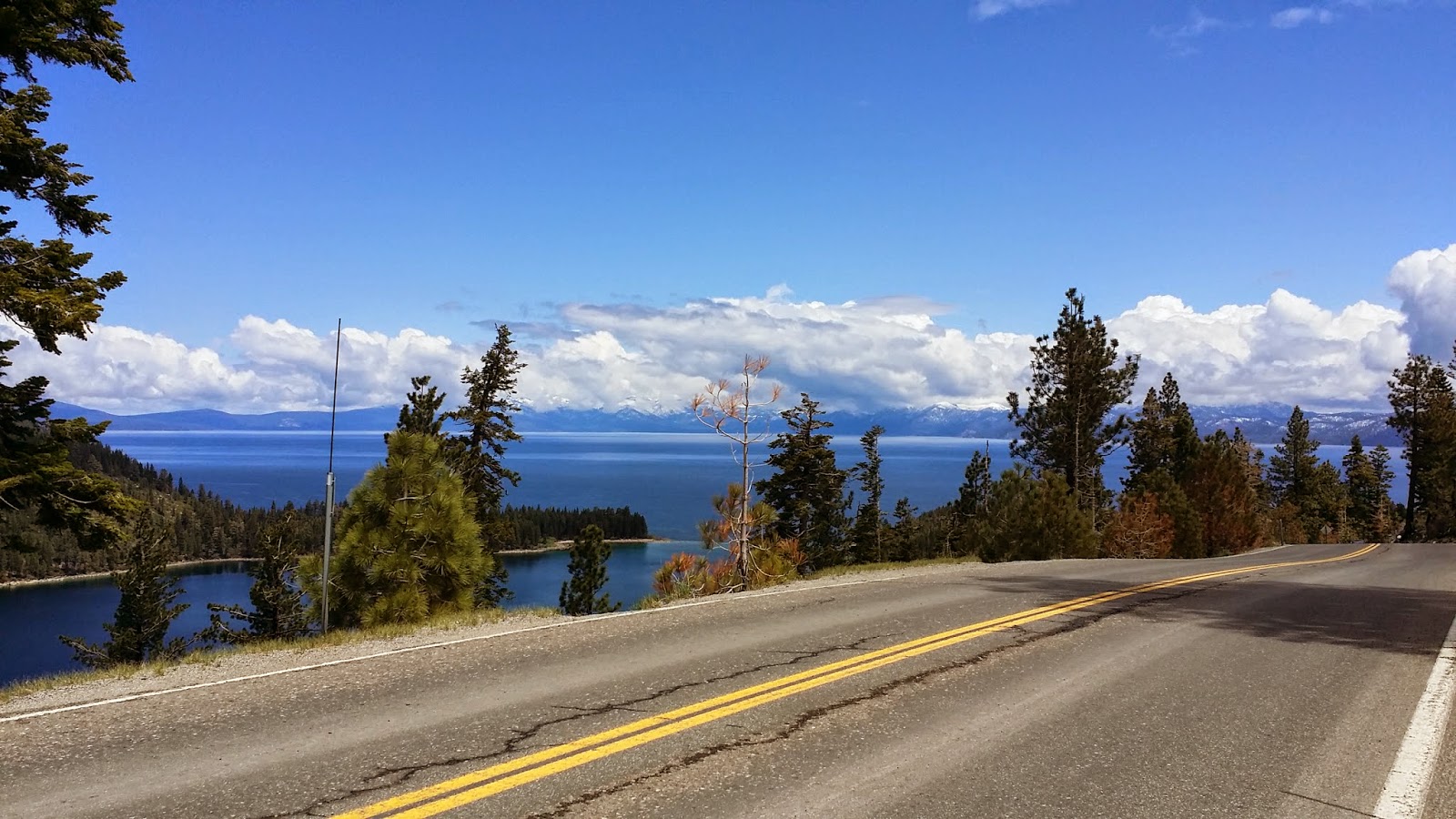 As luck would have it there is a Subway shop just a few blocks from the campground, so I stopped in on a whim on my way back to the campground, and picked up a foot long Club to split between lunch and dinner.  I'm not sure if I will continue that, or just stick to the basic diet I have been on since we left Rancho Jurupa back on March 3rd, which has enabled me to maintain my weight loss.  Now that I can add consistent exercise back into the equation I should be able to drop some more weight over the next 3 months.  In all I burned just under 1200 calories over the 17 mile ride.

I spent more time in the trailer doing more cleaning, whilst TLE did a thorough, deep cleaning of the coach.......eventually the creeping chill of the afternoon chased me back inside.  The temperature continued to drop into the early evening and there were occasional rain showers starting around 5:30 and into the rest of the evening, which stopped just before I got up at 7 am this morning.

We watched the season finale of "Revolution", a show which, according to reports, has been cancelled, so we don't know at this point if we will ever get to see how it turns out.  We also watched the season finale of "Survivor", which, in my opinion, was one of the best seasons they have had.  The winner, Tony, earned the $1 million dollar prize by "playing the game" every single minute of every single day for 39 days.

Posted by Whatsnewell at 9:30 AM