Just as we have experienced at other RV parks around the United States, when the end of the Memorial Day holiday weekend arrived Monday you can almost hear a giant woooshing sound as the weekenders are sucked out of the park by the giant, unseen "back to work" vacuum.  The XLTE *** is back its normal fast self, the campground WiFi is blazing fast again, the shelves of local stores have been re-stocked, and the local traffic is back to normal. 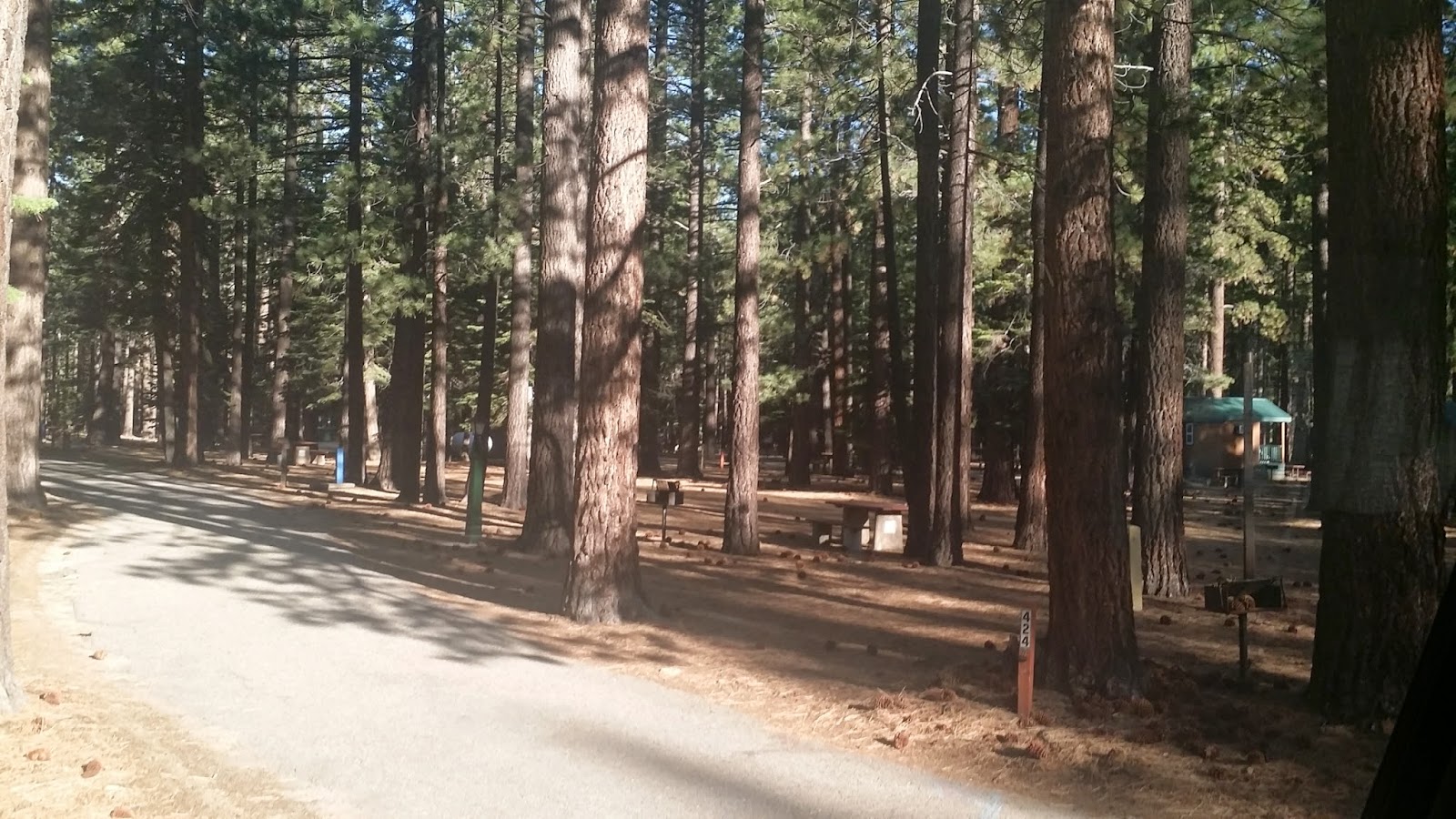 The first order of business Monday morning was to walk over to Raley's and buy a pound of "nitrate free" bacon to cook outside on our recently acquired, thrift shop special, Coleman propane stove.  It has been sooo cold in the morning until this weekend that cooking outside was not very appealing.  It's only about 1/2 mile to the store and we were back from our shopping foray within 45 minutes, firing up the Coleman, and cooking the bacon.  We prefer not to cook bacon inside the coach as it creates, over time, a greasy mess, so having the option of cooking outside is very appealing.

The second order of business was to get out the tandem, which we had not ridden since the end of January......just before my unexpected hernia surgery.  Our plan was to ride southwest on US 50 up to Meyers and back.  About 2.3 miles from the campground at the intersection with Elks Club Drive a bike path begins which runs the remaining 2.5 miles over to the far side of Meyers.

Of course, due to the aforementioned giant "back to work" vacuum doing its job US 50 was bumper to bumper with motorists returning to their workaday lives.  The traffic was moving so slowly I think we easily passed a 100 cars on our way to Meyers.  The shoulder is pretty decent all the way up to the bike path.  Meyers seems to be like a small bedroom community to SLT *.....there a numerous restaurants in Meyers, several of which we plan to check out in the future, especially one named "Divided Sky"....

On our return trip we passed by "C" street (the entrance to TVC ****) and headed north past the "Y" about a mile up towards "The Burger Lounge" where TLE announced that her "bum" was done sitting on a bike seat for the day, so we stopped in and ordered some fried zuccini with a couple of soft drinks.

Nothing like al fresco dining to put a smile on your face......

We were home by 2 having ridden about 13 miles on the tandem.  We are both looking forward to more tandem riding over the next few months.  After we had changed I went back out to clean my mountain bike (Intense 5.5) in preparation for another outing on Tuesday.  I found, however, that the rear tire on the tandem was flat......uggghhh.....why is it always the rear tire?  Apparently we ran over a staple on our ride......taking the rear wheel off the tandem is more involved than on regular single bikes because in addition to the regular rim brakes, the tandem also has a "drag brake" for extra braking power.  The "drag brake" must be unbolted from the frame before the wheel can be removed making this 10 minute job take more like 45 minutes.  I easily found the holes, patched them, and began the re-assembly.

By that time Debby came walking by to ask if we wanted to go for a walk along the Upper Truckee River around 7:30, and we answered in the affirmative.  TLE was preparing chicken for dinner when I got a text from Debby saying some of the workampers were going over to the "Flight Deck  Restaurant" (4 stars on Yelp) at the SLT airport at 5:30, and did we want to join them.....hmmm, that chicken was almost done.....well, we agreed to meet them around 6 after we ate, and just have drinks.  It was an opportunity to meet and get to know some of the other workers.  We had a great time getting to know Bob, Marilyn, Bubbles, Ranger, Billy and Wes better....what a great group!  Apparently they get together every Monday night for dinner, so we'll have to add that to our weekly routine.

On the way home we put in 7 gallons of gas at $4.14 a gallon.....ouch!  Thank goodness we are not doing a lot of driving....the last time we filled up was in Sioux Falls, SD a few weeks ago!

We watched the NHL L.A. Kings defeat the Chicago Blackhawks to take a commanding 3 games to 1 lead in the playoff series before watching the season opening show for Master Chef, and then the next episode of "24".