Our time here in Sioux Falls is fast coming to an end, and while it has been quite wintery most of our stay, we have gotten a lot done.  Friday it was time to help Todd with another of his projects.....install his new front bumper pieces.  Just as it is with our coach, Todd has a 3 piece front bumper.  This is made necessary by the need to be able to pull the generator out for service.  On my coach this is done manually, and requires that the middle piece of the bumper be first removed before pulling out the generator which is mounted on a slide.  In Todd's 2 year new coach he simply pushes a button and the air actuated slide moves out on its own. 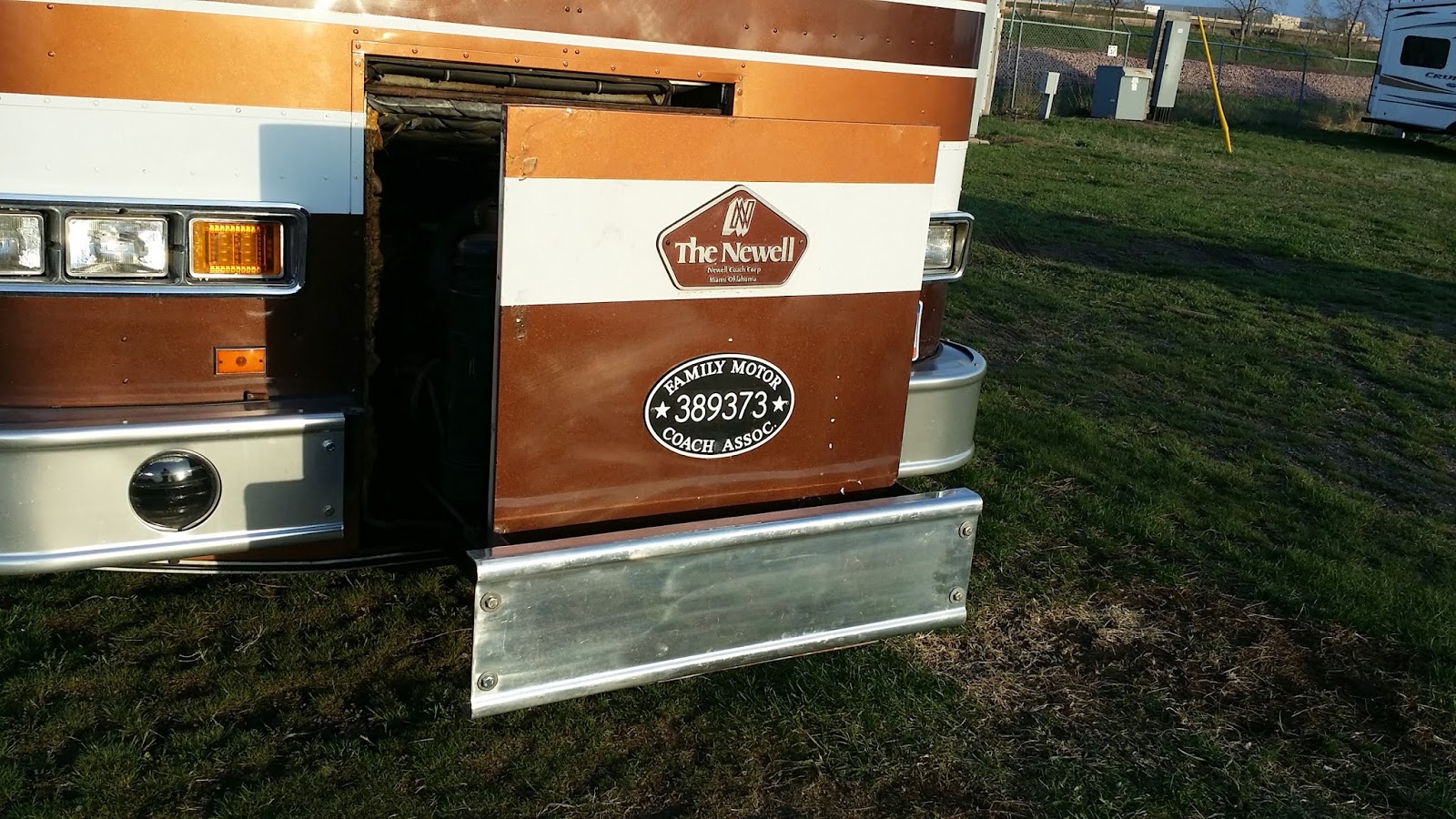 I didn't realize it at the time, but the two new bumper pieces Todd got are polished aluminum whereas the existing pieces, just like mine, are unpolished.  We both thought it would look a little odd to have two highly polished bumper pieces and a third not, so we decided to just install the new middle section, and attempt to straighten the left front piece.  The resultant effect at least gives the front a symmetrical look, and I think it turned out well. 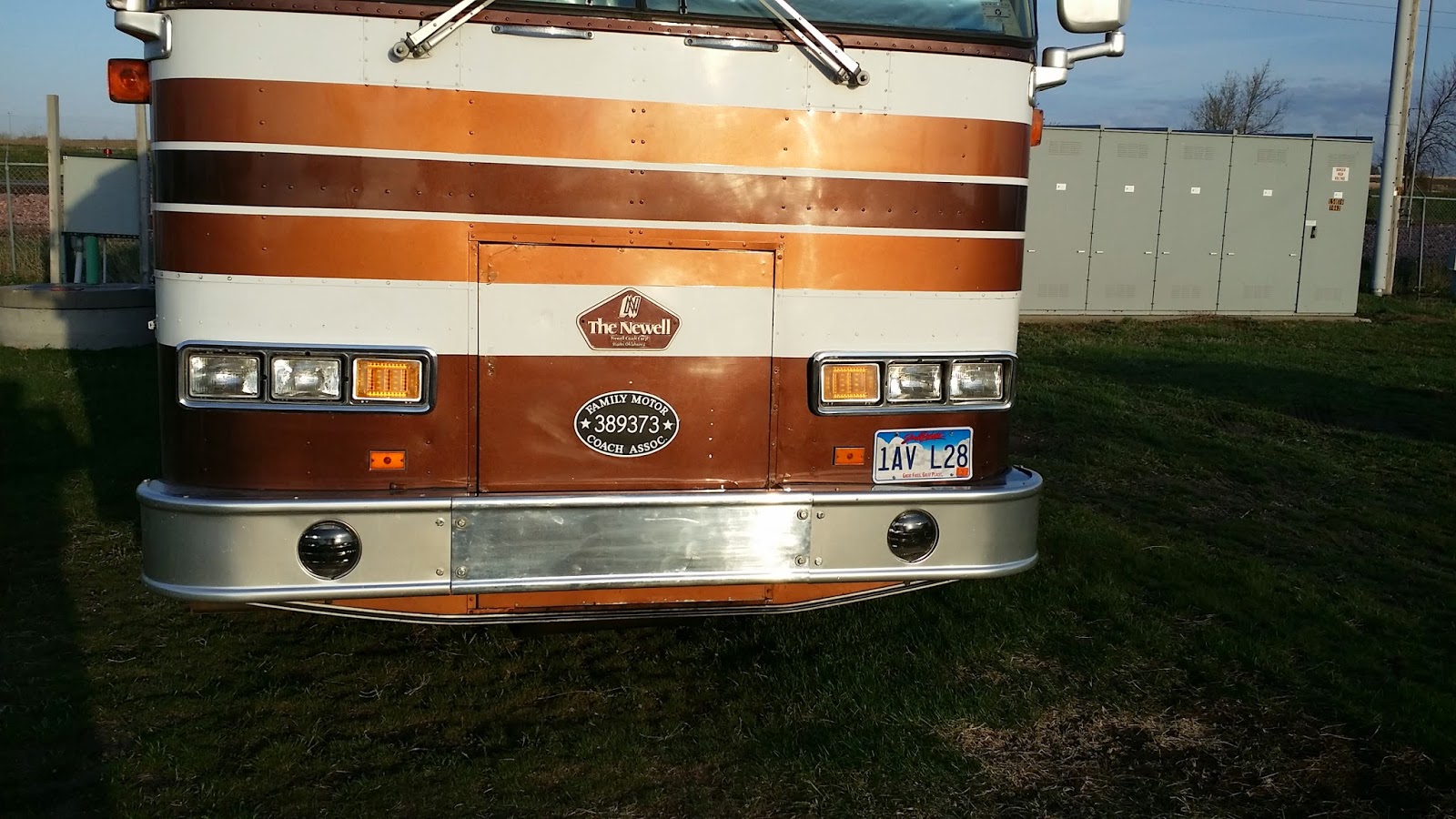 The old center piece was damaged, and as a result did not have a flush fit, but with the new piece installed the front end looks much, much better.   Of course, it took most of the afternoon to get this done with most of the time spent on the "fit and finish" aspect.  Finally around 5:30 we called it quits for the day and decided to meet up down town around 7 pm at Monks House of "Ale" Repute for appetizers and some brews.  Monks is our kind of funky, divey drop in place with a good draft beer selection.  They have a large outdoor seating area, but it was still a little windy when we arrived, so we sat inside.  TLE and I ordered a couple of pints of their Vanilla Porter which lived up to our expectations.  We also ordered a plate of their Green Bean Fries, and another plate of their Spring Rolls.  Both were very yummy!

As it turned out Todd's wife, Dawn, couldn't join us immediately as one of her lady patients (Dawn is a Family Practice MD) had gone into labor earlier in the afternoon, and she needed to stay with her, so it was just the three of us initially.  Monks gets 4 stars from Yelp and they are well earned.

Eventually we decided to take a walk over to a local eatery called Wild Sage Grille for some more appetizers and beer.  Their selection of draft beer was quite limited so I tried a Crow Peak "Pile -O- Dirt" Porter.....for a canned beer it was excellent!

To go along with the beer we ordered a plate of Walnut and Bleu Bruschsetta and a plate of Hot Artichoke Parmesan Dip.  Around 9:30 Todd got a call from Dawn saying the baby boy had been delivered, and she was on her way.  Within a few minutes Dawn arrived and we decided to move over to yet a third eatery, Parker's Bistro, for coffee and dessert....I had their Americano coffee, which was excellent.  We ended up closing down Parker's heading for our cars about 11:30.  It was a great evening full of good food, beer and conversation with good friends.  If the winters weren't so severe here in the land of two seasons (July and Winter) I could see myself living here in Sioux Falls.....it is a very cool town!

It was an evening that just kind of evolved, and in retrospect I cannot imagine doing it any differently than we did.

Thanks for stopping by!
Posted by Whatsnewell at 6:04 AM