Just as we did Wednesday, we awoke to clear skies Thursday morning.  This was the day we have been aiming for since March 24th when I called AM Solar to make an appointment to have additional solar panels installed.  After our more extensive dry camping/boondocking this past winter and spring when we learned much more about our electrical needs, and recharging needs we decided we needed to double the number of solar panels on our roof from 2 to 4, and our wattage from 300 to 620 in order to recharge our batteries more quickly.  Part of our reason for working so many hours this summer was to raise money outside our regular monthly budget to add the panels.

Originally we had a mobile installer (Mike Sylvester) for AM Solar (AM stands for Alternate Means) install our original system down in SoCal as we had no plans to be in Oregon until late that summer.  Mike Sylvester and his wife Lisa (The RV Guy) did the installation (I wrote about that experience here and here) which involved the running of power cables, installation of a Blue Sky charge controller, a Blue Sky system monitor, a breaker, and the solar panels themselves.  Initially we went with two 150 watt panels because we were just not sure how much we would dry camp/boondock, but wanted to get into it at some point to keep our costs down. 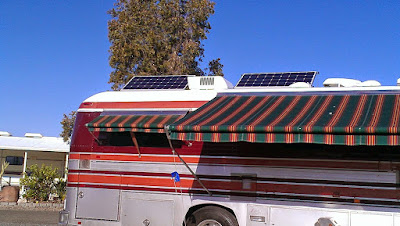 Just after our initial installation was completed

Finally in the winter/spring of 2014 we resolved to do some more extensive dry camping/boondocking in Arizona and Utah where there is a lot of sun that time of year.  We began to learn more about our system, and how to manage our electrical needs.  By that time I had converted our interior lighting to LED, and learned how to eliminate most of the parasitic loads every RV has.  Over the past two winters we learned that it was not only important to be in a place where sunny days are the norm, but it was also very important to situate your RV properly in relation to the sun, and even tilt the solar panels as needed to catch more sun.  It became obvious during the winter of 2014 that we would need more wattage on the roof to not only overcome the basic, necessary electrical draws in our coach, but to put more amps back into the batteries at the same time.  It would take us until late morning to overcome our normal, minimal electrical usage to begin returning power to the batteries.  With more wattage we can get to that point earlier in the day, thereby charging our batteries back to 100% more often.

Around 0900 Cody came out to let us know it was time to move our coach inside their massive shop so they could get to work.  After that was done he spent time going over what they would be doing, how I wanted the panels positioned on the roof, and all of the costs involved in what they would do.  We agreed upon the system upgrades to accommodate the two additional panels and while they got to work we got dressed and headed out for four hours to give them time to install the new charge controller inside the coach........ 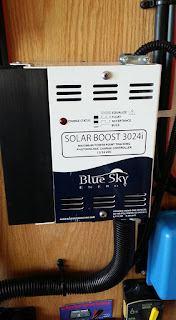 ....the first order of business for me was to get a haircut.....the last one I had was the third week in August and I was getting shaggy!  Amazingly there was a Supercuts just a few blocks from Am Solar.....we arrived just after 1000 hours and they were busy, so we made an appointment to return at 1130 for my haircut and set off to do some exploring.

We wanted to find a local dry camping spot where we can spend the next two days checking out our upgraded solar system to be sure everything is working properly, so if something came up we could easily return and have the problem fixed.  I don't anticipate that happening, but common sense dictates we take this course.  I checked Free Campsites.net to see what was available in the Springfield/Eugene area and what do you know....there was such a place just a few miles from here on the shores of the Willamette River at the Valley River Center.  The review I came across is located here, and not too surprisingly was written by a good friend of ours, Nina Fussing who writes a blog entitled 'Wheeling It'.  Since we had 90 minutes before my hair appointment we decided to drive over to the Mall to check out the free parking area.  As the review advises you can park there for two nights free of charge. 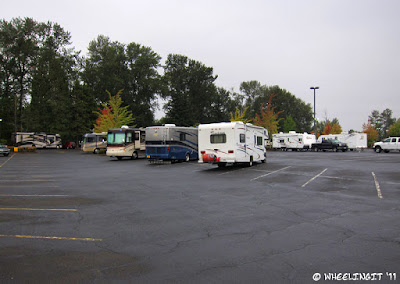 The access to the overflow parking area is quite easy even for big rigs such as ours, and will be perfect for our two day stay before we head north!  From there we headed over to a bakery called '100 Mile Bakery' to buy some sourdough bread.....the same sourdough bread that was on TLE's 'Brats and Sauerkraut' the night before.....it is really yummy.  We came away with two loaves, and then headed back to Supercuts where I got my ears lowered, then over to Fred Myers to fuel up the VW and do some grocery shopping, then back to Carl's Jr. to have lunch.  From there we wandered over to the local Goodwill on 30th Street in Springfield.....again not that far from AM Solar......to browse for a while.  I ended up with two additional t-shirts (long and short sleeve) and for TLE a pair of shorts, and a couple of T's.  This is a really nice Goodwill....check it out if you are in the area.

By the time we arrived back at AM Solar they had installed the new Blue Sky charge controller, connected it to the Blue Sky monitor, installed the new breaker and were just taking the two new solar panels up to the roof to install. 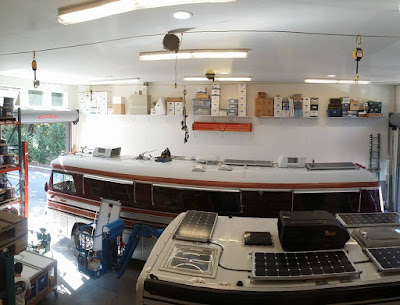 New panels loaded on the lift

Our plan was to move the panel on the rear of the coach, which was centered on the roof in the original installation, to the driver's side, and then install one of the new panels to its right.  The second new panel was to be installed just behind the Winegard satellite dish, but offset to the driver's side to allow for operation of the dish, and that is exactly how it turned out. 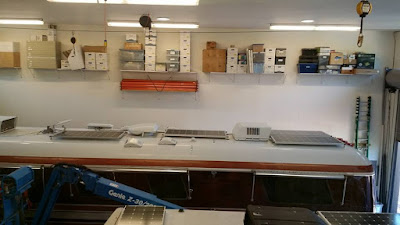 The new panels in place just as we discussed

In all the work took just 6.5 hours, and we were back outside by 1800 hours.....just in time for me to watch Thursday night NFL football!  Friday we will move a few miles over to Valley River Center to test out our new setup.....YAY for us!

Thanks for stopping by!
Posted by Whatsnewell at 8:31 AM