So, to put the aforementioned worries in perspective, here is what our Thursday travel day looked like.  Our flight out of GEG was scheduled for 0735 hours which means we needed to arrive at the airport by 0635, which meant we had to leave the coach by 0545 for the half hour drive to the long term parking lot where we would leave our car so we could catch the shuttle over to the Southwest terminal by 0615, which means I had to get up at 0415 to be ready to make the drive.  All of that went smoothly until we began to proceed through the dreaded TSA security line......according to our boarding passes we were 'pre-checked' and could go through the expedited line, meaning we did not have to take off our shoes, any clothing, and did not have to take our computers out of our bags......of course, I go through the metal detector and the light goes off......I had no metal on my person, but was advised I had been randomly selected for 'additional screening', which meant I had to have my hands swabbed......see.....it never goes smoothly for me.   We arrived at our gate about 60 minutes prior to our flight, and all was fine until we heard someone announce over the PA system that the inbound plane....the one we would take to Oakland.....would arrive 15 minutes late in Spokane.  Our connecting flight to ONT (Ontario) was schedule to depart just 35 minutes after our scheduled arrival arrival time in Oakland, so now that interim time had been cut to 20 minutes.  That means that our checked luggage has a greater chance of not being transferred successfully to our connecting flight......so the worrying has begun....even though in all the years I have been flying I have never had any checked luggage lost...NEVER.

As it turns out we arrived in Oakland just a few minutes late, and our connecting flight was in the gate right next to our arrival gate.......we and our luggage made the transfer with plenty of time to spare.  We actually arrived 10 minutes early at ONT along with our checked luggage, and were in our Budget rental car within 30 minutes headed to our son's office up in Rancho Cucamonga to pick up our mail, and the renewal license tags for the Newell.

In the end, it all worked out, and there was really nothing to worry about, but that is my nature.....I do worry about the unexpected, even though at times I claim I don't.......reminds me of the recent Miller Lite commercial featuring Troy Aikman (former great Cowboy quarterback) in a store buying beer.  Another customer comes up to him saying what a great quarterback he was, and Troy responds "I don't like to dwell in the past, but thank you anyway......".....then, unexpectedly, you hear the audio of his cell phone in his pocket replaying over and over again an audio clip from one of his great performances back in the 90's.....he sheepishly turns to the customer and says......."I dwell in the past.....".

We spent a few minutes chatting with our son, Chris, at his office and then were on our way to my daughter, Katie's home where we will stay while we are in SoCal for her wedding. When we arrived she was out running errands, so since we had last eaten at 0500, and it was now closing in on 1300 we decided to head over to one of our favorite local restaurants for a late lunch.......'The Salted Pig'.  They have 10-12 small chalkboards up on the wall where they list their featured draft beers for the day, and the first one on the board was 'DogFish Head Punkin'.....well, that was an easy choice, so we ordered two.    For lunch TLE ordered the Brisket Sandwich, and I ordered 'The Pig 2.2' with fries......for an appetizer we ordered 'Ale Battered Dates'......since we were eating soooo laaaaate, and did not plan to eat dinner we went for it! 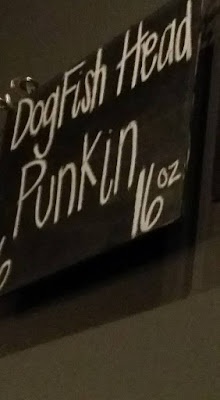 We just sat there talking, unwinding, sipping our draft brews, and feeling happy.  After lunch we decided to head down the street to Trader Joe's to pick a few things for the next few days.....normally it would have been a 10 minute drive, but this is SoCal at 1530 hours......it took us 35 minutes to weave our way through mind numbing rush 'hour' traffic to arrive at TJ's by 1605 hours.....it's always nice to be reminded of why we prefer not to live in SoCal anymore.  'Rush hour' traffic is really a misnomer.......the rush hour in SoCal really begins around 1400, and goes until after 1900 hours on most week days (M-F).

At any rate, we arrived back at Katie's home around 1630 to await her return, and she was home by 1700.  Her home is full of all the makings for her wedding, so for the next couple of days we will be walking over, and around boxes, flowers, party favors, etc. 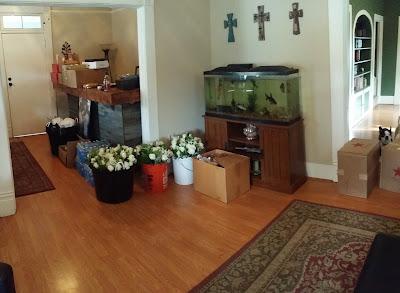 The wedding preparations are underway!

My Dodgers lost a heart breaking, hard fought, well pitched game 3-2 to the New York Mets, so that part of the MLB post season is over for me.....now I can enjoy the rest of the playoffs.  On the other hand, the underdog New Orleans Saints easily defeated the heavily favored Atlanta Falcons on Thursday Night Football (TNF).

Thanks for stopping by!
Posted by Whatsnewell at 9:09 AM