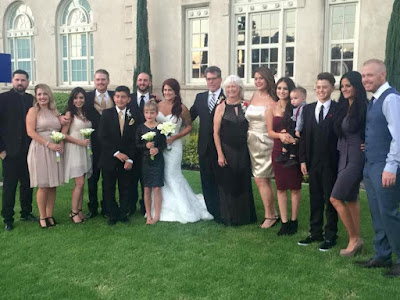 A great picture of the Hockwald clan from the wedding

First thing Monday morning we said 'until next time' to Katie and Nick as they set out on their driving honeymoon to South Lake Tahoe, then met our oldest daughter, Meredith, for a late breakfast around 1000 hours at a cool breakfast place called Corkey's Homestyle Kitchen in Eastvale (near Corona), and then headed up to our son's office in Rancho Cucamonga to pick up a piece of luggage we had been storing in his office warehouse for the past few years.....the wheels on our current luggage broke on the trip down from Spokane. 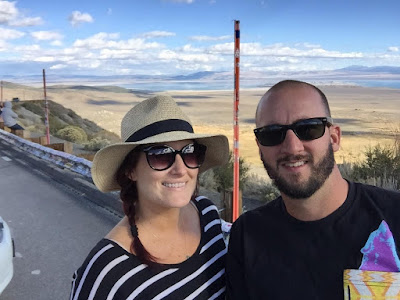 Katie and Nick stopped to take a picture at the top of Conway Summit looking back at Mono Lake, a family tradition.

On our way home from Chris' office we decided on the spur of the moment to head for the local Edward's Theater to see 'The Martian' (Matt Damon)......what a great movie!  IMDB gives the movie 4 stars, and both TLE and I would heartily agree.  We don't go to see too many movies on the big screen, and this was only the first time this year we have done so.....our last movie was on Christmas day last year.  The premise of the movie has Matt Damon left behind on Mars when his fellow astronauts depart thinking he has died.  It runs 2 hours 20 minutes, but the time will fly by for you.

Around 1700 we met our other two children (Sharon and Tim) along with their significant others for dinner at Don Jose's in Montclair to complete Monday's 'until next time' tour. 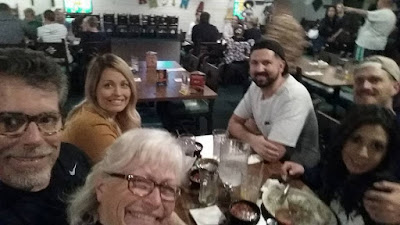 Each year we, as a family, attend a movie on Christmas Day, or the very next day, depending on everyone's schedule.....we have decided to go and see the next installment of the Star Wars franchise (The Force Awakens). My daughter, Meredith, went on line (Fandango) Monday night to buy all the tickets when they went on sale, and just barely completed the transaction when the site crashed due to so many people buying tickets.  At least we got ours.....December 26th will be here before you know it!

It was a great day to say 'until next time', especially knowing that we will be back in just a month for the holidays, and more hugs......life is very good for us and for our children.

Tuesday we will jet back to Spokane to visit with my mother and my sister's family before beginning our multi week trek southward back to SoCal.  We are hoping to do some dry camping, and boondocking along the way to get a better feeling for how our investment in our expanded solar array will work at recharging our battery bank in a shorter period of time.

Thanks for stopping by!
Posted by Whatsnewell at 6:46 AM